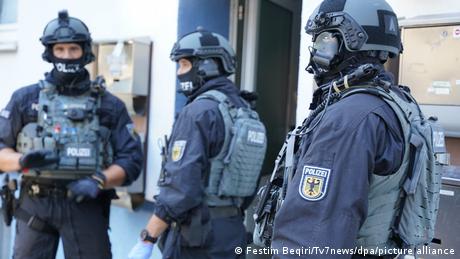 German police launched a "large-scale operation" early on Tuesday morning in the "fight against people smuggling," according to a police statement.

Police in Osnabrück said the searches focused in and around the northwestern city, as well as Bremen, also in the north, and Stuttgart, capital of the state of Baden-Württemberg, in southwestern Germany.

Police in Britain, Belgium, France and the Netherlands were also involved, according to the statement.

A spokeswoman for Osnabrück's police told DW that the operation concerns international smuggling efforts, and that it was "not wrong" to suggest that it was in connection with people smuggling from Europe across the English Channel, as reported earlier in local media.

However, police said they could only provide limited details and that they planned to release more information later on Tuesday.

The operation has been conducted in coordination with Europol — the EU's law enforcement agency — and Eurojust — the European Agency for Criminal Justice, the Osnabrück police statement confirmed.

His comments came after a boat capsized in the English Channel, killing 27 people trying to reach Britain.

Five suspected smugglers were arrested as a result, with one of them having a car registered in Germany. Darmanin went on to say, with France facing pressure on the issue from Britain at the time, that many of the smuggling activities were in fact rooted in France's western European neighbors.