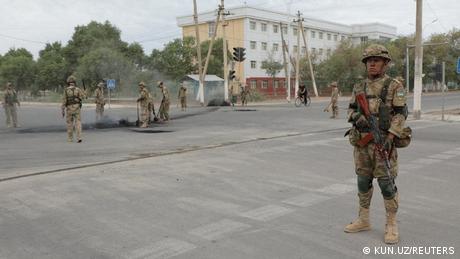 Protests erupted in the northwestern province's capital Nukus after news that fresh constitutional amendments would curtail the province's autonomy by taking away its right to secede.

Some 243 were also wounded, and authorities detained 516, before releasing most of them, as per a press briefing by the national guard press office.

Local media in Karakalpakstan had earlier cited opposition figures as saying "thousands" had been hospitalized.

Uzbek President Shavkat Mirziyoyev rowed back on plans to amend the constitutional articles addressing Karakalpakstan's autonomy after the protests.

The parliament has also voted to extend the public discussion on the draft constitution for a further 10 days. It shall continue until July 15.

Karakalpakstan takes its name from the Karakalpak people. They now constitute a minority in the region of roughly 2 million people.

What other changes are expected in the new constitution?

Uzbekistan, home to roughly 35 million people, is Central Asia's most populous country. The majority of them are Muslim.

Beyond changes to the Karakalpakstan region's status, Uzbekistan's new constitution is also expected to reintroduce seven-year terms for the presidency, up from five at the moment.

This amendment is likely to benefit Mirziyoyev, who has styled himself as a reformer who wants to reverse some of his hardline predecessor Islam Karimov's policies.

Karimov, whom Mirziyoyev served as a prime minister, died in 2016.

The clashes which followed the Friday protests represent the most significant challenge to Mirziyoyev’s rule since his rise to power.

He has since visited the autonomous province twice. During his second visit on Sunday, he accused those behind the protests of attempting to "seize the buildings of local government bodies," saying they were "hiding behind false slogans."