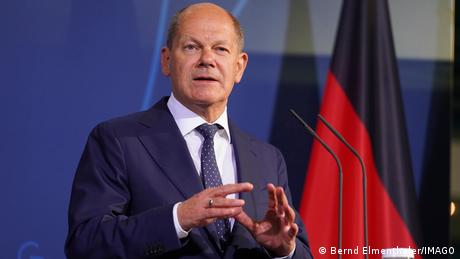 The article was last updated 03:36 UTC/GMT

Ukrainian President Volodymyr Zelenskyy said his participation in November’s G20 summit in Indonesia depends on whether Russia will attend the gathering.

"Our participation depends on the Russian Federation, whether it will be there," Zelenskyy was quoted as saying by the Interfax-Ukraine news agency.

Indonesian President Joko Widodo, the summit's host, issued an invitation to Zelenskyy during his visit to Kyiv last week.

"I told the Indonesian president that we are grateful for the invitation, but we have a security situation," Zelenskyy said, adding that he doubted many leaders would attend the summit if the Russian president planned to be there.

Russian President Vladimir Putin has already signaled his intention to attend the G20 summit. But it remains unclear whether he plans to attend the event virtually or in person.

Leaders from dozens of countries, international organizations and the private sector are meeting in Switzerland to discuss a recovery plan for Ukraine.

The two-day conference had been planned well before Russia launched its full-scale invasion on February 24. It had originally been slated to discuss reforms in Ukraine, but after the war began the focus was shifted to reconstruction.

Rebuilding Ukraine once the war ends is expected to cost hundreds of billions of dollars.

The effort will require "colossal investments," Zelenskyy said at the weekend.

Kyiv School of Economics has estimated the damage done so far to buildings and infrastructure at nearly $104 billion (€100 billion).

It estimated that at least 45 million square meters of housing, 256 enterprises, 656 medical institutions, and 1,177 educational institutions had been damaged, destroyed or seized, while Ukraine's economy had already suffered losses of up to $600 billion.

Ukraine's ambassador to Switzerland Artem Rybchenko said ahead of the conference that it would help create "the roadmap" to his country's recovery.

Scholz: Russia can wage war for a 'really long time'

Chancellor Olaf Scholz said Russia's decision to invade Ukraine was made "one year before it started or possibly earlier," adding that he believes Moscow will be "able to continue with the war for a really long time."

During an interview with CBS News' "Face the Nation," Scholz also defended Berlin's delays in delivering weapons to Ukraine.

He said the wait was due to the need to train Ukrainian soldiers in Germany.

"We will always see that Germany is one of the countries that is doing the most, because what we are sending now is the most sophisticated technology you can use," Scholz said.

He also admitted that it had been a mistake by European countries to become so dependent on Russian energy.

"We should have invested all over Europe in infrastructure that gives us the ability to change the supply, from one day to the other," he said. "This is the lesson that has been learned... be prepared for a situation like this."

The UK will host a conference next year focused on helping Ukraine recover from the damage caused by the Russian invasion, the Foreign Office said.

This year’s Ukraine Recovery Conference is taking place in Switzerland from Monday.

The meeting brings together representatives from Ukraine and other nations as well as international organizations and civil society groups.

"We have led on support for Ukraine during the war and will continue to lead in supporting the Ukrainian Government’s Reconstruction and Development Plan," Foreign Secretary Liz Truss said in a statement.

The Foreign Office said Britain had been asked by Ukrainian President Volodymyr Zelenskyy to champion the recovery of Kyiv and the surrounding region.

Ukrainian President Volodymyr Zelenskyy confirmed that his forces have withdrawn from Lysychansk, the last holdout city in the eastern Luhansk region.

German Chancellor Olaf Scholz said Berlin was discussing with allies what security guarantees can be given to Kyiv when the war is over.

German President Frank-Walter Steinmeier spoke out against urging Ukraine to negotiate an end to the war. Moscow has accused Western nations of preventing peace negotiations, thus dragging out the conflict.

Several people died when Russian troops shelled Slovyansk in the eastern Donetsk region, which the Ukrainian military described as the "biggest" bombardment in recent times.