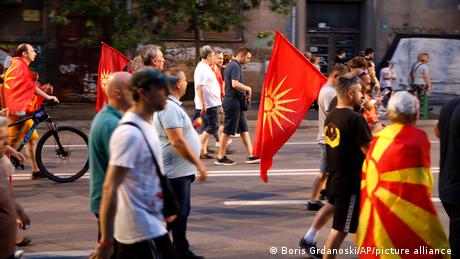 Thousands of people joined protests in North Macedonia over the weekend against a French proposal that could clear the way for the southern Balkan country's accession to the EU.

Protests were led by the nationalist, right-wing opposition party VMRO-DPMNE on Saturday and Sunday.

The protesters oppose a French proposal to resolve conflicts with Bulgaria over questions of national identity, language and history which Bulgaria — already an EU member — has been using to veto North Macedonia from starting formal talks to join the bloc.

"We do not need Europe if we have to be assimilated," opposition leader Hristijan Mickoski said on Saturday. "The answer is no for the latest French proposal."

What is the French proposal on North Macedonia?

Bulgaria has demanded that Skopje recognize the Bulgarian roots of the Macedonian language — which it considers a Bulgarian dialect — and to acknowledge the rights of North Macedonia's Bulgarian minority, including stopping "hate speech" against Bulgaria.

French President Emmanuel Macron announced that a compromise had been found during the NATO summit in Madrid earlier in the week. It would include securing the rights of the Bulgarian minority.

North Macedonia's Foreign Minister Bujar Osmani said the proposal should be accepted as soon as possible to go ahead with EU accession talks.

But the nationalist opposition VMRO-DPMNE said the French plan amounted to legalizing the "assimilation of the Macedonian people."

"If Europe is not ready to accept us civilized Macedonians where we belong, then we will wait until there are people who will understand that Macedonia and Macedonian identity is above and before all," the right-wing party's leader said.

The country has been a membership candidate for 17 years. Acceptance into the bloc requires unanimous approval from all 27 members.