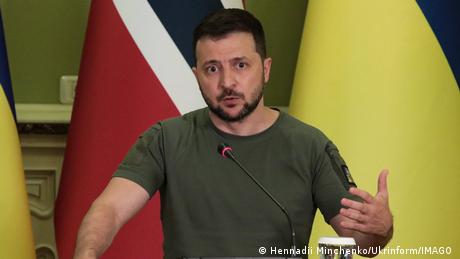 The article was last updated 02:23 UTC/GMT

Ukrainian President Volodymyr Zelenskyy delivered a message of hope in his nightly address on Sunday, saying no matter how "difficult it is for us today, we must remember that there will be a tomorrow."

He called for international humanitarian aid so Ukrainians could rebuild their lives once again.

"It is necessary not only to repair everything the occupiers have destroyed but also to create a new foundation for our lives: safe, modern, comfortable, accessible."

Leaders from dozens of countries are set to meet in the southern Swiss city of Lugano from July 4 to 5 to lay the groundwork for Ukraine's recovery. The Ukraine Recovery Conference 2022 was renamed in light of Russia's invasion this year, but would otherwise have been the fifth installment of the Ukraine Reform Conference, past editions of which took place in London, Copenhagen, Toronto and Vilnius.

Belarusian President Alexander Lukashenko accused Kyiv of firing at its military facilities, but failed to provide any evidence.

Russia and Ukraine made competing claims over the key eastern Ukrainian city of Lysychansk in the Luhansk region.

Russia said it "completely" encircled the city, but Ukraine's army denied the claims, saying it was still under the control of the Ukrainian army.

Russia has focused on seizing Lysychansk as part of its campaign to claim full control of Luhansk, one of the two areas that make up the eastern Donbas region.

A German official warned that Russia could be planning to use a regular 11-day maintenance break on the Nord Stream 1 gas pipeline, from July 11, as an opportunity to cut gas supplies to Germany.