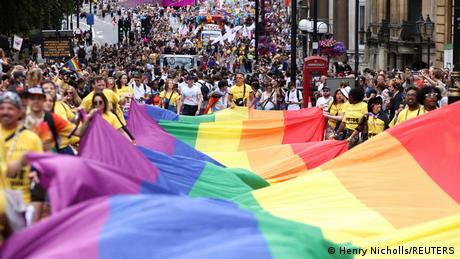 More than a million people flocked to central London on Saturday for a record-breaking 50th-anniversary Pride parade.

The three-hour-long procession retraced part of the route of the first Pride parade in 1972 and was led by veterans of the fight for the rights of lesbian, gay, bisexual and transgender people as well as those questioning their sexuality or gender identity (LGBTQ).

More than 600 groups and an estimated 30,000 participants danced, sang and rode floats, forming a spectacle of rainbow flags, glitter and sequins.

Among those marching was a contingent from Ukraine, who criticized homophobia in Russia.

This year's parade was the first since the COVID-19 pandemic and those taking part were urged to take a lateral flow test due to rising virus cases across Britain.

The UK Health Security Agency had issued a similar caution for people showing possible symptoms of monkeypox. A surprise global outbreak in 53 countries has seen multiple cases among men who have sex with other men.

'More to be done' for LGBTQ rights

Chris Joell-Deshields, the director of organizers Pride in London, said "momentous" rights and freedoms had been earned since the inaugural event, "but there is more to be done."

UK Prime Minister Boris Johnson called the 50th anniversary a "milestone," and paid tribute to the bravery of those who arranged the first events.

London Mayor Sadiq Khan told reporters the event was a celebration of community, unity and progress.

But he said it was also a reminder of the need to "campaign and never be complacent."

"We saw this time last week an attack in Oslo just hours before that parade, where two people lost their lives and more than 20 were injured," Khan said. "So, we've got to be conscious of the fact that there's still a danger to this community of discrimination, bias and violence."

The London parade was followed by a concert in Trafalgar Square on Saturday evening.

It took place just five years after homosexuality was decriminalized in the UK.

In the 1980s, the campaign would go on to fight against then-Prime Minister Margaret Thatcher's legislation against the "promotion of homosexuality" in schools.

It also helped to raise awareness and support for people with HIV/AIDS.

Now, as LGBTQ people in the UK experience greater inclusion and equality, Pride in London is more celebration than protest.

Parade criticized as too commercial

Peter Tatchell, a veteran gay rights campaigner who took part in the first march, said some from the original event have boycotted the modern-day sponsored version as "depoliticized and commercialized."

Tatchell said that despite victories such as same-sex marriage, "we are still fighting to ban LGBT+ conversion practices which seek to change a person's sexual orientation or gender identity."

"We're still fighting to secure trans people's right to change their legal documents with ease by a simple statutory declaration. And of course, we are standing in solidarity with a global LGBT+ movement," he told Agence France-Presse.