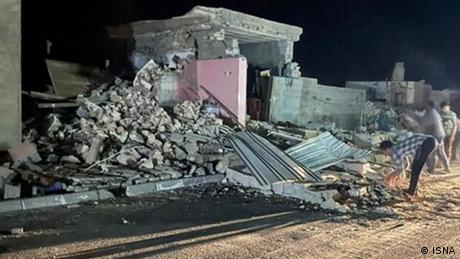 "Five people have died in the earthquake ... and so far 12 are hospitalized," Mehrdad Hassanzadeh, head of emergency management in Hormozgan Province on Iran's Gulf coast, told state television.

Iranian media put the strength of the quake at 6.1 while the European Mediterranean Seismological Centre (EMSC) and the US Geological Survey (USGS) both put it at 6.0. Small measuring variations like this are common.

The quake was relatively shallow at a depth of roughly 10 kilometers.

Aftershocks continued after the quake

The quake's epicenter was in a sparsely populated area of Iran, roughly 100 kilometers west of the nearest major city, Bandarabbas.

Rescue teams were deployed near the epicenter, Sayeh Khosh village, which is home to around 300 people in Hormozgan province.

People went into the streets as aftershocks continued to jolt the area after the early morning quake, which also damaged buildings and infrastructure.

Iran is an area of seismic activity

One person was killed in November last year when Hormozgan province was hit by twin 6.4 and 6.3 magnitude quakes.

Iran's deadliest quake was a 7.4-magnitude tremor that struck in 1990, killing 40,000 people in the north of the country.