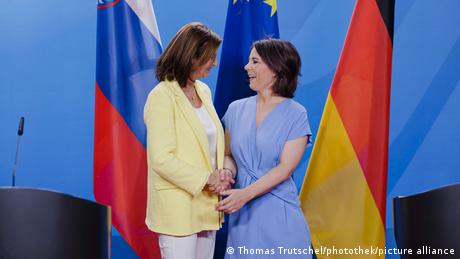 German Foreign Minister Annalena Baerbock said on Friday that the European Union should accelerate discussions about bringing the Western Balkan states closer to the bloc. Alluding to both Russia and China, she said if the EU does not keep its promises to these countries, someone else will offer new ones.

"No niche must be created in the Balkans in which Russia or other actors can settle," Baerbock said.

The EU should keep its promise to open accession negotiations in particular with North Macedonia and Albania, according to Baerbock.

"It is in our own strategic interest and also a question of credibility," she said.

The 27-member bloc agreed to start talks in March 2020 but has made little progress so far.

Accession talks are already underway with Montenegro and Serbia.

Von der Leyen: Speed of ascension 'in their hands'

European Commission President Ursula von der Leyen said, "The speed of the accession process or the speed of the progress is in their hands," referring to countries willing to join the EU during a visit to the Czech Republic, which started its presidency of the Council of the European Union on Friday.

She explained that it took the current EU members different lengths of time to join the bloc, from four to 10 years, and stressed that some of the nations eyeing EU membership have not made any progress for 20 years.

In order to join the EU, countries often have to make a number of political and economic reforms and agree to all of the bloc's treaties, amongst other hurdles. In the absence of EU leadership in some Balkan countries, both Moscow and Beijing have been trying to expand their influence in recent years.

Most recently, the EU accepted ascension bids from Ukraine and Moldova.