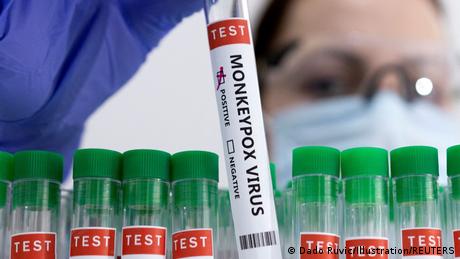 The World Health Organization (WHO) said on Friday that Europe needs to take "urgent" action against the spread of monkeypox after the number of cases tripled in two weeks.

"Today, I am intensifying my call for governments and civil society to scale up efforts in the coming weeks and months to prevent monkeypox from establishing itself across a growing geographical area," WHO Regional Director for Europe Hans Kluge said.

"Urgent and coordinated action is imperative if we are to turn a corner in the race to reverse the ongoing spread of this disease," he added.

Fear over spread to vulnerable people

The WHO's Europe chief said that 31 countries in the European region had now identified cases.

He also reported that around 90% of known infections have been reported in Europe.

The US Centers for Disease Control and Prevention have recorded more than 5,000 cases in 51 countries worldwide.

Kluge said that almost all cases were reported in men, especially men who have sex with other men, but that a "small number" of cases have appeared among household contacts, including in children.

While most people who catch the virus experience symptoms such as rash, fever, fatigue, muscle pain, vomiting and chills, children and pregnant women are believed to be more vulnerable to severe cases of the disease.

WHO Europe calls for more surveillance of outbreak

The WHO has not declared monkeypox a global health emergency, but Kluge called on European countries to increase their surveillance of the outbreak, including boosting genetic sequencing capacities to quickly identify cases.

The European Medicines Agency (EMA) is currently looking into whether a certain smallpox vaccine is effective against monkeypox. The WHO has warned that supplies of the vaccine are low.

Germany and the UK, among others, have already started vaccinating vulnerable people.

Reports of the virus outside of Africa were rare until May. It is considered endemic in several African countries and has been sickening people in parts of central and west Africa for decades. The lack of surveillance and laboratory diagnosis, however, means many cases go undetected. To date, countries in Africa have reported more than 1,800 suspected cases so far this year including more than 70 deaths, but only 109 cases have been lab-confirmed.