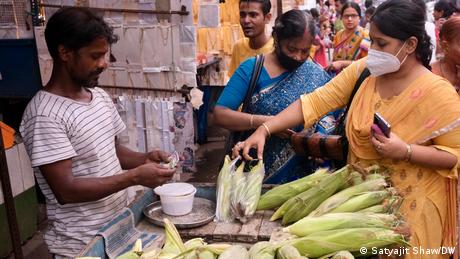 India banned some single-use plastics on Friday as part of a plan to phase out the material.

The country generates around 4 million tons of plastic waste each year, a third of which is not recycled and ends up in waterways and landfills.

The measure was first announced by Prime Minister Narendra Modi in 2018.

What do we know about the ban?

For the first phase, India has identified 19 plastic items that aren't very useful but have a high potential to become litter, such as plastic cups and straws. The ban makes it illegal to produce, import, stock, distribute or sell these items.

Some disposable plastic bags will also be phased out, while those below a certain thickness will for now be exempt from the ban.

The ban does not cover many other plastic products, including water bottles and chip packets, as well as products that have multi-layered packaging. Instead, the government has set targets for manufacturers to be responsible for recycling or disposing of the items.

Most plastic isn't recycled globally and millions of tons of the material pollute oceans and contaminate drinking water. In 2020, 4.1 million metric tons (4.5 million US tons) of plastic waste were generated in India alone, according to New Delhi's pollution watchdog.

Around half of India's states and territories have already sought to impose their own regulations on plastics. While the new federal law will be applied India-wide, its enforcement will be in the hands of states and municipal bodies.

Firms in the plastic industry argue that alternatives to the material are expensive, and have urged the government to delay the ban.

Satyarupa Shekhar, director of advocacy group Break Free from Plastic, said that the ban is "too little both in its scope as well as the coverage," given the magnitude of the waste crisis. Ravi Agarwal of campaign group Toxics Link welcomed the ban as a "good beginning," but stressed its success will depend on implementation.