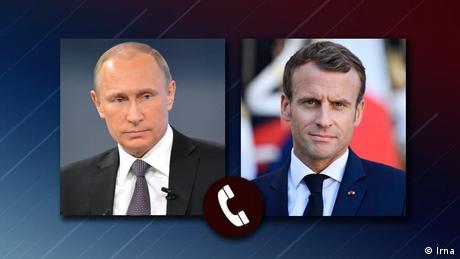 It's the morning of February 20, 2022, four days before Russia invades Ukraine. French President Emmanuel Macron, who has been spearheading western diplomatic efforts to dissuade Russia from sending in its troops massed on the border, is on a last-ditch telephone call with Vladimir Putin.

During the call, lasting one hour and 45 minutes, Macron's diplomatic aides are seen in another room of the Elysee — intently following the conversation on speaker phone, scribbling notes and sending direct messages to the president amid a charged atmosphere.

On first-name terms, the two leaders use the informal "you" form to address each other.

"Vladimir, I would like you to first give me your reading of the situation and perhaps quite directly, as is our habit, tell me what your intentions are," Macron tells Putin bluntly.

"What can I say? You yourself see what is happening," Putin retorts, accusing Ukraine of violating the Minsk accords negotiated in 2014 and 2015, which were meant to end the war with Russian-backed separatists in eastern Ukraine.

"Our dear colleague Mr Zelensky is doing nothing" to apply the Minsk accords, says Putin. "He is lying to you."

'The complexity of politics'

The footage of Macron's team following the sensitive exchange between Macron and Putin is a key sequence in the French documentary, "A President, Europe and War," by journalist Guy Lagache, who embedded himself with the Elysee for over five months.

Broadcast on French television at the end of June, Lagache initially set out to make a film about the workings of the European Union as France took over the presidency of the European Council in January. But he changed tack as the risk of conflict in Europe escalated.

"If there's a virtue of this film, especially at a time of populism" it is "to show … in this case, of course, through the war … how politics, the complexity of politics, functions," Lagache told a film preview in Paris last week.

The documentary offers a behind-the-scenes look at Macron's last-minute frenetic diplomacy, his frequent calls and meetings with Putin to stop him from going to war against Ukraine — an endeavor that ultimately proved fruitless.

While Macron has been praised for his diplomatic tenacity and for keeping open a channel to Putin, critics say he has been overconfident about his powers of persuasion and naive for thinking he had any influence over the Russian leader.

Facing an election in April, Macron's war diplomacy gave him an initial bump in the polls, while his opponents accused him of using the international stage to boost his chances of winning re-election.

"What interests me is knowing why he (Macron) continued to talk with Putin, when Putin lies, when his troops are guilty of war crimes. What is his political strategy when he repeats that Russia should not be humiliated?" Lagache asked a French radio station this week.

'I don't know where your legal advisor learned law'

At one point during the call on February 20 Macron raises his voice when Putin accuses him of seeking to revise the Minsk agreement. The Russian leader says the proposals of separatists in eastern Ukraine should be taken into account.

"I don't know where your lawyer learned law," Macron says, prompting titters from his aides, "to say that, in a sovereign country, legal texts are proposed by separatist groups and not by democratically elected authorities."

"They (The Ukrainian government) are not democratically elected," Putin retorts. "They came to power in a bloody coup. People were burned alive, it was a bloodbath. Zelensky is one of those responsible," adds the Russian president, referring to the burning of a building in Odessa in 2014 in which pro-Russian activists died).

Despite the tension, Macron also plays the role of mediator, saying to Putin: "You need to help me out a bit. The situation is very tense."

Macron says he will urge Zelensky to "calm everyone down," not just in the Ukrainian armed forces but also on social media. He calls on Putin to appeal for restraint among his troops massed on the border. "If you want to give dialogue a chance, you have to calm the region."

Finally Macron suggests to Putin a summit in Geneva with Biden. Putin agrees in principle, but says he will speak with his aides while insisting the meeting should be thoroughly prepared.

The head of the Elysee's diplomatic service, Emmanuel Bonne can be heard complaining that Putin "always lies."

At the end there's a bizarre moment when Putin signs off: "Thank you Emmanuel. I always enjoy talking with you because we have a relationship of trust."

"I don't want to hide anything from you, I wanted to go play ice hockey. Now I'm talking to you from the gym before I do my exercises,” the Russian leader says. "But I assure you: first I will call my aides."

'We were right to negotiate with Putin'

The summit with Biden never takes place. The next day, Putin raises the stakes by recognizing two breakaway "republics" in eastern Ukraine.

Macron gets on the phone with EU leaders, including an apparently skeptical Boris Johnson who tells Macron that with Putin "any time you try to negotiate with him, he does something more aggressive."

Macron responds with: "I think we were right to negotiate, because now he has the burden, and clearly the responsibility to do so."

As Russia launches a full-scale assault on Ukraine days later, the Elysee's diplomatic chief, Emmanuel Bonne tries reaching his Kremlin counterpart, Yuri Ushakov, on his mobile phone, but gets no answer.

"They have the nerve to wage war, but not the courage to speak," Bonne sighs.

Days after the Russian invasion, which prompts massive EU sanctions against Russia and a landmark U-turn in German defense policy, Macron speaks on the phone with Chancellor Olaf Scholz and asks the German leader about his discussion with Putin that morning.

"One aspect that impressed me more than all the talks was that he (Putin) never complained about all the sanctions," Scholz says in English. "He did not mention the question."

The goal is 'to help Ukraine win'

Apart from sensitive phone recordings — the Elysee confirmed to French newspaper Le Monde that Macron's advisors were informed a journalist would be following the French presidency of the Council of the European Union from the inside — the documentary has some memorable scenes.

They are filmed on the presidential jet; from inside the bunker under the Elysee; in one sequence a visibly tired Macron and his team are shown trudging through the snow in Moscow in the early hours after a marathon meeting with Putin before the outbreak of war.

In another, French and German diplomatic advisers chat informally about critical gas and oil supplies on the sidelines of an EU summit in Versailles.

Filmmaker Guy Lagache also manages to capture a slightly unreal sequence, where during Macron's visit to Kyiv a fortnight before the war, French diplomats wrest from Zelensky the memorandum of understanding for a contract worth a billion euros to enable French transport infrastructure giant Alstom to renovate Ukrainian railroads.

The documentary ends with Macron's long-awaited visit to Kyiv in June — the first since the outbreak of war — along with his German and Italian counterparts. On the train back, Macron insists he must continue to engage with Putin to prevent even worse outcomes, including wider war.

Distancing himself from what he calls "Anglo-Saxon" messaging that consists of saying "we must annihilate Russia, weaken it permanently," Macron says the goal is "to help Ukraine to win" and "not to fight against Russia, let alone annihilate it."