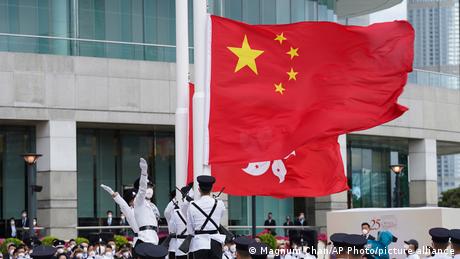 Beijing is in control of the political situation in Hong Kong. Since 2019, the pro-democracy movement, both on the streets and in the corridors of the legislative council, has been virtually eliminated.

Under a so-called national security law imposed in 2020, activists have been thrown in jail and independent media outlets like Apple Daily, and websites like Stand News and Citizen News have been shuttered.

The basis of Hong Kong's semi-autonomy, which had enshrined some civil liberties under the "one country, two systems" principle, has not yet been officially abolished, but in practice it plays an increasingly minor role.

On Friday, Chinese President Xi Jinping addressed the festivities, saying, "after the storms, Hong Kong has been reborn from the fire and emerged with robust vitality."

DW spoke with three Hong Kong residents about their feelings and experiences under Beijing's crackdown, and what they think about the future.

Stella, an artist, 33, has just visited a friend in prison. "There was a plexiglass screen between us. We were allowed to talk by intercom for 15 minutes." She asked him what he needed for everyday life in prison, she said.

Stella visits her friend every month. Over time, the topics of conversation have become fewer and fewer. Perhaps there is too little opportunity in prison to get information, she suspects. Her friend has now been moved to a solitary cell. Stella is worried about his physical and mental health.

Stella's friend was arrested in connection with the 2019 protest movement and is still awaiting trial. She spoke with DW using an encrypted messenger service. She was very careful with personal information so as not to endanger herself or her friend.

In 2019, Hong Kong was rocked by violent street protests prompted by a proposal for an extradition law, which would, among other things, allow the extradition of defendants to mainland China for trial in Beijing-controlled courts.

The anti-government protests were eventually crushed and many young participants arrested.

According to a report released in late May by the Washington-based Hong Kong Democracy Council (HKDC), the number of political prisoners in Hong Kong has risen sharply over the past four years.

According to the HKDC, 1,014 people are behind bars for various offenses, and the average sentence is 1.6 years. In addition to students, the detainees include people from a wide range of professions. More than half are younger than 25, and 15% of the detainees are minors, according to HKDC.

The HKDC report criticized the practice of keeping detainees in pre-trial detention for long periods of time without an actual trial progressing.

Stella's friend has already been imprisoned for more than a year, and the gathering of evidence for his trial is not yet complete. His trial has been postponed several times. "No one can say for sure" when it will finally start, Stella said.

A general climate of caution and fear of making political "mistakes" is noticeable everywhere, she added. Even her acquaintances in the artist scene prefer to avoid political topics.

Dorothy, 33, told DW she had a very uneasy feeling when thinking about the handover celebrations with national flags in the streets and speeches.

"Personally, I find it very disconcerting, a staging of stability and prosperity," she said. The past several years have been hard for Dorothy to bear. She discovered she was pregnant as the protests were raging three years ago and avoided attending demonstrations.

"I really should have been looking forward to a new life, but instead I was just scared," she said.

She was an eyewitness to the bloody incidents in subway stations where protesters and passersby were beaten up by unknown gangs.

Today, Dorothy's child is two and a half years old. She thinks about what her daughter will learn in school.

"School boards are bowing to the government and reinforcing so-called patriotic education," she said, adding that even kindergartens are encouraged by the authorities to regularly fly the People's Republic of China (PRC) national flag, sing the national anthem with the children, and recite patriotic slogans in Mandarin.

The mother fears that such "forced patriotism" will later lead to alienation between parents and children.

And Beijing's propaganda, coupled with resignation among activists, can be reflected in public attitudes reported in surveys.

According to a survey published in June by the Hong Kong Public Opinion Research Institute (HKPORI), Hong Kong residents still feel on average more strongly as "Hong Kong citizens" than as "PRC citizens." However, for the past two years, this has been on a downward trend.

A question of political priorities

Asked how he sees his identity as a citizen, a Hong Kong native who calls himself "Sesame" told DW he sees himself more as Chinese. He said he has friends who support and oppose the national security law.

He added people like him see their future in this market. But he also recognizes cultural differences and the brain drain of Hong Kong professionals as potential problems.

There is also a risk that other locations such as Singapore could replace Hong Kong as the international financial center in the region, he said.

However, he does not expect any significant changes in the short term under Hong Kong's incoming chief executive, John Lee, and has no opinion either way on the issue of the 25th anniversary of the return to China.

To stay or go?

Many Hong Kongers say they find it difficult to decide between staying and leaving. DW's three interview partners ultimately decided to stay.

Dorothy had repeatedly thought about emigrating because of her child's education. But she decided to stay in Hong Kong to take care of her parents.

In view of the many relatives and friends who have already left Hong Kong, Stella often thought about emigrating as well, but decided against it in the end. She said she tries to engage in dialogue with people from mainland China.

She wants her people to understand what is really happening in Hong Kong. Only in this way, she is convinced, is a meaningful exchange possible.