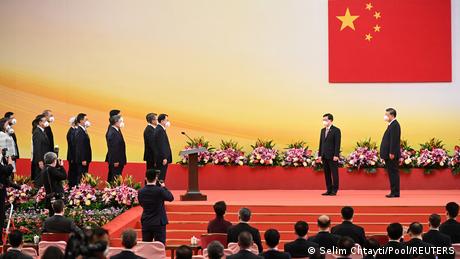 "After reuniting with the motherland, Hong Kong's people became the masters of their own city," Xi said at the inauguration of the city's new government. "Hong Kong's true democracy started from here."

Celebrations kicked off with a flag-raising event at Hong Kong’s Victoria Harbor. Incoming chief executive John Lee watched as helicopters flew over dangling the flags of China and Hong Kong. A flotilla sprayed plumes of water as soldiers hoisted both flags.

Xi did not attend this ceremony, local media reported, spending the night in the neighboring mainland city of Shenzhen. But he was back in the city for Lee's swearing-in.

Adding that there was no reason to change Hong Kong's "one country, two systems" formula of governance, Xi on Friday said it was successful under China's "comprehensive jurisdiction."

"For this kind of good system, there is no reason at all to change it. It must be maintained over the long term," he said.

Arriving in Hong Kong a day earlier by high-speed train, Xi said: "After the storms, Hong Kong has been reborn from the fire and emerged with robust vitality."

This was his first trip out of mainland China since the beginning of the COVID pandemic, and the first to Hong Kong since 2017, when he last took part in the July 1 celebrations.

Heightened security and no protests

Britain returned Hong Kong to Chinese rule on July 1, 1997. For years, the handover anniversary was marked with peaceful pro-democracy protests by tens of thousands of people. This year, however, authorities are clamping down to eliminate public opposition to China's rule over the financial hub.

Authorities deployed a massive security force across the city as its new leader,Lee, was sworn in to take over the position left open by Carrie Lam.

After taking the oath, Lee said the rule of law was a fundamental value for the global financial center, hailing a controversial national security law imposed via Beijing as the harbinger of stability for Hong Kong.

Lee, the city's former security chief, has been sanctioned by the United States over his role in implementing the 2020 national security law, which drastically redefined the definitions of criminal acts like "secession, subversion, terrorism, and collusion with foreign powers."

Critics of the Chinese government, including Western nations, accuse authorities of trampling on freedoms ensured under the "one country, two systems" formula that guaranteed wide-ranging autonomy and judicial independence for China.

A day earlier, UK Prime Minister Boris Johnson said Britain was "not giving up on Hong Kong," accusing Beijing of failing to keep its promises: "It's a state of affairs that threatens both the rights and freedoms of Hongkongers and the continued progress and prosperity of their home."

US Secretary of State Antony Blinken expressed Washington's solidarity with the people of Hong Kong as they experience what he referred to as an "erosion of autonomy" under Chinese rule.

"It is now evident that Hong Kong and Beijing authorities no longer view democratic participation, fundamental freedoms, and an independent media," Blinken said in a statement, calling for people's personal freedoms to be restored.