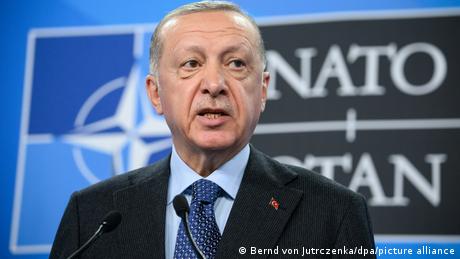 As the NATO summit drew to a close on Thursday, Turkish President Recep Tayyip Erdogan warned that Sweden and Finland's accession to NATO could still be blocked if the countries did not fulfill their end of a bargain with Ankara to extradite wanted individuals deemed by Turkey to be "terrorists."

Erdogan said Sweden had promised to extradite 73 people with alleged links to the Kurdistan Workers' Party (PKK) and the US-based cleric Fethullah Gulen, who Erdogan holds responsible for orchestrating the 2016 coup attempt.

Erdogan: 'Sweden and Finland must fulfill their duties'

At the close of the summit in Madrid, Erdogan spoke about a 10-point memorandum signed with Finland and Sweden as a diplomatic victory that he saw as recognition of Ankara's concerns surrounding terrorist threats.

Erdogan said if the Nordic states backtracked on the deal, then Turkey's parliament would still be in a position not to ratify the agreement.

"This business will not work if we don't pass this in our parliament,” Erdogan said. "First, Sweden and Finland must fulfill their duties and those are already in the text... But if they don't fulfill these, then of course, there is no way we would send it to our parliament.''

In May, Erdogan told the leaders of Sweden and Finland that he would block their bid to join NATO unless they halt what he considers their support for "terror" groups threatening Turkey's national security.

Sweden has moved to allay fears that the deal would result in extraditions without following what is prescribed by its laws.

"In Sweden, Swedish law is applied by independent courts. Swedish citizens are not extradited. Non-Swedish citizens can be extradited at the request of other countries, but only if it is compatible with Swedish law and the European Convention," Justice Minister Morgan Johannsson said Thursday in a statement to the AFP news agency.

Finnish President Sauli Niinisto stressed that Helsinki would also be guided by the rule of law when it comes to extraditions.

"In the case of extraditions, we will adhere to our own legislation and international agreements. Ultimately, extradition is a legal discretion which politicians have no right to influence," Niinisto said.

On Wednesday, NATO chief Jens Stoltenberg identified Russia as presenting the most "serious security crisis" in decades for NATO members and the "biggest challenge" the alliance has faced in its history.

The alliance unveiled a revamp of its security strategy that would involve dramatically increasing troop numbers in a state of readiness.

Finland and Sweden's requests to join NATO and the organization's invitation to the two countries marked a significant shift in European security, with the pair of Nordic nations parting ways with decades of neutrality.

However, membership has hinged on consensus from Turkey, which is the alliance's second-largest troop contributor. Urgent talks had to be held with leaders of the three countries after Turkey threatened to sink the accession bid.

Stoltenberg expressed confidence that Finland and Sweden would become full NATO members and expects the process to be completed "rather quickly," although no time frame has been set.