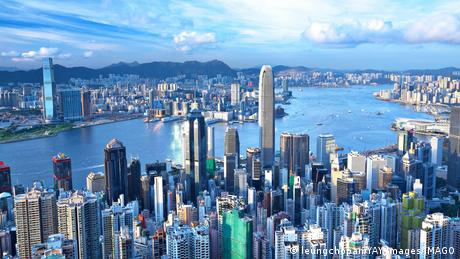 Many Hong Kong residents these days may not feel like celebrating at all when the 25th anniversary of the city's return to Chinese rule is marked. This is due on the one hand to the efforts of the Chinese government to expand its influence in Hong Kong and to suppress the democracy movement, an effort that has been increasing for years. On the other hand, the COVID-19 pandemic has hit the city hard and brought one of the pillars of its economy, tourism, to a virtual standstill.

"Until 2019, Hong Kong was one of the world's most-visited cities," says Wolfgang Ehmann of the German Chamber of Commerce in Hong Kong. However, due to strict pandemic travel restrictions, some of which are still in force, the sector collapsed completely.

In all of 2021, the official number of visitor arrivals was just 91,000, Ehmann said — compared with nearly 56 million in 2019. "This shows how devastating the consequences of the zero-COVID policy have been, and continue to be, for tourism in Hong Kong."

On Hong Kong's streets, the large number of lowered shutters, and closed stores and restaurants in the shopping centers, are proof of how badly the economy has been hit by the absence of visitors.

According to official figures, tourism makes up circa 5% of the city's gross domestic product. There are more than 300 hotels, and the sector directly employs some 260,000 people.

Most tourists from mainland China

The tourism industry has changed greatly over past decades. "Shopping tourism is very important in Hong Kong today," says Jianli Chen, owner of the Hamburg-based company China Hansa Travel, which organizes trips to his home country. "Chinese tourists from the mainland now play a much bigger role than international tourism."

Official figures bear this out. In 2017, for example, 76% of all visitors came from mainland China. Expensive watches, fancy bags, branded goods of all kinds — that's what wealthy mainland Chinese are looking for in Hong Kong, Chen explains.

The fact that such shopping trips — often only day trips — are possible is a direct result of the city's rule being returned to China. Starting in 2003, the Chinese state began issuing visas that allow individual trips to Hong Kong. Since then, almost 300 million Chinese have made use of them.

Hans-Wilm Schütte, a Chinese scholar and author of several travel guides on China and Hong Kong, remembers times when this was not possible. "Tourists in Hong Kong used to be Americans, Japanese, occasionally a few Europeans," he says. "The fact that so many mainland Chinese come today also has to do with [Hong Kong's] handover to the People's Republic of China."

That handover officially concluded on July 1, 1997, after many years of wrangling. After the so-called Opium War in 1841, rule of Hong Kong was in the hands of the United Kingdom. The city subsequently developed into an important military base and trading center. During World War II, Japanese forces occupied the city, and afterward Hong Kong grew into an economic powerhouse, thanks in part to Chinese entrepreneurs who had fled Mao's Red Brigades.

But Hong Kong's autonomy is being increasingly eroded. In 2020, a controversial "security law" came into force that gave the Chinese government leeway to supress free speech and democracy protests there, and which continues to serve as the basis for arrests of regime critics.

In 2014, tens of thousands of people took to the streets in so-called "umbrella protests" to demand more democracy. Also in 2019 and 2020, the city saw a series of pro-democracy demonstrations.

Although the demonstrations were largely peaceful, Chen believes this has impacted tourism — he's convinced that many tour operators simply take Hong Kong off their itineraries when there is any kind of unrest there.

The city had long been the gateway to China for Western travelers; hovever, this has changed.

"Hong Kong tourism from Europe has become much less," says Chen. As recently as the 1990s, he used to average three trips a year to Hong Kong as a tour guide.

"The classic route for round trips to China began and ended in Hong Kong," says Chen. However, with the progressive opening up of China, this has gradually changed.

Meanwhile, recovery of the tourism industry is still not in sight. Hong Kong travelers continue to be subjected to strict COVID-19 restrictions that include multiple tests and long hotel quarantines.

Celebrations to mark the 25th anniversary of the return of the city are, however, likely to be lavish. China's President Xi Jinping will also be present, and is expected to attend several official events.