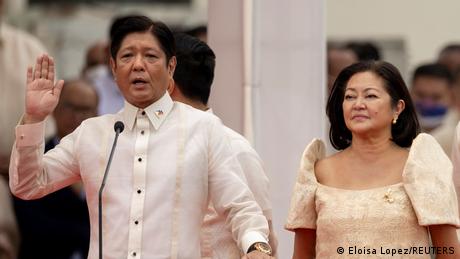 A series of arrests and crackdowns on media outlets in the weeks before the presidential inauguration of Ferdinand Marcos Jr. on Thursday foreshadows a continued climate of intolerance for dissent and shrinking civil liberties in the Philippines, warn activists and human rights defenders.

On Wednesday, the country's Securities and Exchange Commission (SEC) upheld its 2018 ruling to shut down Rappler, the news organization founded by Nobel laureate Maria Ressa in 2012.

The SEC said the outlet violated "constitutional and statutory restrictions on foreign ownership in mass media."

In an online briefing, Ressa said that Rappler would appeal the SEC decision and that its journalists would continue reporting. "We have plans A to Z…we are not going to voluntarily give up our rights."

Ressa is fighting at least seven court cases, including an appeal against a conviction in a cyber libel case, for which she is out on bail and faces up to six years in prison. Rappler faces about eight cases, Ressa said.

But it's not the only media outlet that has been caught in the government's crosshairs.

Misuse of anti-terror laws to go after media?

Earlier this month, the National Security Council ordered internet service providers to shut down a list of websites "found to be affiliated to and are supporting terrorists and terrorist organizations."

Websites affected by the ruling included independent media outlets such as Bulatlat and Pinoy Weekly.

"The recent order to block websites shows how easily the government can silence dissent and critical reporting under the cover of enforcing laws and regulations," Jonathan de Santos, chairperson of the National Union of Journalists of the Philippines, told DW.

"The timing of it, just days before President Rodrigo Duterte stepped down, makes this look like a last hurrah for an administration that has been hostile to the press," he added. "The press under Marcos Jr. will likely see the same hostility as we saw under Duterte, if not worse."

The website of Amihan National Federation of Peasant Women, a labor rights group that has been on the receiving end of relentless acts of political intimidation, has also been blocked.

Amihan said that its website focuses on issues and demands of peasant women and the agriculture sector.

"The new administration is already showing its disregard for human rights and press freedom. They continue to bend laws to serve their benefit," Zenaida Soriano, the rights group's chairperson, told DW.

Soriano said Amihan's bank accounts have also been frozen since last year due to alleged violations of terrorism financing rules.

"You cannot expect anything good from a Marcos, Jr. and Duterte tandem. They are using the anti-terrorism law against citizens who are standing up to defend their rights and their livelihoods. This is the same legacy of their fathers," said Soriano.

Marcos Jr., the son and namesake of the former Philippine dictator, was sworn in as president on Thursday after his landslide victory in the recent election.

His running mate — Sara Duterte, the daughter of his predecessor Duterte — was sworn in as vice president earlier this month.

Both of them have so far failed to acknowledge the human rights atrocities that took place under their fathers.

Various media organizations have documented how Marcos Jr.'s victory was aided by a massive disinformation campaign.

Critics say both the Marcos and Duterte families have excelled at exploiting and manipulating social media to create an alternative information ecosystem with wide reach.

Regine Cabato, Manila correspondent for the Washington Post and a member of the Foreign Correspondents' Association of the Philippines, told DW that the disinformation campaign of Marcos Jr. ran for decades and was "elaborate, moneyed, and spans different social media platforms, capturing different sectors."

"In some ways, outgoing president Duterte's administration saw some institutionalization of disinformation: granting propagandists positions in government, the charges against the traditional press, and so on," Cabato said.

"But what Duterte developed in 2016, Marcos Jr.'s team has almost perfected. His campaign is slicker and quicker than Duterte's was, with TikTok influencers and YouTube videos seeded for years. It's a rabbit hole and alternative universe of disinformation," he added.

Philippines facing a number of challenges

Marcos Jr, 64, has so far not presented many details about his policies, but is expected to carry ahead the same approach as his predecessor Duterte, pursuing a ruthless consolidation of power.

The Philippines, meanwhile, has been among the countries worst-hit in Asia by the COVID pandemic, with over 60,000 deaths, a deep economic recession, worsening poverty and joblessness.

The Russian war in Ukraine, which has caused global food and energy shortages as well as soaring inflation, has compounded the challenges.

Against this backdrop, it's not clear how the new administration will tackle the problems.

"It's hard to predict how a Marcos presidency will affect the economy because to date he still has not come up with a comprehensive or strategic plan," Jan Carlo Punongbayan, an analyst and professor of economics at the University of the Philippines.

"Right now, the country's debt-to-GDP ratio is in excess of 60%. Some analysts say we can grow our way out of current debt, but with the domestic economy still in a precarious situation and the global economy heading towards a recession, growing our way out of debt could still be difficult to achieve," Punongbayan said.