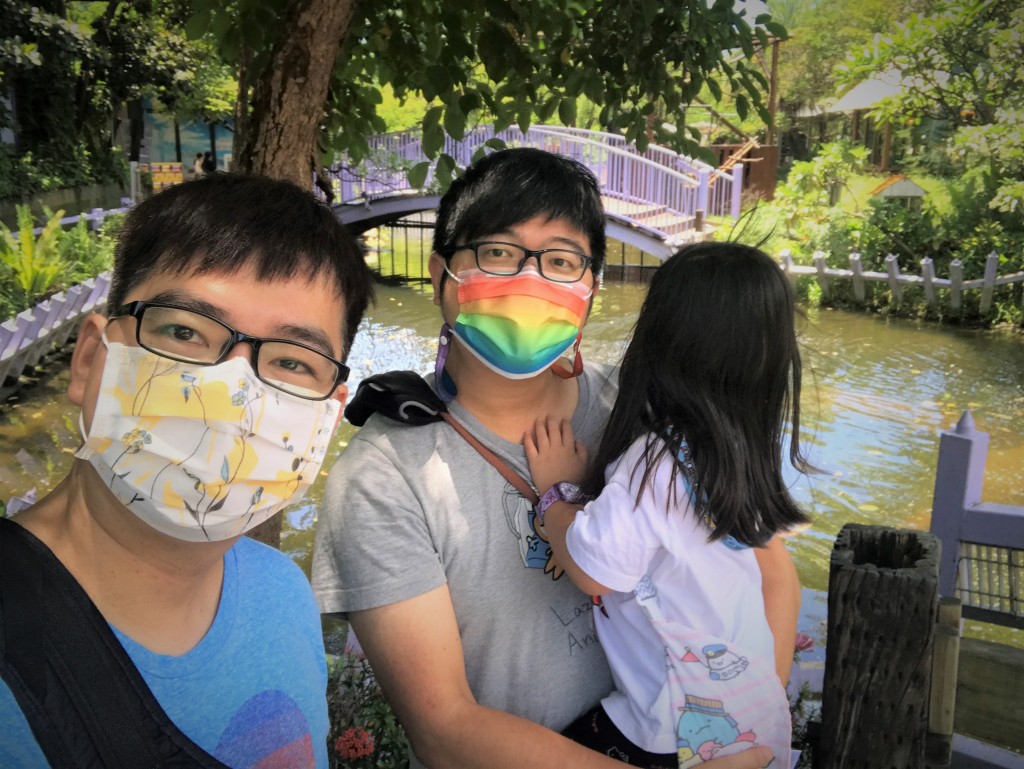 TAIPEI (Taiwan News) — On the identity card of Wang Chen-Wei (王振圍) and Chen Chun-Ju's (陳俊儒) daughter, Hope, it confirms that she legally has two fathers. It has been a long road to this point since Wang adopted the girl in 2019 and later married his same-sex partner, Chen.

Wang, better known as Wei Ba (圍爸), and Chen (aka Miao Ba, 喵爸) have begun to take joint custody of Hope, who is not biologically related to either of them, since January. This followed a ruling by Taiwan Kaohsiung Juvenile and Family Court on January 13, 2022 — which was the first ruling of its kind not only in Taiwan, but also in Asia.

Same-sex couples in Japan and South Korea are not so lucky. District courts in Japan have been debating whether same-sex marriages contravene the country's constitution. Meanwhile, South Korea's highest court in April finally overturned a military court ruling that said consensual sex between two off-duty gay soldiers should no longer be criminalized.

Taiwan was the first country in Asia to sign into law same-sex marriage. It is now moving from marriage equality to child custody equality and seeking an amendment to extend adoption rights to every same-sex family.

Adoption: For and against

Every year, Taiwan has over 1,000 children who need to be settled, and most of them are aged under 6 years old, according to the Ministry of Health and Welfare. Placement institutes, foster and adoptive families used to be the primary receivers of children without a home, but their numbers have dropped since the COVID-19 outbreak in 2020.

Some human rights activists believe a child's chances of finding a new home could be improved if legal hurdles and red tape could be removed for same-sex families who strongly desire to adopt a child. As such, the Kaohsiung court decision in January was made not only out of consideration for the rights of same-sex people, but also the child, with the court ruling it would serve their best interests.

Andrew Chung (張守一), secretary general of the Family Guardian Coalition, a prominent opponent of same-sex marriage in Taiwan, expressed concern the socio-emotional development of children raised by same-sex parents would be affected. This, he claimed, could lead to identity confusion, poor interactions with their peers, and possibly feelings of gender inferiority or non-belonging.

Scientists, however, have a different view. Chung Yin-kun (張盈堃), a professor from NCCU Graduate Institute of Early Childhood Education, said people should consider the best interests of the child rather than the best interests of adults. The most important thing for a child's happiness, Chung said, was a stable environment full of love.

"I can see that Hope has an attachment to this family," said Chung. As for not having a role model, Chung suggested picture books and reading could help bridge the gap. There are many such books in Europe that talk about same-sex families and identity issues, Chung added.

In Taiwan, same-sex couples getting married follow the rules provided in the Same-Sex Marriage Law (Act No.748), which is different from heterosexual couples following the Civil Code. This means that same-sex married couples can only adopt children who are biologically related to them. As such, many same-sex couples have to choose between getting married and having a child, if they want to adopt a non-biological child.

"It really took us a long way to get here (a court ruling of joint custody), but there are still many same-sex families who can't even adopt a child," said Chen. There are three cases of same-sex adoption, two from Kaohsiung and one from Changhua.

However, only Wang and Chen had their day in court and successfully applied for permission to adopt a non-biological child. The other two cases were rejected. "We hope Taiwan can amend the laws and give a green light," Chen said.

Legal amendments for same-sex adoption are being pursued in the Legislative Yuan, but it needs time to discuss the matter properly, said Legislator Chih-Wei Ho (何志偉). Furthermore, there will be a need for additional budgets to address the challenges of adoption, from household registration to healthcare for the child.

Wang Chun-ling (王郡羚), manager of Child Welfare League, offered this advice to same-sex couples considering adoption. "In addition to the legal huddles, same-sex couples must realize they have to 'come out' if they adopt a child, and deal with various challenges coming after, such as the unwanted attention surrounding their family, proactively informing the school of their situation, facing endless questions from the child, and dealing with their emotions as they grow up," she said.

"They need to recognize the headwinds coming in the future, have courage to face their fears, and work them out."

Despite the challenges ahead, an Executive Yuan survey indicates a positive trend. Over 70% of people are okay with same-sex adoption, which is an improved approval rating from last year, said Ho. "It gives me some confidence to speak up."

To those same-sex couples who are hesitant, Wang and Chen encouraged them to take action. "Don't deny it or doubt yourself. Just hang on in there, either in your relationship or your job."

The draft amendment that intends to make same-sex adoption the same as heterosexual cases passed its preliminary review in the Legislative Yuan on May 12. The draft is expected to undergo cross-party negotiations soon this year.