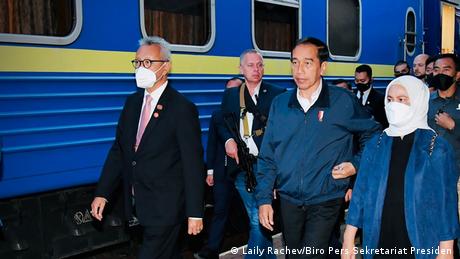 Indonesian President Joko Widodo, better known as Jokowi, arrived in Kyiv on Wednesday to hold talks with Ukrainian President Volodymyr Zelenskyy, becoming the first Asian leader to visit the country since Russian launched its invasion at the end of February.

"The eleven-hour train journey from the Polish city of Przemysl to the Ukrainian capital was smooth. We arrived at Platform 1 of Kyiv Central Station, around 8:50 local time, to be greeted by several Ukrainian officials," Jokowi tweeted.

Jokowi went straight to the rubble of an apartment complex in Irpin — a city near Kyiv that experienced massive destruction during the early days of the Russian invasion — before meeting with Zelenskyy, his office said. He was scheduled to return to Poland by the same train later in the day.

Teuku Faizasyah, a spokesperson for Indonesia's Foreign Ministry, told DW that Jokowi would meet Putin on Thursday, but refused to divulge any details regarding the meeting's agenda.

"We understand that the current situation is still very, very complicated. The world also understands the complexity of the problem at hand," the ministry said in a statement.

Mitigating the impact of war

Jokowi's Ukraine and Russia trips are taking place after he attended the G7 summit in the Bavarian Alps as a guest.

Before leaving Jakarta to attend the gathering in Germany, Jokowi stressed the need to stop the Russia-Ukraine war and tackle the food and energy crises it caused worldwide, particularly in low-income and developing countries.

According to a report published by the World Food Program in June, some 345 million people in 82 countries are facing acute food insecurity due to the skyrocketing prices of food, fuel and fertilizer.

Before the war, Ukraine had also been one of Indonesia's biggest wheat suppliers.

Indonesians, by and large, appear to support Jokowi's initiative to meet the two leaders. Many even expect him to step into the role of mediator.

Hikmahanto Juwana, a professor of international law at the University of Indonesia, told DW there is "a huge expectation" in the Southeast Asian country that Jokowi will mediate and bring peace between Russia and Ukraine.

But he considers these hopes of success exaggerated, given the complexity of the war.

Lina Alexandra, a senior researcher at the Department of International Relations of the Jakarta-based think tank Center for Strategic and International Studies (CSIS), echoes a similar view.

Jokowi's primary goal will be to mitigate the impact of the war on the rest of the world, rather than ending the conflict altogether, she told DW, noting: "We know that most political conflicts cannot be resolved quickly."

"It is more realistic to see the leaders discussing issues regarding unblocking access to food, fertilizer and energy," Alexandra said.

"Many countries in our region are feeling the impact of the war. There is no wheat, no fertilizer, no seeds. I think this will become Jokowi's priority when visiting Ukraine and Russia."

Jokowi, who is serving his second and final term, has recently taken a more active role in foreign affairs. Indonesia is also holding the G20's rotating presidency this year and as chair, Jokowi will host the grouping's summit in Bali in November.

But some Western nations have threatened to boycott the gathering if Putin attends.

To defuse some of the tension, Jakarta has also invited Ukraine to join the summit although it is not a member of the G20.

Meanwhile, the Indonesian president is one of six world leaders the United Nations appointed as "champions" of a Global Crisis Response Group (GCRG) formed to address the threat of an "unprecedented wave of hunger and destitution" resulting from the war in Ukraine.

Despite Indonesia enjoying good relations with both Ukraine and Russia, Jokowi's chances of finding common ground between Zelenskyy and Putin remain limited, said Alexandra, who is also an expert in international peacekeeping, human rights and conflict resolution.

'In the end it all depends on Putin'

Hikmahanto Juwana, however, underlined that with enough cajoling and a right approach, Putin could be persuaded to agree to a cease-fire.

"In my opinion, both Russia and Ukraine are already tired of war, especially Moscow which started the aggression. A lot of money has been spent, many soldiers have died," he said.

Despite Moscow's enormous losses — in blood and treasure — Putin will not declare an abrupt end to the war by himself, the expert stressed, adding that such a move will require a third party to approach and persuade him.

But Alexandra remains skeptical. "In the end it all depends on Putin," she said, adding that all one can do is to convey the message to him that conflicts and hostilities are not good for anyone and that they will put the entire world in peril.