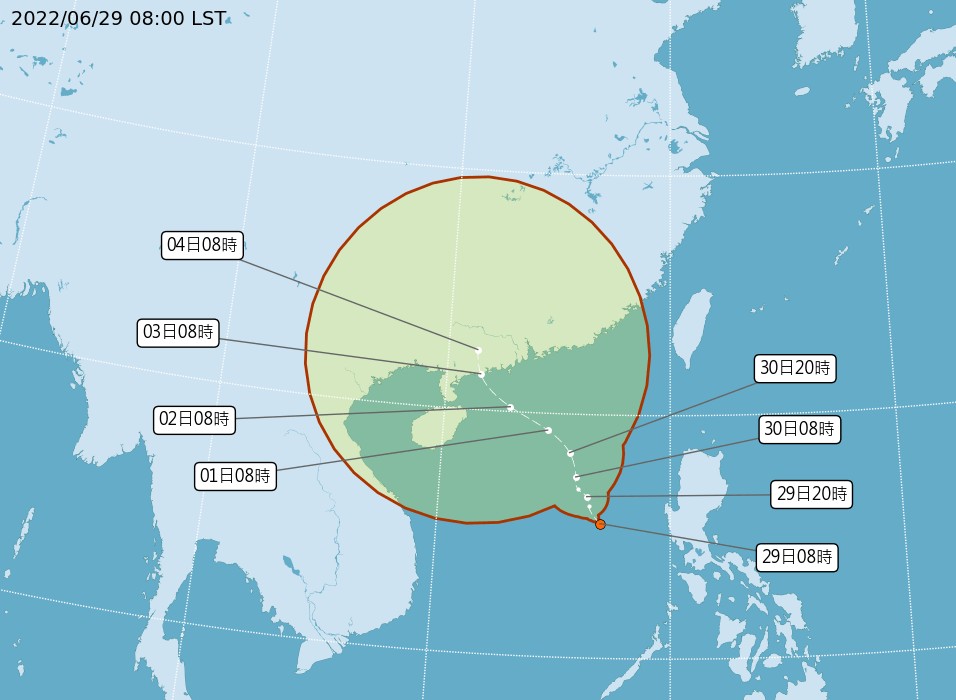 TAIPEI (Taiwan News) — A tropical depression brewing to the northwest of the Philippines could intensify within 24 hours into Tropical Storm Chaba (芙蓉), the third tropical storm of the year, with its periphery bringing unstable weather to Taiwan.

The Central Weather Bureau (CWB) issued a notice Wednesday morning (June 29) announcing the formation of Tropical Depression TD04. As of 8 a.m., the center of the cyclone was situated 15.5 degrees north latitude and 117.0 degrees east longitude, moving northwest at a speed of 16 kilometers per hour (kph).

The storm is packing wind speeds of 54 kph and gusts of up to 82 kph. CWB forecaster Chao Hung (趙竑) told CNA that the tropical depression is currently expected to head north-northwest, before turning west-northwest toward Hainan and Hong Kong.

Chao said it is possible that the TD04 could be upgraded to Tropical Storm Chaba within the next 24 hours, making it the third tropical storm of the year. He said that because the cyclone's path is not suitable for it to continue to strengthen, it will probably remain a moderate tropical storm.

The weather forecaster predicted that the tropical storm would not have a direct impact on Taiwan. However, he said Taiwan will likely be affected by the periphery of the storm starting on Friday (July 1), bringing unstable, wet weather to the country.