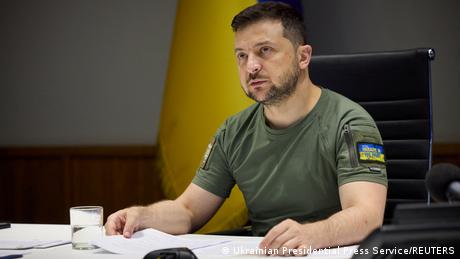 This article was last updated at 00:55 UTC/GMT

Ukrainian President Volodymyr Zelenskyy addressed all members of the United Nations Security Council via video link on Tuesday night, calling for the UN to investigate the site of Russia's deadly airstrike on a shopping mall in Kremenchuk.

"I suggest the United Nations send either a special representative, or the secretary-general of the United Nations ... so the UN could independently find out information and see that this indeed was a Russian missile strike," he said.

Zelenskyy asked all 15 members of the Security Council — including Russia — to observe a minute's silence for the victims of the attack.

He also called for Russia to be expelled from the group (a move which Russia has the right to veto) and for the UN to legally define the term "terrorist state" in order to prosecute Moscow and President Vladimir Putin.

"Putin has become a terrorist," he said. "Daily terrorist acts, without weekends. Every day they are working as terrorists," he told the Council.

Russia's deputy ambassador to the UN Dmitry Polyanskiy hit back, saying the Security Council "should not be turned into a platform for a remote PR campaign for President Zelenskyy in order to get more weapons" from NATO countries.

What happened in Russia's war in Ukraine on Tuesday

At the NATO summit in Madrid, the defense ministers of Germany and the Netherlands promised to send a further six Howitzer 2000 weapons to Ukraine in its struggle to fend off invading Russian forces, in addition to the 12 howitzers they already delivered.

Turkey also backed down from its threat to veto Finland and Sweden's NATO membership bids after reaching an agreement with the Nordic countries at the summit.

Meanwhile, the G7 countries pledged to support Ukraine for "as long as necessary." The key agreement was to implement a price cap on Russian oil to make the war financially unviable.

The death toll from the Russian airstrike on a shopping mall in Kremenchuk also climbed to 16. The Russian Defense Ministry claimed it had targeted a nearby ammunition depot but Volodymyr Zelenskyy said the mall had "no strategic value."

Click here to catch up on Tuesday's developments on Russia's war in Ukraine.