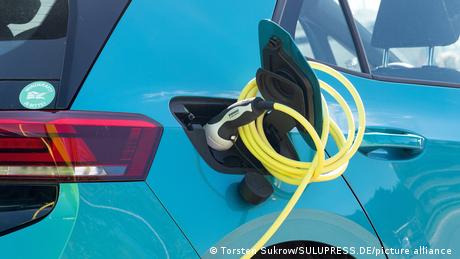 The environment ministers from the European Union's 27-member states struck a deal to approve a raft of measures to combat climate change in the early hours of Wednesday morning.

The agreement came after over 16 hours of negotiations in Luxembourg over proposed climate laws — and included a compromise on phasing out new fossil fuel car sales as of 2035.

"The Council also agreed to introduce a 100% CO2 emissions reduction target by 2035 for new cars and vans," the minsters said in a statement.

The agreement effectively means that no new cars with internal combustion engines will be allowed to be sold in the bloc starting from 2035.

A final compromise must now be negotiated with the European Parliament — which also supports a complete ban on the sale of combustion engine vehicles as of 2035.

With the EU seeking to become climate neutral by 2050, the combustion engine ban and the rest of the draft bills must come into effect to curb emissions.

Ministers agreed joint positions on five laws that were proposed last year by the European Commission.

"The climate crisis and its consequences are clear, and so policy is unavoidable," EU climate policy chief Frans Timmermans said.

Germany backs phase-out, but with a tweak

The EU ministers' statement came after Germany's coalition government backed the phaseout, but on the condition that the sales of new cars running on "CO2 neutral" fuels will still go ahead after 2035.

The debate over a potential combustion engine ban has been met with resistance particularly in Germany, the biggest car market in the bloc.

"EU member states have voted with an overwhelming majority that starting from 2035, only cars and light commercial vehicles will be permitted that do not emit CO2," German Environment Minister Steffi Lemke said.

"This sends a clear signal that we must achieve the climate targets. They also give the auto industry the planning security that it needs," she added.

Social climate fund on the horizon

Another aspect of the agreement will see a Social Climate Fund established to combat energy poverty as Europe moves away from fossil fuels.

The €59 billion ($62 billion) fund is intended to shield low-income citizens from any increase in energy costs caused by climate policy.

All EU member countries will be able to submit proposals to the European Commission for how these money can be spent to help people, such as by making homes more energy efficient or subsidising zero-emissions transport.

"The transition to renewable energy will bring the bills down, but many people will need some support in getting there," Timmermans added.