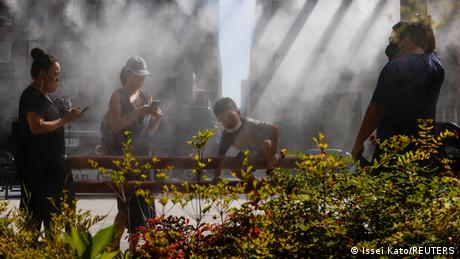 Japan experienced its fourth successive day of a heat wave on Tuesday, with citizens cranking up air conditioners for relief.

Authorities warned that the increased power consumption could lead to energy cuts.

Tokyo has been particularly hard hit by the temperature surge. A high of 36 degrees Celsius (96.8 degrees Fahrenheit) was predicted on Tuesday after three consecutive days of record-topping heat.

Authorities initially requested that Tokyo residents reduce power consumption to avoid power cuts. But officials rolled back their power saving ambitions after the sweltering heat proved deadly for some.

Cases of hospitalization due to heatstroke in Tokyo rose to 76 on Tuesday, according to emergency services. At least two people have also died from the heat.

"Apparently there are some elderly people who have turned off their air conditioners because we are asking people to save energy, but please — it's this hot — don't hesitate about cooling off," Trade and Industry Minister Koichi Hagiuda said at a news conference.

Tokyo may experience blackouts despite measures

Japan's government will still have to contend with dwindling energy stores. The government warned on Tuesday that capacity needed for energy reserves could reach minimum levels in Tokyo and eight surrounding prefectures. Residents may experience blackouts if reserve capacity hits its lower threshold.

In 2018, Japan experienced a similar spate of heatwaves. Tokyo, at the time, registered temperatures over 40 degrees Celsius for the first time on record and declared the temperature surge a "natural disaster."