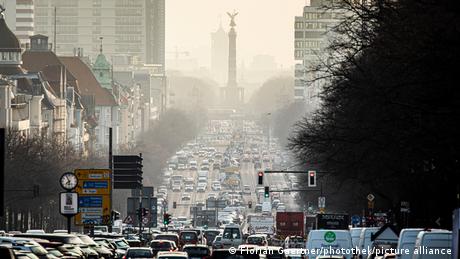 Germany will only back the package if an option is added that permits sales of cars running on "CO2 neutral" fuels, German Environment Minister Steffi Lemke said on Tuesday.

"This addition is important to Germany in terms of our position, we believe it can also be a bridge for the overall discussion," Lemke said at a meeting of EU environment ministers on Tuesday.

If approved, the bill will ban sales of all fuel emitting cars from 2035 onward. But Germany wants an added clause that makes an exception for carbon neutral vehicles.

Environment ministers from the 27 EU member countries are meeting on Tuesday to form an agreement on laws to fight climate change. A car emissions proposal tops the agenda. However, EU countries are divided over how ambitious the ban should be.

Where do other EU countries stand on the proposal?

Italy, Portugal, Slovakia, Bulgaria and Romania have requested the EU delay the phaseout.

"2035 for Poland is not possible to accept, but I know that there are many countries which will raise this issue today," said the country's Climate Minister Anna Moskwa.

An unnamed Bulgarian official also said climate policies needed to consider economic and social factors such as the "the significant differences" in purchasing power between EU countries.

Brussels has warned that delaying the ban could prevent the EU from reaching its net zero target by 2050 — a goal that scientists say could help curtail climate change.

"The decision on cars will show how serious European governments are about their climate promises," said Julia Poliscanova from the campaign group Transport and Environment.

A phaseout of combustion engines is part of a larger proposed climate package. The bundle of laws is designed to help the EU tackle its goal to reduce carbon emissions to 55% of 1990 levels by 2030.

Once EU ministers agree on draft laws, they will negotiate with the EU Parliament on the final bill. Failure to agree on a combustion car deal could delay other proposals.

The French minister for the energy transition, said that the outcome of Tuesday's talks could put the EU's "credibility at stake.”