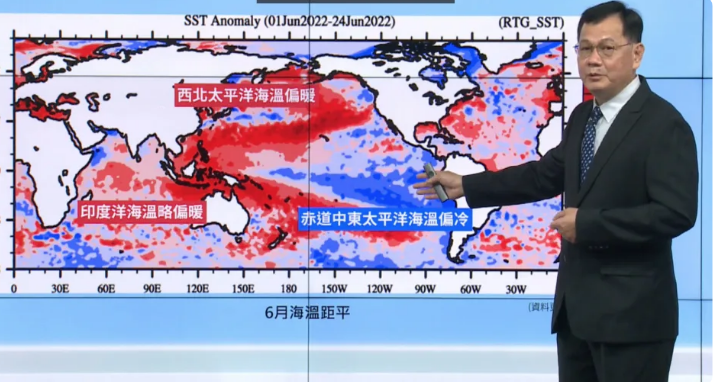 Rainfall and temperatures should be around average, too. La Nina and El Nino represent the cooling and warming phases of a cycle of weather patterns in the east-central equatorial Pacific that change over the years.

CWB Weather Forecast Center Director Lu Kuo-chen (呂國臣) said the influence of La Nina will likely be weak this summer. The effects, however, could be more pronounced in autumn and winter.

So far this year, just two typhoons have been generated in the northwest Pacific Ocean — less than the average of 4.3. Usually there are about 20 to 25 typhoons from June to December, of which three or four hit Taiwan.

This corresponds to climate prediction models elsewhere suggesting trade winds will slow in the coming weeks and weaken cool sea surface temperature anomalies, per the National Oceanic and Atmospheric Administration’s Climate.gov website. Again, the expectation is for a weaker La Nina effect over the summer that strengthens in the fall.

Lu Kuo-chen said the plum rains this year from mid-May led to “significantly below-normal average temperatures” and “above normal rainfall” — though this has normalized.