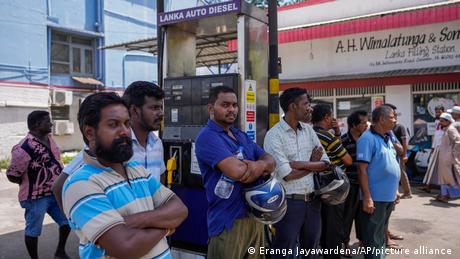 The Sri Lankan government will ration the supply of fuel to essential services such as transport, health and food deliveries for two weeks from Tuesday, it announced on Monday.

"From midnight today, no fuel will be sold except for essential services like the health sector, because we want to conserve the little reserves we have," government spokesman Bandula Gunawardana said.

The island nation is suffering from its worst economic crisis since it gained independence in 1948, which has left its 22-million-strong population struggling to pay for food, medicine and fuel.

As a result of the rationing, schools will remain closed for two weeks and people have been urged to work from home where possible.

"Sri Lanka has never faced such a severe economic crisis in its history," Gunewardena said.

Regulators said on Monday that the state-run Ceylon Electricity Board (CEB) had asked to increase its prices by 835% for heavily subsidized consumers after losing 65 billion rupees ($185 million, €171 million) in the first quarter.

"A majority of the domestic consumers will not be able to afford this type of steep increase," Public Utilities Commission of Sri Lanka (PUCSL) chairman Janaka Ratnayake told reporters in Colombo. "Hence we proposed a direct subsidy from the Treasury to keep the increase to less than half of what they have asked."

The government has also sent two ministers to Russia to negotiate directly purchasing Russian fuel in the wake of the massive shortages.

"There is an advantage for us if we could buy oil directly from the Russian government or the Russian firms. There are talks going on," Power and Energy Minister Kanchana Wijesekera said on Sunday.

The crisis has hit the population hard, with record levels of inflation driving up prices and fuel shortages already having triggered rolling blackouts.

Protesters calling for the resignation of President Gotabaya Rajapaksa have been met with brutal crackdowns as well as several political offers of compromise such as removing several of Rajapaksa's family members from positions of power.

The United Nations launched an emergency response earlier in the month to feed pregnant women while reporting that four out of five people in the country were skipping meals and warning of a "dire humanitarian crisis."

Sri Lanka has been in talks with the International Monetary Fund for a financial bailout after defaulting on its $51 billion foreign debt in April.