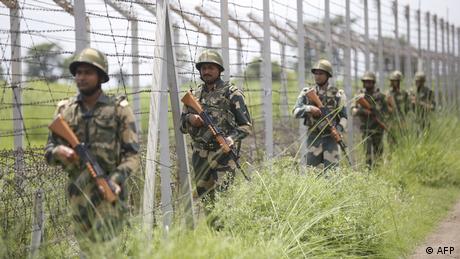 Last November, Abdul Samad, a ninth-grade student from Pakistan-administered Kashmir, accidentally crossed the de facto border between Pakistan and India and was apprehended by Indian authorities, his family says.

Since then he has been detained by the Indian side. Police have filed a case against him for illegally entering India-administered Kashmir.

His family, which hails from the village of Tatrinote, located near the frontier, says the 14-year-old crossed the border while trying to catch his pigeons, which he had set free that day.

"He was trying to catch his pigeons without knowing that he strayed into India. He was immediately arrested by the Indian border force on suspicion," Arbab Ali, his maternal uncle, told DW. "We came to know in the evening that day that Samad had been arrested," Ali said.

The family says they are yet to hear from him or about his release.

"We tried to contact Pakistan's Foreign Office to help Samad get released from India but we got no help from the Pakistani government. We just want to hear his voice, we have no hope, no one is helping us," said Ali.

Michael Kugelman, a South Asia expert at the Washington-based Woodrow Wilson Center for Scholars, said that these accidents can be very traumatizing for the families, especially if it takes a long time for them to find out what happened.

"The families won't necessarily know if their loved one is being treated well on the other side. That's why it's so important for authorities to make contact with the families as quickly as possible," he told DW.

"These cases of accidental crossings tend to have happy endings, in that the people are typically sent back. The problem is that it can often take years to get them repatriated."

Rahul Kapoor, a human rights activist India, has filed an online petition for the release of Abdul Samad. The petition has received thousands of signatures and succeeded in getting Samad consular access, with Pakistani diplomats meeting Samad at a prison in Amritsar city in March.

Pakistan and India signed an agreement in April 1974 to release such prisoners from jail who had not committed any crimes and had crossed the border by accident.

Despite the agreement and consular meeting, there hasn't been much movement in the case and Samad remains in prison.

Samad, however, is not alone in facing this ordeal. According to data released by both governments, there are 628 Indian nationals incarcerated in Pakistani jails, while 282 Pakistanis are sitting in Indian jails as of January 2022 — on charges such as illegally fishing in each other's waters.

Qamar Cheema, a political analyst in Islamabad, says that tensions and mutual distrust make the two countries view anyone crossing the border illegally as a security threat, complicating efforts to free them and ensuring that they languish in prisons for years.

Kashmir is divided between India and Pakistan and claimed by both in its entirety. Both sides have fought two of their three major wars over the region.

India has been fighting an Islamist separatist insurgency in Kashmir since the late 1980s.

New Delhi accuses Islamabad of backing the militants but Pakistan denies that, saying it only offers political support to fellow Muslims who Islamabad says are being suppressed by Indian security forces.

"The constant environment of animosity between both the countries is basically creating hurdles for people-to-people contacts," Cheema told DW. "The political class needs to give breathing space to people who cross the border by mistake, be they fishermen, farmers or any other civilians."

In addition to rivalry and mistrust, determining the identity of those caught crossing the border also poses a challenge, with people often misrepresenting their names and addresses out of fear.

This makes it tough for authorities to verify their citizenship.

Kugelman stressed that it's hard to prevent such incidents.

"The key is for border authorities to act as quickly as possible to trace these people back to their families, even while doing the necessary security protocols to make sure everything checks out," he noted.

"The good news is that in many of the cases these folks are sent home unharmed, even though it can take a long time. In a sense the whole process can be seen as a modest India-Pakistan confidence building measure."