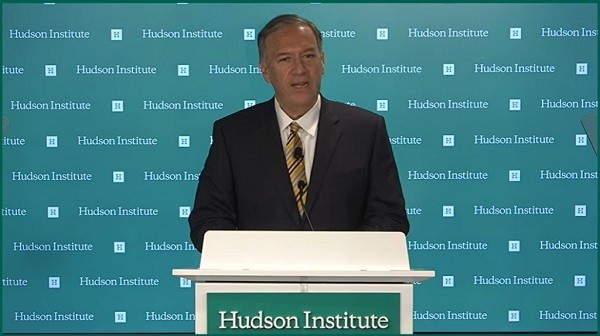 TAIPEI (Taiwan News) — Former U.S. Secretary of State Michael Pompeo during an online speech on Thursday (June 24) urged the world to form a “global alliance for freedom” to contest both Russian and Chinese aggression, the Voice of America (VOA) reported.

Pompeo said a war for freedom is taking place in Ukraine and that he supports the country to retain its sovereignty and not be “constrained by another nation’s territorial incursions or influence.” He said he is confident that Ukraine will live on and the heroism of its people will forever be remembered.

He went on to say that by assisting Ukraine, the U.S. bolsters its own security and prevents larger European conflict, a war that would almost certainly involve the U.S. military, because “we have a deep commitment to the NATO treaty and Article 5 therein.”

“By helping Ukraine we prevent Russia’s reconstitution of the Soviet empire, which would dictate world fossil fuel supplies,” the former secretary of state said. “By empowering Ukraine, we demonstrate to China the cost of invading Taiwan.”

He then switched to the topic of China’s aggression, saying that Ukraine's bravery in resisting Russia has given China pause in its intent to conquer Taiwan.

“Every president since Truman has believed Taiwan’s existence is crucial to America’s defense. I believe that with all my heart,” he said. “The 1970 Taiwan Relations Act requires that we maintain Taiwan’s defensive abilities to thwart an attack.”

He added the capture of Taiwan would severely reduce American influence in the Indo-Pacific, and that America’s status as a superpower would be placed in jeopardy.

“It would eliminate a primary technological and economic partner of the United States, the principal supplier of high-end semiconductors to the United States economy,” he said. “It would also remove the key strategic chill point to a Chinese military breakout, which would threaten the entirety of the Indo-Pacific, including Guam, Hawaii, Japan, and Australia."

Pompeo said the U.S. relationship with Taiwan should be reinforced at every turn. He insisted that the U.S. should recognize Taiwan as an independent nation.

Pompeo said he believes that in the Indo-Pacific, America must continue to expand the quadrilateral security dialogue to incorporate Korea, Great Britain and France in addition to Japan, Australia, India and the U.S.

In conclusion, he said the U.S. must help in the building of the three lighthouses for liberty: Ukraine, Israel, and Taiwan.

“They can be the hubs of new security architecture that links alliances of free nations globally, reinforcing the strength of each member state in time," he added, believing that linking these three bastions with NATO as well as the new and expanded security framework for the Indo-Pacific will form a global alliance for freedom.