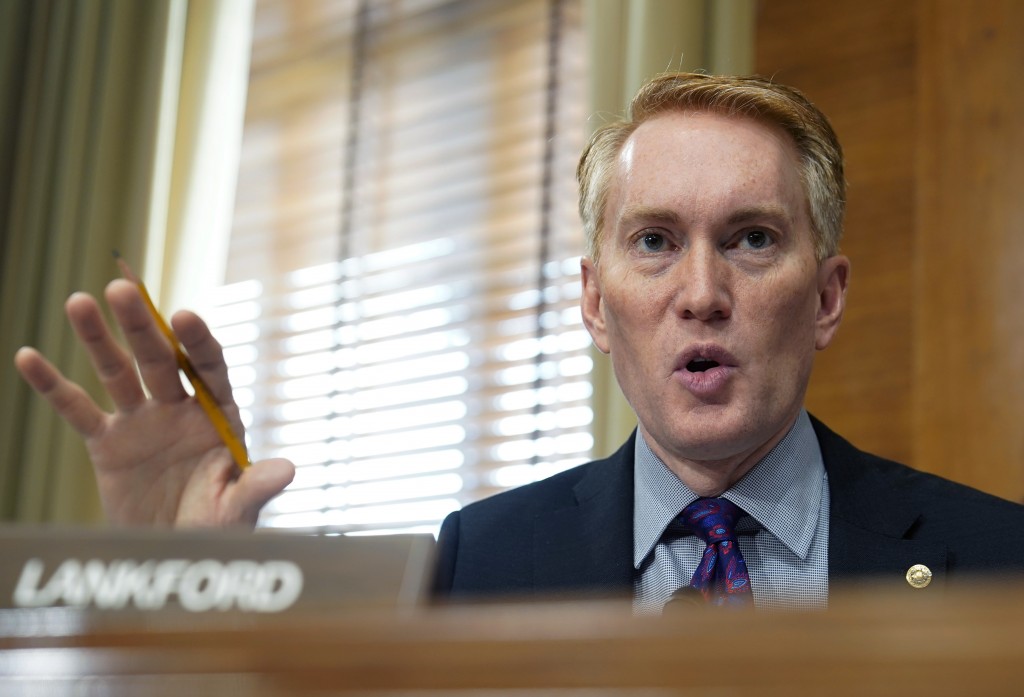 OKLAHOMA CITY (AP) — Before he became a leading voice for conservative causes on Capitol Hill, U.S. Senator James Lankford spent more than a decade as the director of youth programming at the Falls Creek Baptist Conference Center, a sprawling campground about 80 miles south of Oklahoma City that attracts more than 50,000 campers in grades six through 12 each year.

The Republican lawmaker's tenure at the camp is a prominent feature of his political profile, noted in the first paragraph of his official Senate biography. That experience is also coming under renewed scrutiny as the Southern Baptist Convention, which is affiliated with the group that owns the camp, faces a reckoning over its handling of sexual abuse cases.

In 2009, while Lankford worked at the camp, the family of a 13-year-old girl sued a 15-year-old boy who was alleged to have had sex with her at the camp. Lankford, who was not in Congress at the time, is not alleged to have had any direct knowledge of the alleged assault, has not been accused of any wrongdoing and was not a defendant in the lawsuit, which was settled for an undisclosed amount before it was scheduled to go to trial.

But in a 2010 deposition in the case, given a week after he was elected to his first term in the U.S. House, Lankford testified that he believed a 13-year-old could consent to sex.

“Yes, I think they can,” Lankford told Kenyatta Bethea, a lawyer for the girl's family, according a 155-page transcript of the deposition obtained by The Associated Press.

The age of consent in Oklahoma is 16, and although there is an exception in the law for minors between the ages of 14 and 17 who have sexual contact, there is no provision under which a 13-year-old could consent to sex. When Bethea pressed if his answer was still the same “if I ask you that question in terms of your position as a father,” Lankford maintained his stance.

Under additional questioning about whether he would allow his two daughters to consent to sex at the age of 13, Lankford gave a more expansive answer.

It’s unclear whether Lankford, who has no formal legal training, was aware of the legal age of consent at the time of his deposition. It's also uncertain whether any criminal charges were filed against the 15-year-old boy. Telephone messages left with Murray County District Attorney Craig Ladd were not returned.

The testimony is surfacing before Tuesday's primary for the GOP Senate nomination that would allow Lankford to seek another term. After early concerns that he could be vulnerable to a challenge from the right, he enters the election in a strong position. The primary winner will head into the fall general election as the overwhelming favorite in this deeply Republican state.

Aly Beley, a spokeswoman for Lankford’s reelection campaign, declined to comment for this story.

The revelation of Lankford’s testimony comes at a difficult moment for the Southern Baptist Convention.

A scathing investigative report, conducted by an independent firm, found that top SBC leaders stonewalled and denigrated survivors of clergy sex abuse while seeking to protect their own reputations. In response, the SBC voted overwhelmingly earlier this month to create a way to track pastors and other church workers credibly accused of sex abuse and launch a task force to oversee further reforms in the nation’s largest Protestant denomination.

This is not the first case of alleged sexual assault at Falls Creek, a 400-acre campground nestled in the Arbuckle Mountains. The camp is owned by the Baptist General Convention of Oklahoma, which is now called Oklahoma Baptists and is part of the SBC.

Benjamin Lawrence Petty pleaded guilty in 2018 to raping a 13-year-old Texas girl at the camp. Petty, who was a cook at the camp, tied a rope around the girl's wrists, raped her and threatened to hurt her if she told anyone, according to investigators. Petty was ultimately sentenced to probation in the case, and a civil case filed by the girl's family against the Baptist General Convention of Oklahoma was settled. The terms of the settlement were not disclosed.

Lankford no longer worked at the camp when the attack occurred.

Court records show that Rev. Lori Walke, an attorney and senior minister at Mayflower Congregational Church in Oklahoma City, served as a guardian ad litem for the Texas girl during the civil case. Walke declined to talk about details of the case, but said she attended Falls Creek as a young girl and has serious concerns about how the camp operates.

“Even as a kid, you recognize some things that feel off," Walke said. “This real obsession with the purity culture is overwhelming. The rules around clothing, particularly for girls, were just obsessed over."

“And then, the real lack of oversight, generally speaking, in all other matters," she added. "It was absolutely due to the fact that there’s just not enough adults around."

Oklahoma Baptists did not respond to questions about how many cases involving sexual misconduct at Falls Creek have been settled. In a statement, Executive Director-Treasurer Todd Fisher said the recent vote to approve recommendations from the SBC’s task force will bring about needed national reforms.

“I am thankful Oklahoma Baptists already made significant steps toward preventing abuse in Oklahoma, implementing a number of best practices in all areas of our ministries, including at our encampments,” Fisher said.

Oklahoma Baptists spokesman Brian Hobbs said some of those best practices for Falls Creek include mandatory background checks for anyone 18 and older, increased security, professionally developed safety training for all camp staff and church leaders bringing groups to the camp and protocols for reporting abuse or suspected abuse.

During his deposition, Lankford said he had no problem sending his daughters to the camp, including in instances when he was not present, though he acknowledged that supervision wasn't perfect.

“I know that our adults are watching out for our kids, but the process of that, obviously I can't guess for every adult how they're going to handle it,” Lankford said.