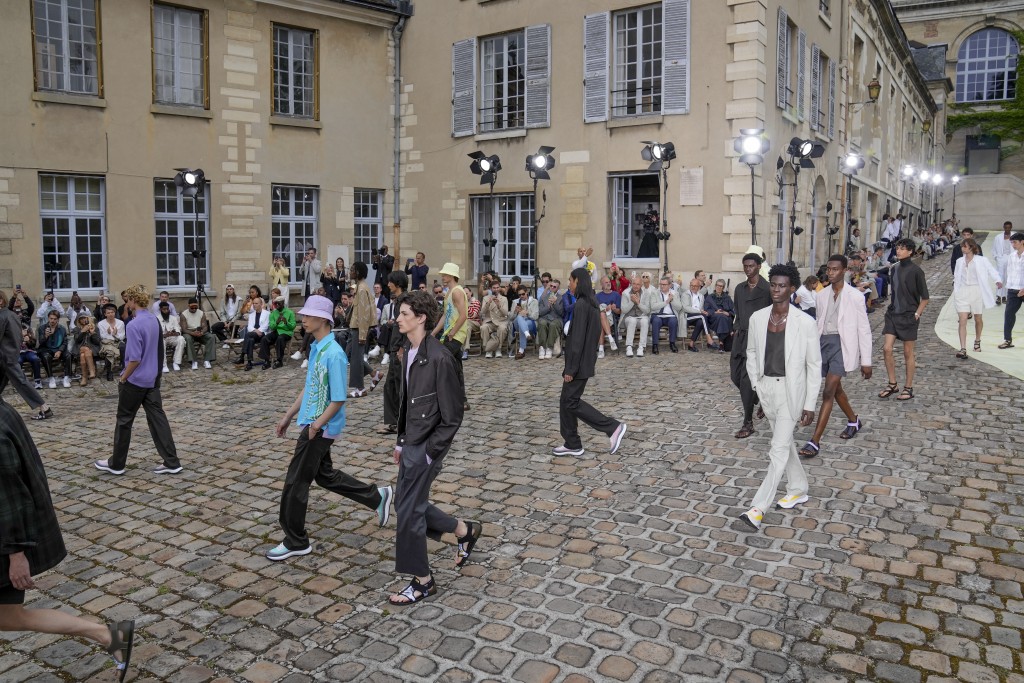 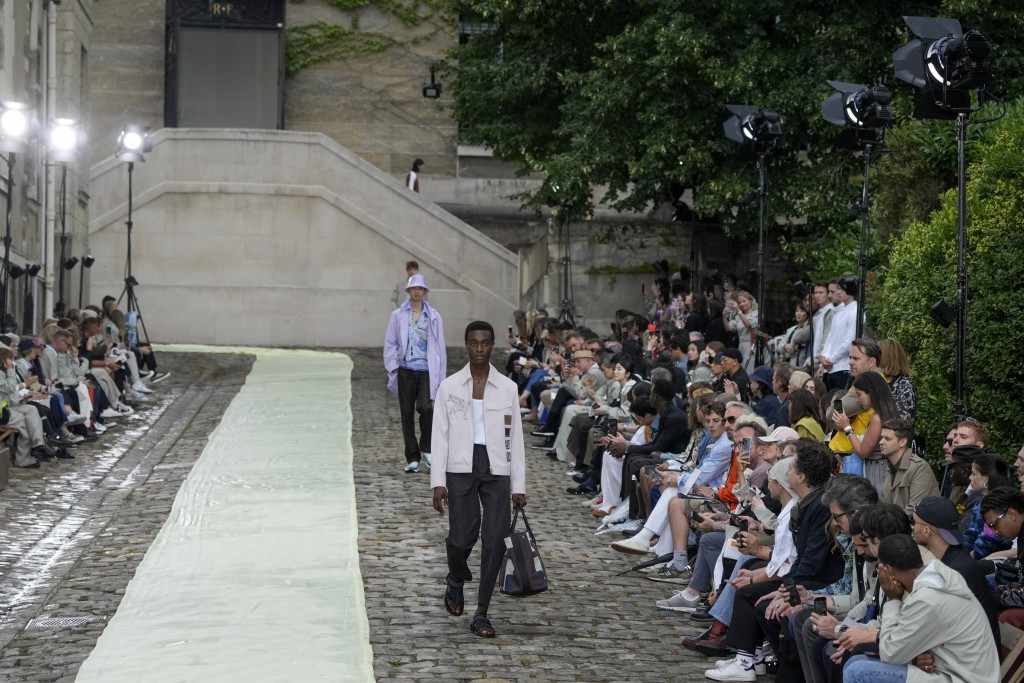 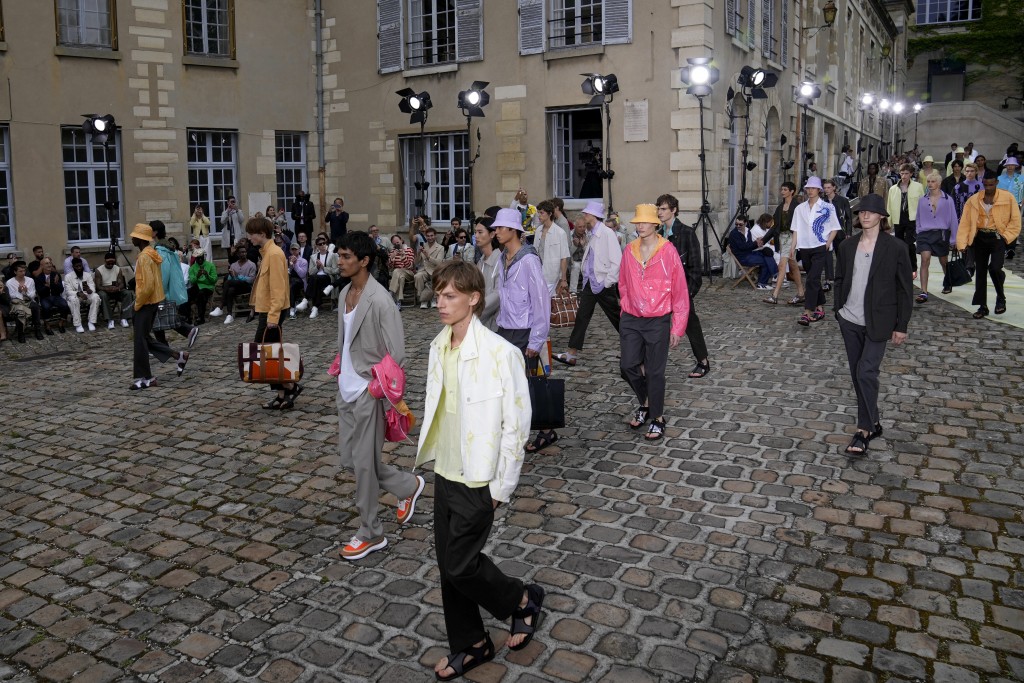 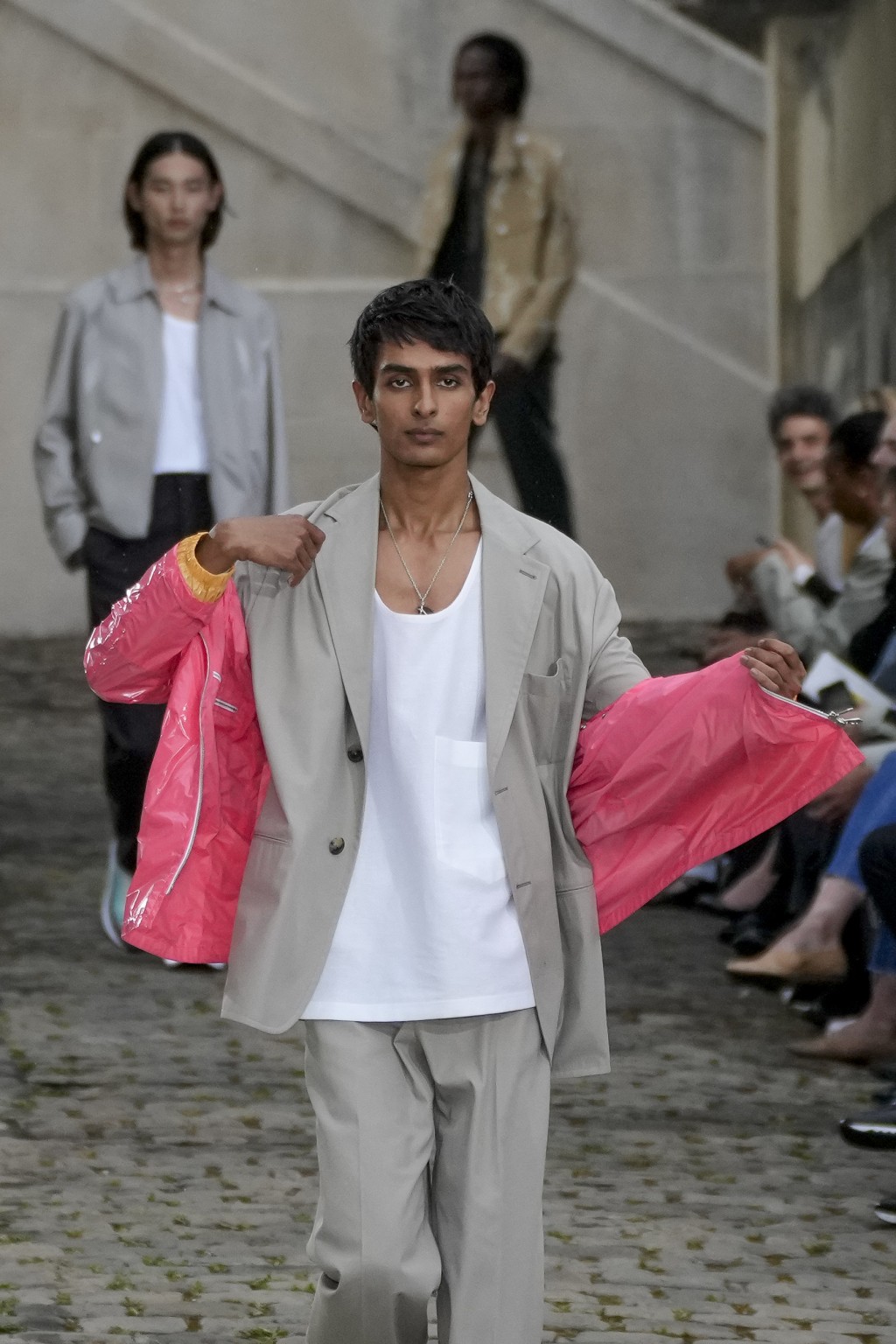 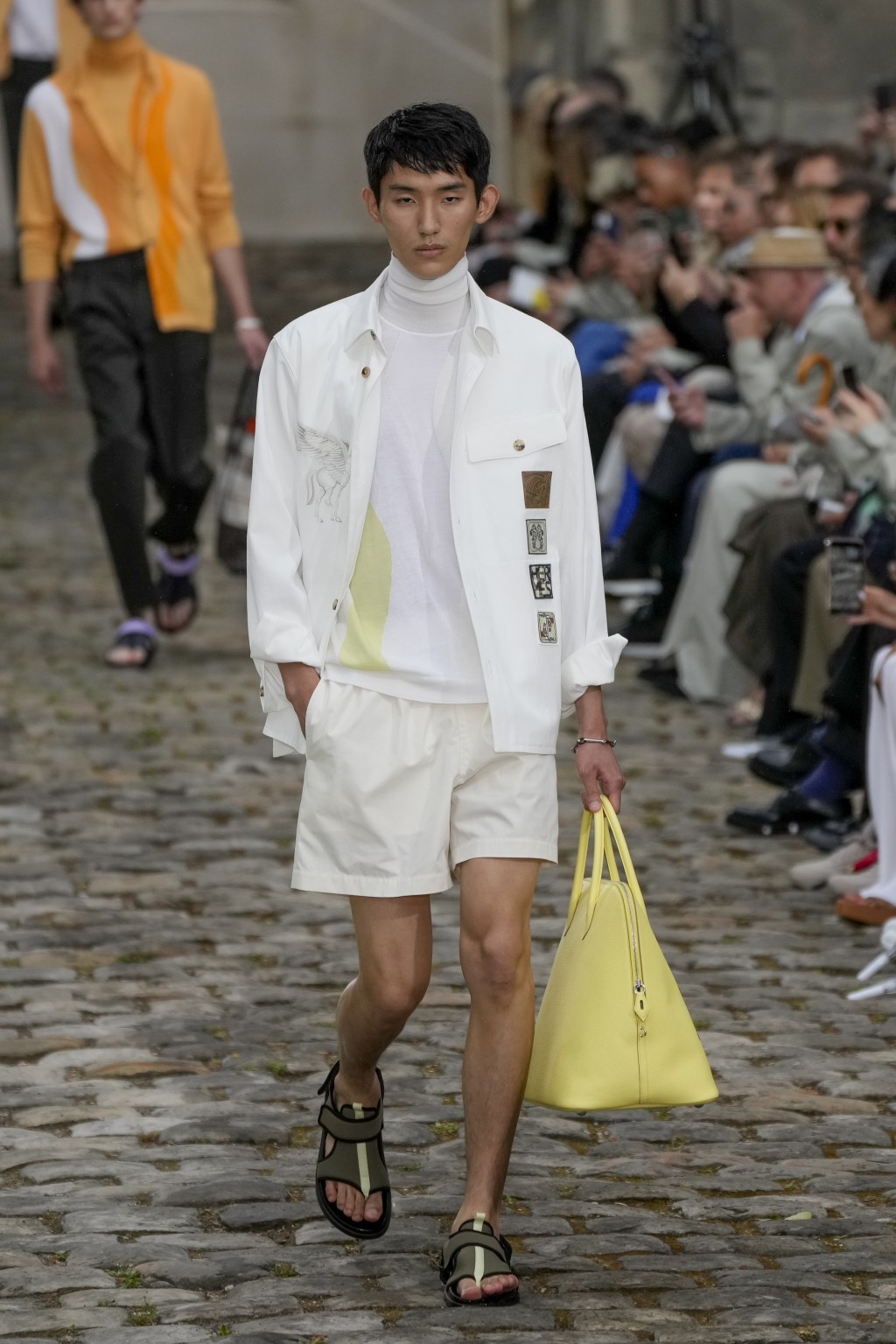 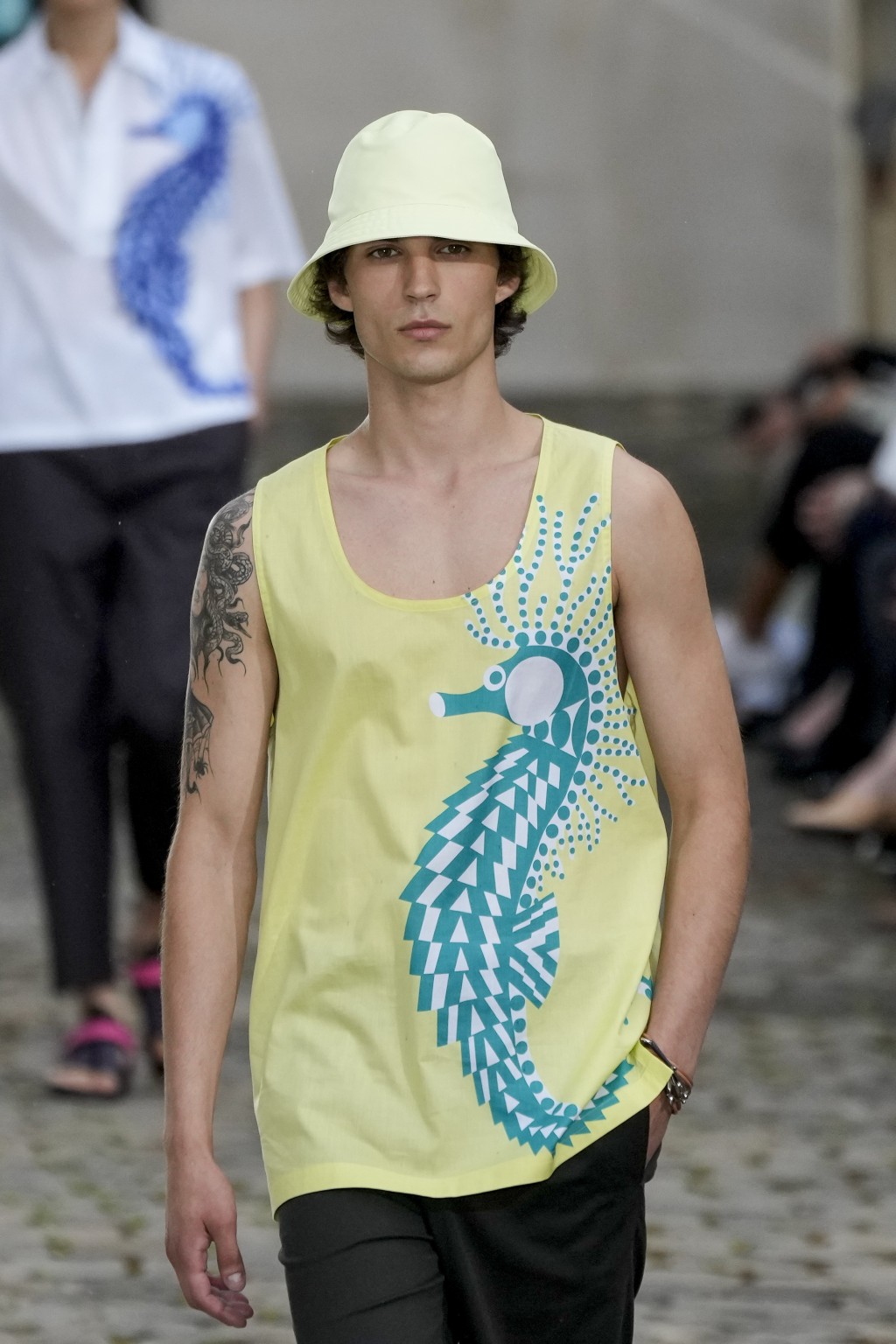 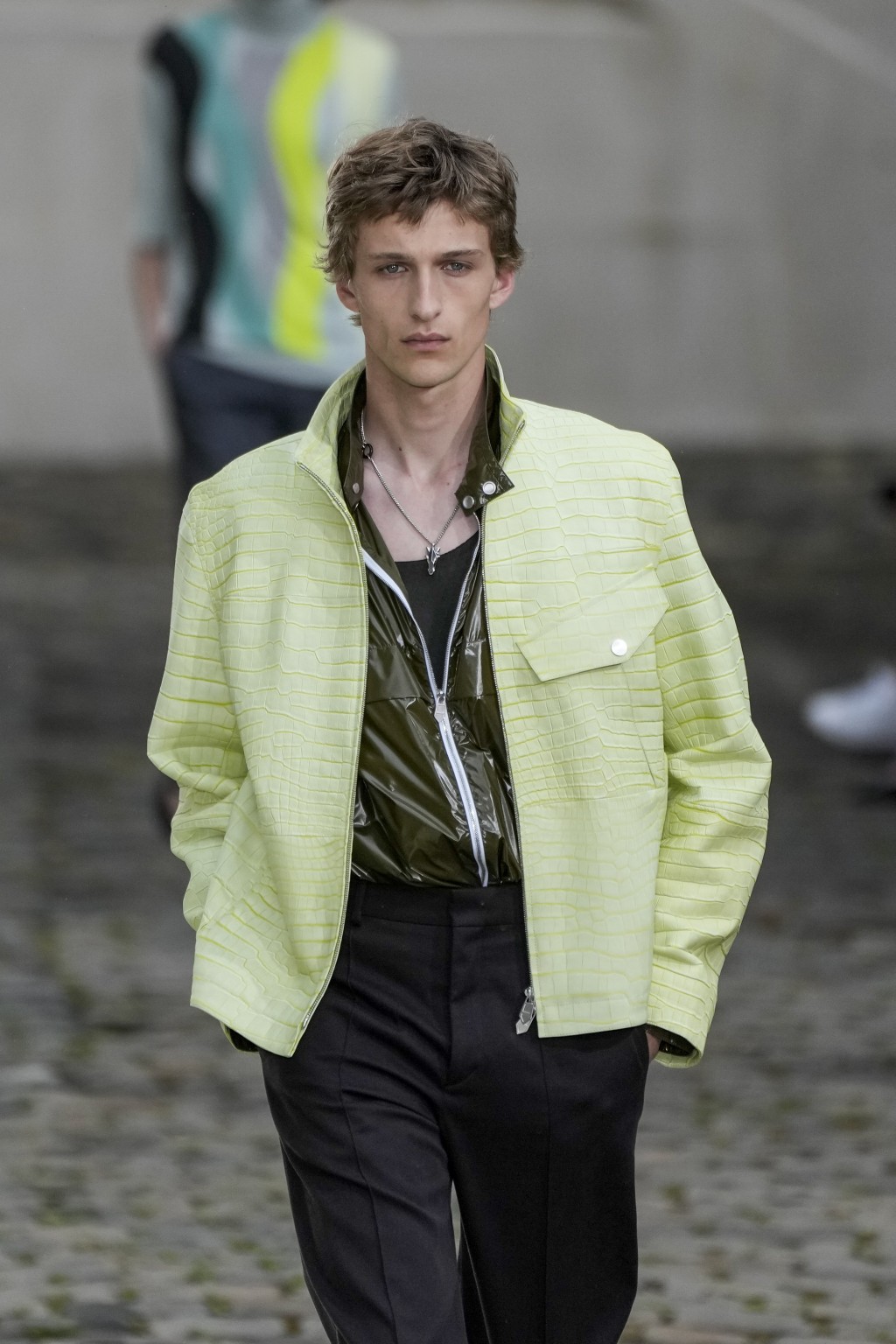 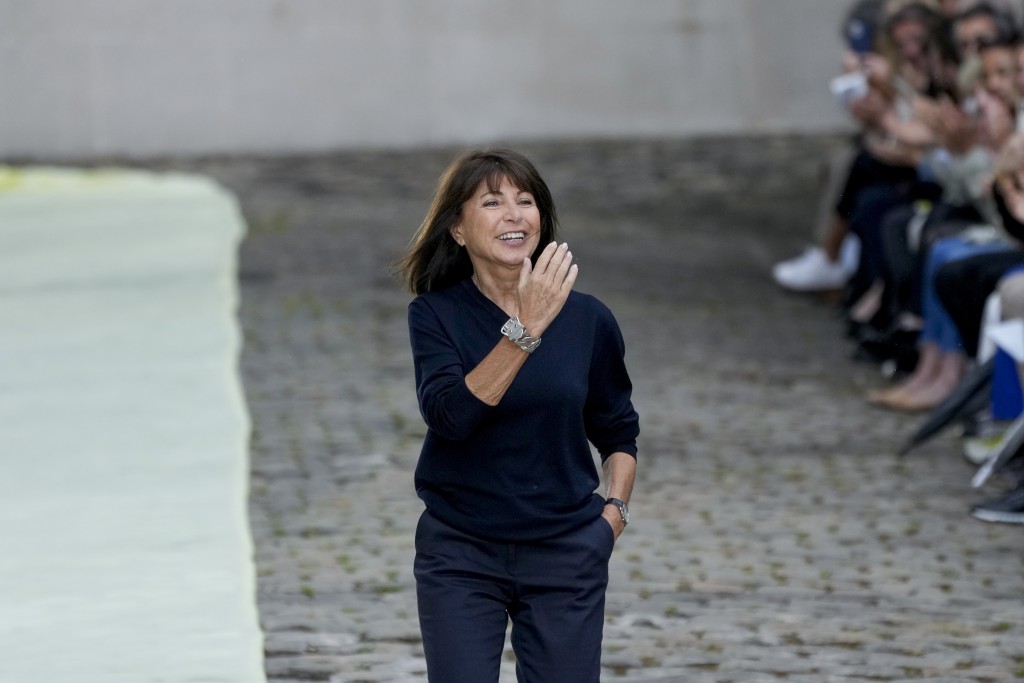 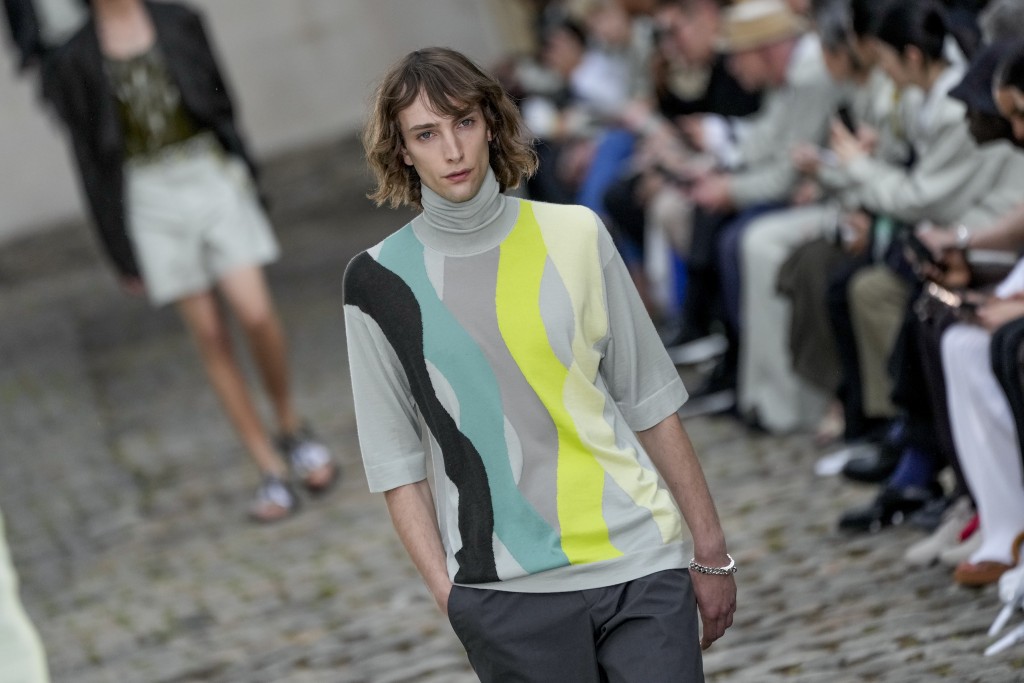 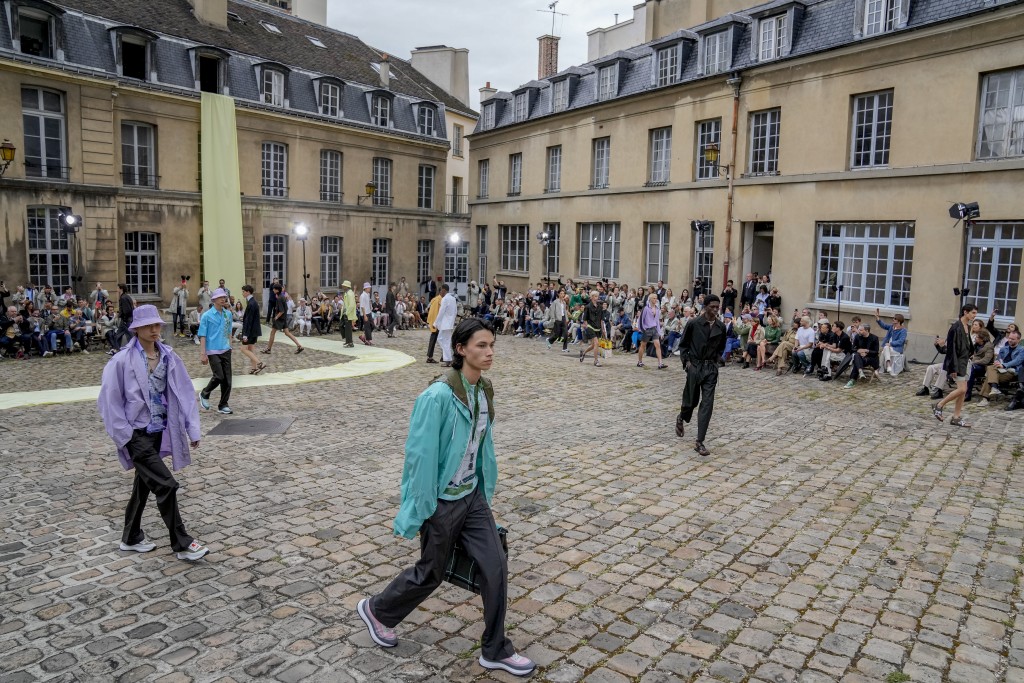 PARIS (AP) — Loewe thrust Paris Fashion Week into a bleak and dystopian vision of the future on Saturday -- turning its runway into a dead space where nature and animal life only existed to be harnessed and exploited by humankind. A sanitized white wall descended onto a bare deck as models walked by robotically, bathed in misty white light.

Here are some highlights of spring-summer 2023 menswear collections:

Models wore plates of television screens showing deep water fish in the ocean, and plasma screen visors beamed out growing chrysanthemums. The only place that grass grew in designer Jonathan Anderson’s fashion dystopia was literally out of shoes, where green blades quivered and flapped surreally as the automatons filed by.

The British designer used the remarkable set and concept not only as a springboard for some of the most accomplished designs seen this season, but to make a thoughtful comment about ecology and humanity’s contempt for the natural world. If we continue, Anderson warned, that world will be destroyed and the only way to see bees will be on video.

The organic versus the robotic was explored in Anderson's conceptual designs that were intentionally off-kilter. A white minimalist sweater had surplus sleeves that flapped about limply at the side of the model, on top of white sports leggings and loafers sprouting 10-centimeter (4-inch) clumps of grass.

Bare chests and legs exposed vulnerability, while hard, square-strap bags slung across the shoulder added a contrasting fierceness. But the piece de resistance must have been the giant mustard toggle shoes that looked like the hooves of a horse but could equally have come from the set of a “Star Wars” planetary village. A tour de force!

THE ART OF THE INVITATION

The art of the chic invite is still very much a staple of the luxury industry in Paris.

Houses compete to produce the most eye-catching, inventive and flamboyant show invitations, delivered often by gas-guzzling couriers to each guest’s personal or professional address with little thought for the climate.

The little works of art sometimes provide a hint as to what a collection has in store; other times, they are just plain wacky.

Louis Vuitton’s sent out a huge board game -- something akin to a trendy snakes and ladders -- for its invite to a show plunging guests into the creative universe of the late designer Virgil Abloh.

For Dior’s bloom-inspired show, the house sent out flower seeds that one fashion reporter planted and have already produced sprouts.

But surely Loewe’s “invite” was the most bizarre: A limp box of real watercress growing in soil.

British designer Craig Green, who was appointed a Member of the Order of the British Empire (MBE) by Queen Elizabeth II this year for his contribution to fashion, is one menswear designer who continues to impress.

On Saturday he brought his utilitarian-edged wares from London back to the Paris runway for an inventive, fashion-forward take on uniforms.

Green developed his cutting-edge aesthetic after internships with names such as Walter van Beirendonck and Henrik Vibskov, leading to collaborations with Moncler.

Dangling stirrups, straps, pockets and accessories saw equestrian and fencing wear in pastel shades deconstructed with a transgressive or even an aggressive edge.

Green blurred the line deftly between art and fashion. One DIY look -- with a top that seemed to be an upside-down sink with a builder’s ladder on the back -- also evoked an armor breastplate.

Is Green steadily taking the mantle of the late Alexander McQueen?

Cowgirls and cowboys mingled in Casablanca’s eye-popping show that was notable for its highly unusual set. The co-ed collection was staged in front of several fenced-off horses that paid little attention to the clothes, passed waste nonchalantly and sniffed in the opposite direction.

Designer Charaf Tajer cared little for the indifferent equine reaction, sending down the runway energetic and enthusiastic looks that harked from the heartland of American rodeos and the Wild West.

It was a lot of fun.

Flamboyant shirt paneling in camp, pastel hues accompanied stiff, oversized lapels that were a take on the cowboy jacket. They were sometimes accessorized with large Liberace-style cowboy hats.

Color-blocking and vivid patterns added even more visual flair as bright red pants made for a dizzying contrast with a peak-shouldered canary coat and patches of pale blue.

Gentle geometry and loose proportions paraded down the cobbled stone of The Gobelins Manufactory, a historic tapestry factory in Paris’ chic Left Bank.

Hermes has become a byword for simple, unpretentious luxury. Veteran menswear designer Veronique Nichanian, who’s been at the design helm over three decades, proved this again on Saturday in a classy and masculine showing that riffed on the 1980s.

It was a more relaxed affair than usual, with contemporary takes on Roman sandals and boxy, comfy baggy shorts.

There were the expected studies in contrasts. Tensions appeared in the proportions, such as in one oversize pastel gray jacket worn over a low-slung vest and high shorts. Difference appeared in fabric textures and colors: one sheeny taupe shirt came under a honeydew leather jacket above fluid black pants.

There was no far-flung concept, gimmick or muse, unlike most Paris shows, simply because none was needed.