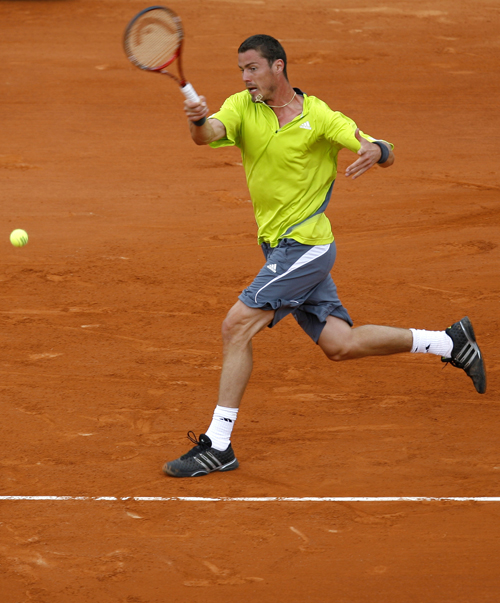 Heavy rain and biting cold brought havoc to the opening day of the French Open yesterday with only former world number one Marat Safin managing to book a place in the second round.
The Russian eased past Spanish qualifier Fernando Vicente 6-1, 6-3, 6-1 as the second Grand Slam tournament of the season got off to a soggy start.
Safin, the 22nd seed here and a semifinalist in 2002, will face either Janko Tipsarevic or Dusan Vemic for a place in the third round.
The rain, which eventually brought a suspension of play to all courts yesterday afternoon, came as a relief for 2002 women's champion Serena Williams.
The American winner of eight Grand Slam titles, seeded eight and playing at Roland Garros for the first time in three years, was 5-6 down to Tsvetana Pironkova when play was halted with the Bulgarian 19-year-old serving for the opening set.
Twenty-four matches had been scheduled for the opening day of the 2007 championship but with no let-up in the torrential rain, organizers were forced to cancel a third of the planned program.
Safin, playing in his ninth French Open, looked impressive against the 133-ranked Vicente and wrapped up his center court win in just 84 minutes hitting 43 winners to the Spaniard's 14.
"They were very tough conditions, it was raining, then it wasn't and it was very windy," said Safin who refuses to write off his chances of winning a French Open title despite the likely domination of the tournament by defending champion Rafael Nadal and world number one Roger Federer.
"This is still my favorite surface. The courts here are great, the bounce is good. It's my place. If I can get through a few rounds I can be dangerous."
The former US and Australian Open winner has endured a mediocre season so far with a best performance of a semifinal run at the Las Vegas event in March where he lost to Lleyton Hewitt.
It was also the last time the unpredictable Russian managed to win consecutive matches at the same tournament.
Yesterday, the 27-year-old, who had lost to Vicente in St. Petersburg in 2003 in their only previous encounter, was never in trouble, unleashing his big, double-fisted backhand to devastating effect.
Once he had enjoyed three comfortable breaks in the first set, which was wrapped up in only 25 minutes, Safin was cruising.
In stark contrast, Serena Williams was struggling against Pironkova, the world 91. The 25-year-old Australian Open champion slipped 2-5 down before the Bulgarian allowed her opponent to claw back to 5-5, having squandered two set points.
Later Sunday, Justin Henin was scheduled to open her campaign against Russia's Elena Vesnina. But with the heavy rain expected to continue, and temperatures plummeting, it was looking increasingly likely that Safin's victory would remain the only significant action of the day.