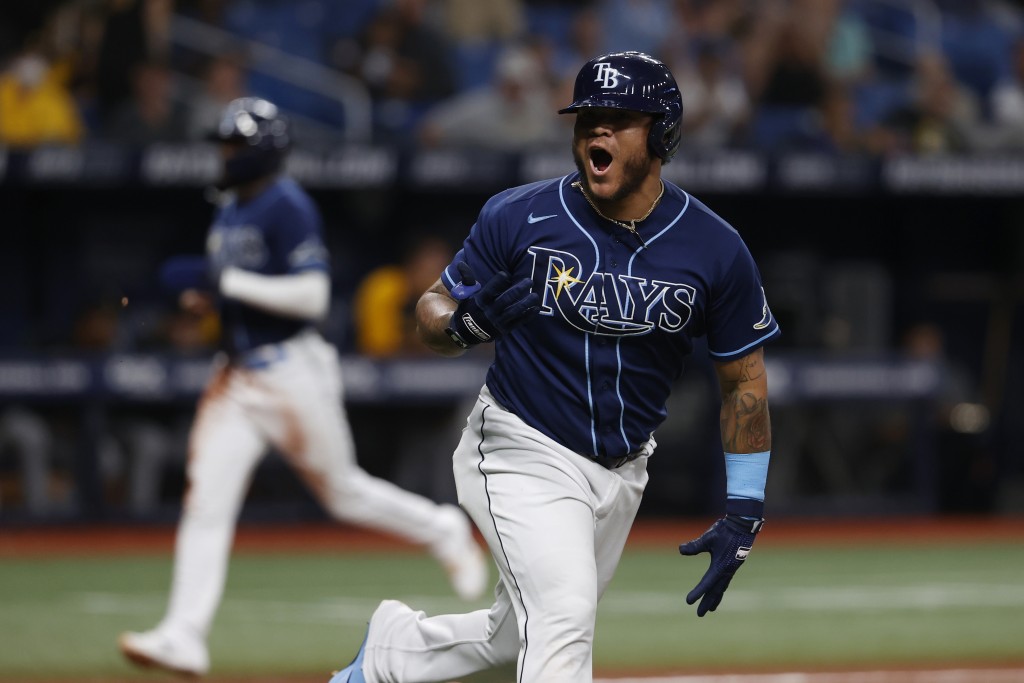 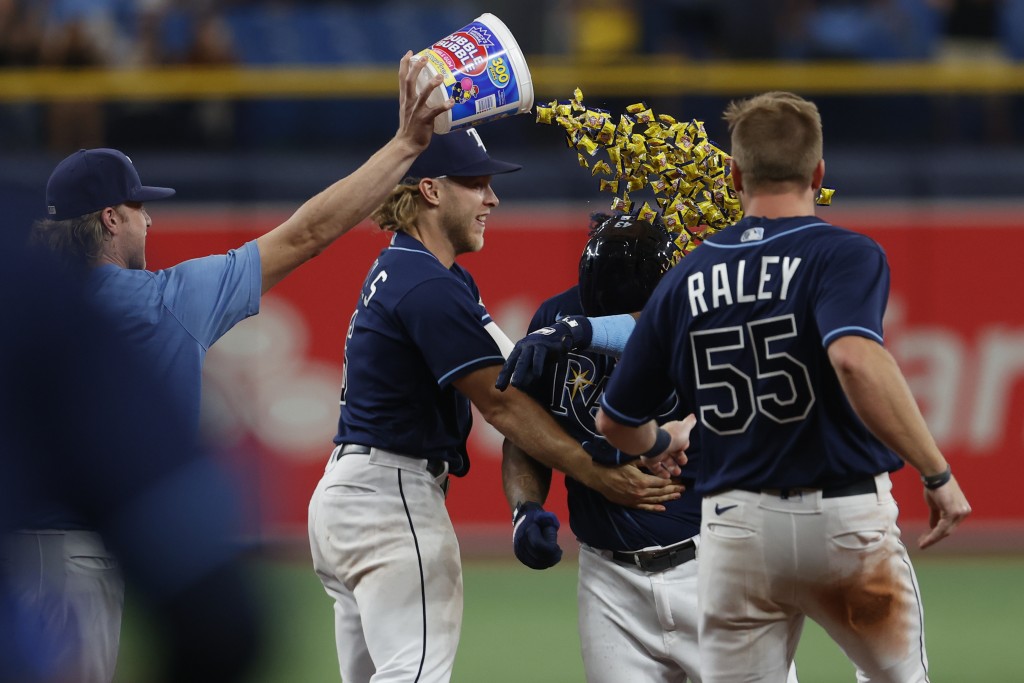 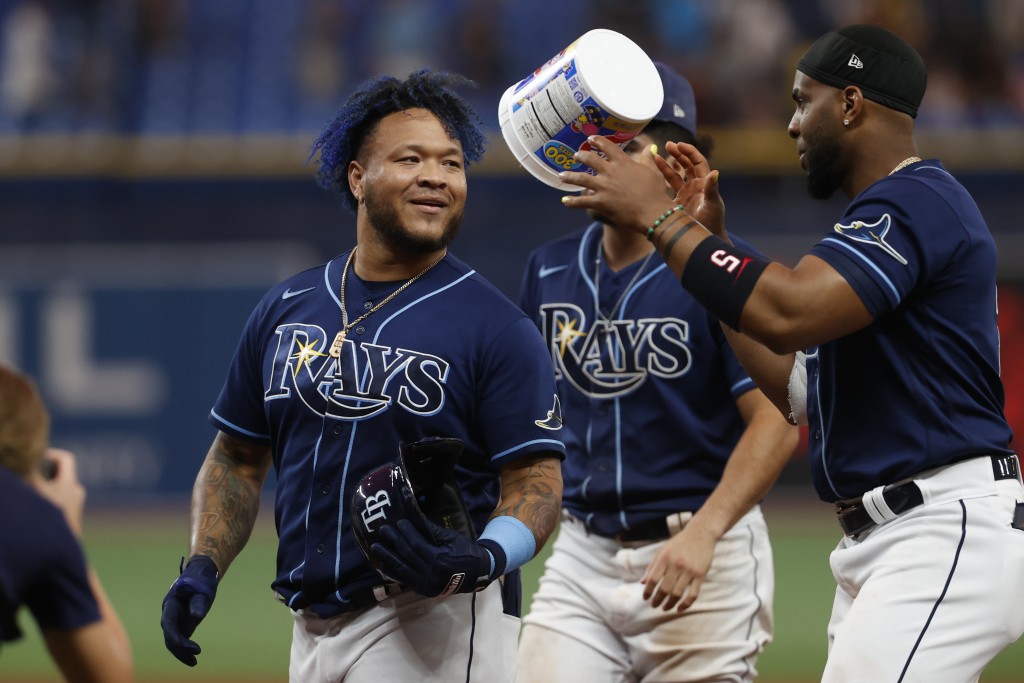 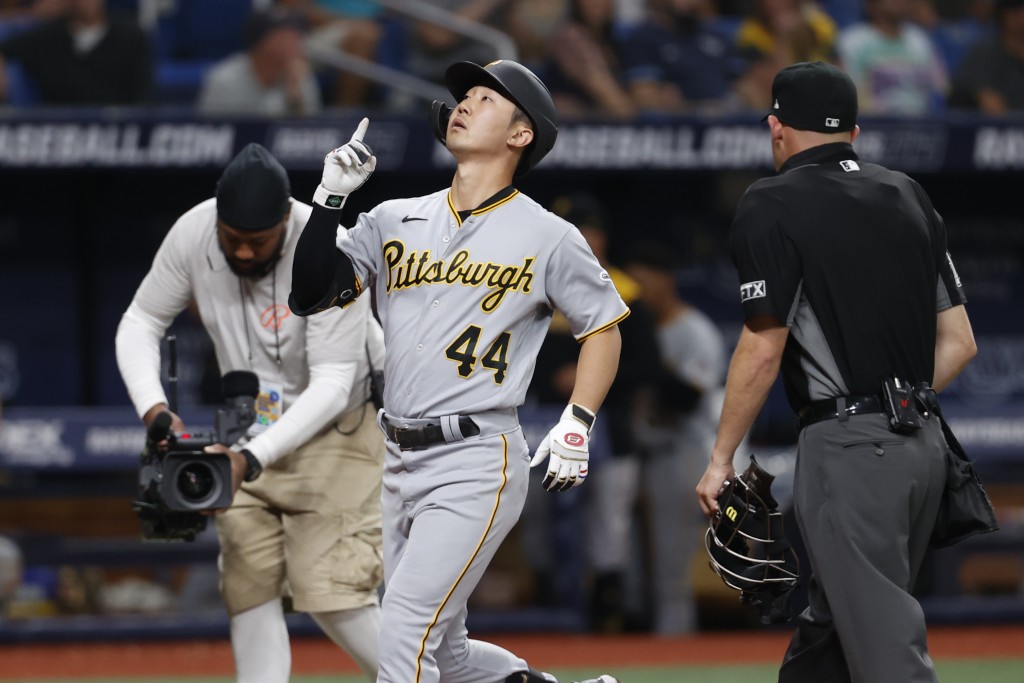 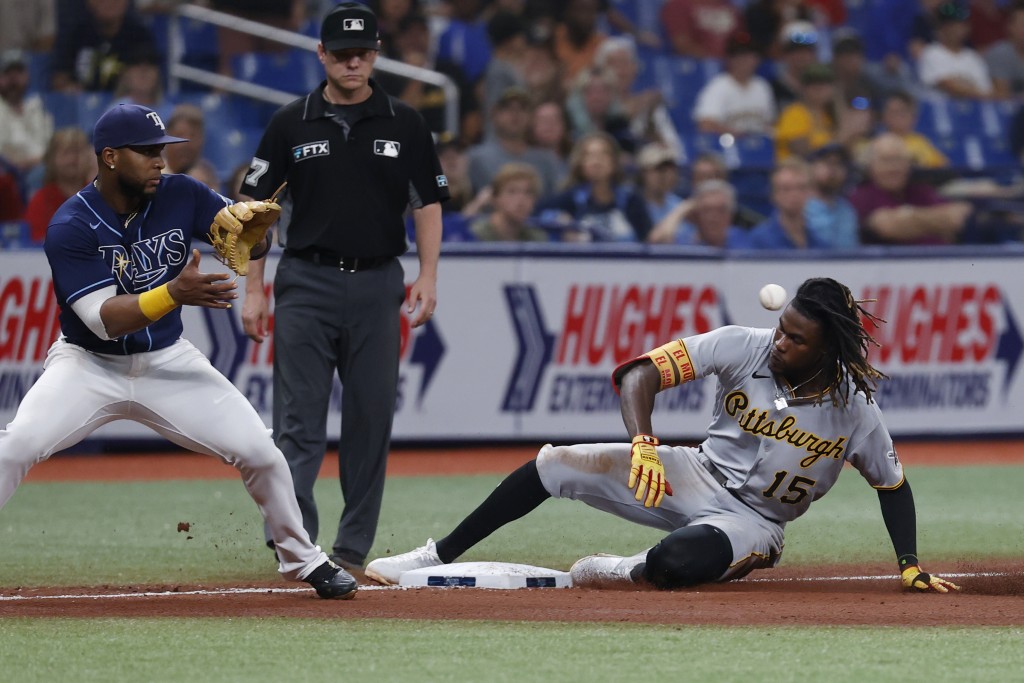 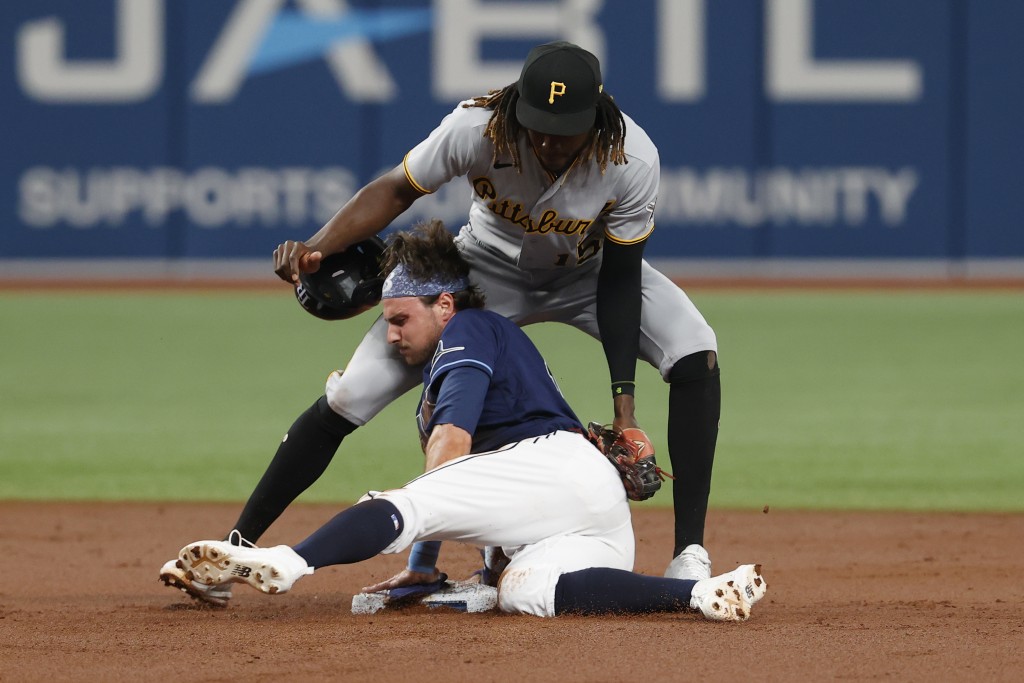 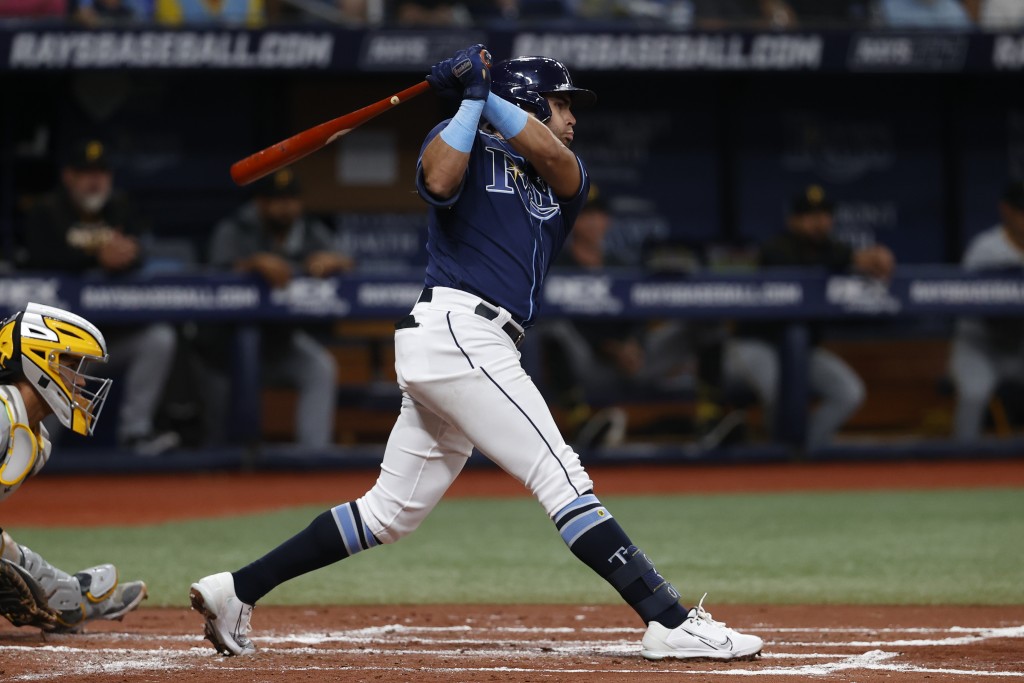 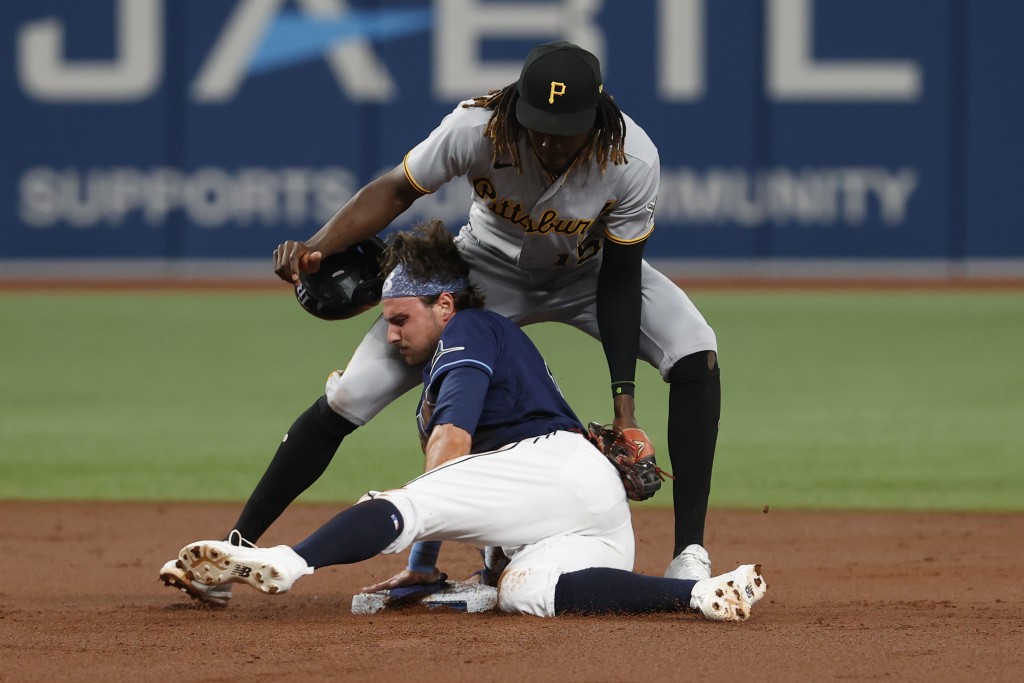 “He gets hits all the time, so with a guy like that, you've got to be ready,” Brujan said through a translator. “I wanted to get to third base because I knew he was going to at least connect on something.”

Three home runs had pulled the Pirates back from a 3-0 deficit, but they couldn't score in the 10th despite an infield single by Hoy Park.

“We battled back and gave ourselves a chance to win and had an opportunity in the 10th and just didn’t capitalize on it,” Pirates manager Derek Shelton said. “We had first and third with no outs and didn’t score. We have to execute there and we didn’t.”

Luke Raley and Jonathan Aranda, playing in their first games for the Rays, drove in runs with singles to put the Rays up 2-0 in the second, and a balk by Pirates starter Mitch Keller made it 3-0.

The Pirates tied it with three solo homers off starter Jeffrey Springs. Michael Chavis hit his eighth homer in the fourth, and Diego Castillo followed two batters later with his sixth. Park led off the fifth with his second homer.

“I would like to have those back, but solo shots typically don’t beat you. I can live with those,” said Springs, who threw a career-high 102 pitches.

Springs struck out nine in six innings, giving up three runs on seven hits. The Pirates struck out 17 times and drew no walks against five Rays pitchers.

Pirates rookie Oneil Cruz failed to drive in a run after having an RBI in his first six major league games, a franchise record and one short of the major league record set by Detroit's Dale Alexander in 1929.

Pirates: OF Ke’Bryan Hayes had a sore left shoulder after a collision at home plate while scoring the winning run Thursday, but he hopes to play this weekend. ... LHP Dillon Peters and RHP Duane Underwood will throw live batting practice Saturday to IF Tucupita Marcano and OF Jack Marisnick. All four are on the injured list and will be re-evaluated for rehab assignments.

Rays: SS Wander Franco (right quad strain) was scheduled to DH in his final rehab game for Triple-A Durham on Friday night, then return to be evaluated by Rays trainers on Saturday. ... OF Manuel Margot was moved to the 60-day IL, but his diagnosis isn't as bad as feared. Tampa Bay worried he had torn his right ACL, but he was instead diagnosed with a right patellar tendon strain. He will not return until late August at least. ... RHP Drew Rasmussen, who has missed two starts with a left hamstring strain, will pitch three innings in a simulated game in Port Charlotte on Saturday.

The bottom six hitters in the Rays injury-depleted batting order had a combined .164 batting average and a total of 500 games of major league experience. That included Raley and Aranda, who were called up from Triple-A Durham on Tuesday.

Shelton, who served as Tampa Bay’s hitting coach from 2010 to 2016, managed against the Rays for the first time Friday night.

The Pirates were scheduled to open against the Rays in 2020 in what would have been Shelton’s managerial debut, but COVID-19 shut down that season until late July and those games were cancelled.