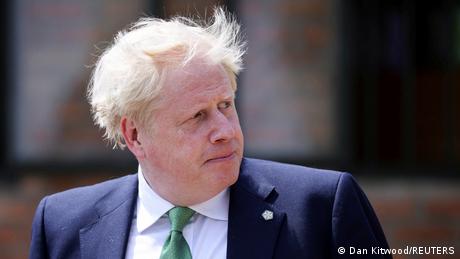 British Prime Minister Boris Johnson's ruling Conservative Party lost two by-elections on Friday, just weeks after the embattled leader narrowly survived a bid by his own lawmakers to oust him as premier and party head.

The twin defeats, one in a southwestern English district that the Conservatives previously held for more than a century, are set to put Johnson under even more pressure after months of scandals and setbacks.

The by-elections themselves were products of scandals, with the two seats becoming vacant after their Conservative MPs resigned in disgrace over sex-related incidents.

What were the by-election results?

The Conservatives lost the seat of Tiverton and Honiton in England's southwest to the centrist Liberal Democrats, who secured a majority of more than 6,000. Previously, residents there had voted Conservative in every general election since the 1880s.

The other constituency, Wakefield in northern England, went to the main opposition Labour party, which won by nearly 5,000 votes. Wakefield, near the city of Leeds, was taken from Labour by Johnson at elections in 2019 on the back of promises to address regional economic equalities.

Tiverton and Honiton became vacant after ex-lawmaker Neil Parish quit after admitting watching pornography on his phone in the House of Commons, while in Wakefield, Imran Ahmad Khan was jailed for sexually assaulting a teenage boy.

Why is Johnson under pressure?

Johnson has faced many calls to resign both from within his party and from opposition lawmakers after he was fined for breaking COVID-19 lockdown rules following a police investigation into gatherings at his offices.

The two by-elections were the voters' first chance to give their verdict on Johnson since he was fined.

At a no-confidence vote this month that he only just survived, 41% of his parliamentary colleagues voted to oust him, and he is under investigation by a committee over allegations that he intentionally misled Parliament.

A cost-of-living crisis that is partly seen as a result of Britain's departure from the EU, known colloquially as Brexit, has also undermined trust in the government. Johnson led the Conservatives to their biggest majority in three decades at the 2019 national election with the vow to "get Brexit done" a prominent feature in his platform.

The government has also been heavily criticized from many quarters over its scheme to send asylum-seekers to Rwanda, a country that has come under fire from human rights activists.

Calls for Johnson to quit

In their victory speeches, the two newly elected MPs, Liberal Democrat Richard Foord in Tiverton and Honiton and Labour's Simon Lightwood in Wakefield, both urged Johnson to resign.

"Tonight, the people of Tiverton and Honiton have spoken for Britain. They've sent a loud and clear message: It's time for Boris Johnson to go, and go now," said Foord.

In a statement, Labour leader Keir Starmer said the result in Wakefield showed that "the country has lost confidence in the Tories [Conservatives]."

"This result is a clear judgment on a Conservative Party that has run out of energy and ideas," he added.

However, Johnson on Thursday rejected the suggestion that he could resign if the Conservatives lost both seats as predicted, saying it was common for governing parties to lose mid-term by-elections.

The next national elections are expected in 2024.