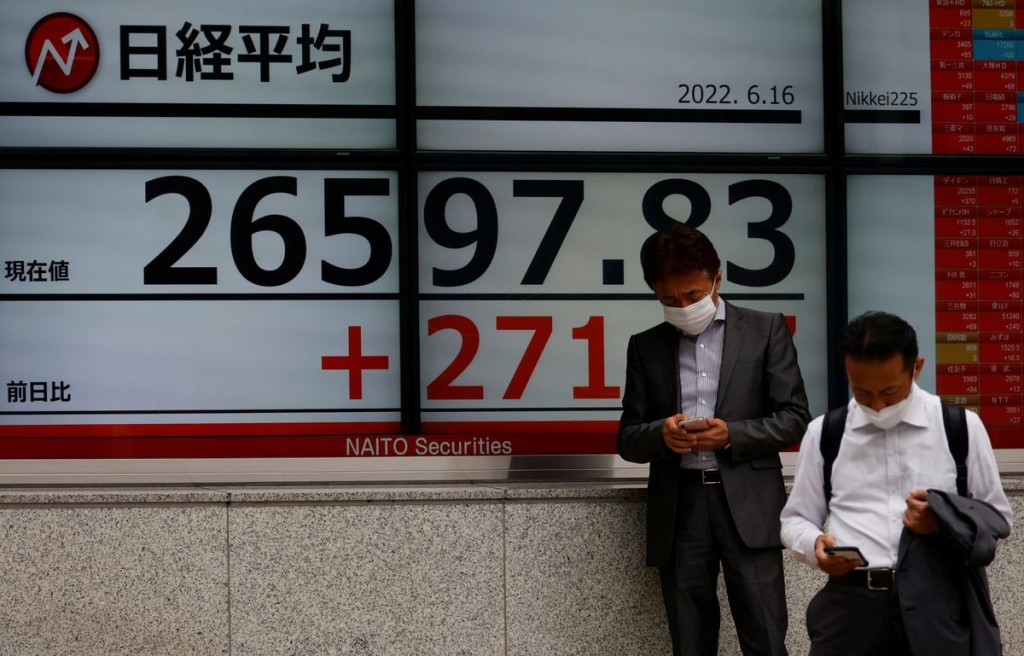 Stocks and bonds were both headed for their first weekly gain in a month on Friday as investors wagered on central banks bringing inflation to heel, though growth fears dragged on commodities.

Copper, a bellwether for economic output with its wide range of industrial and construction uses, slid 3% in Shanghai and is down more than 7% for the week - its sharpest weekly fall since the pandemic-driven financial markets meltdown in March 2020.

Oil also fell overnight, and Brent crude futures are down 2% on the week to $110.62 a barrel, while benchmark grain prices sank with Chicago wheat off nearly 9% for the week and at its lowest since March at $9.42 a bushel.

The price falls have made for some relief in equities since energy and food have been the drivers of inflation. After some heavy recent losses, MSCI's World equities index (.MIWD00000PUS) is up 2% on the week.

MSCI's broadest index of Asia-Pacific shares outside Japan (.MIAPJ0000PUS) rose 1% on Friday, flattered by short sellers bailing out of Alibaba (9988.HK) - which rose 5% - amid hints that China's technology crackdown is abating.

"While market worries about an abrupt slowdown are the culprit behind recent moves lower in raw materials prices, lower commodity prices do feel like they could be just what the doctor ordered for the global economy," said NatWest markets strategist Brian Daingerfield.

"So much of our hard landing fears relate to concerns that link back to commodity prices."

Soft data through this week has been to blame.

Gauges of factory activity in Japan, Britain, the euro zone and United States all softened in June, with U.S. producers reporting the first outright drop in new orders in two years in the face of slumping confidence.

Bonds rallied hard on hopes the bets on aggressive rate hikes would have to be curtailed, with German two-year yields down 22 basis points in their biggest drop since 2008.

The benchmark 10-year Treasury yield fell 7 bps overnight and was steady at 3.0944%.

The U.S. dollar has slipped from recent highs, but not too far as investors remain cautious. It was last fairly steady at $1.0529 per euro and bought 134.79 yen .

The battered yen has steadied this week and drew a little support on Friday from Japanese inflation topping the Bank of Japan's 2% target for a second straight month, putting some more pressure on its ultra-easy policy stance.

European Central Bank and Federal Reserve speakers will be watched closely later in the day, as will British retail sales data and German business confidence. Beyond that, the main worry is what it all means for company performance.

"Second quarter earnings reports will send shockwaves to the market as the earnings outlook hasn’t deteriorated materially so far, and that will further build concerns of a recession," said Charu Chanana, market strategist at brokerage Saxo in Singapore.