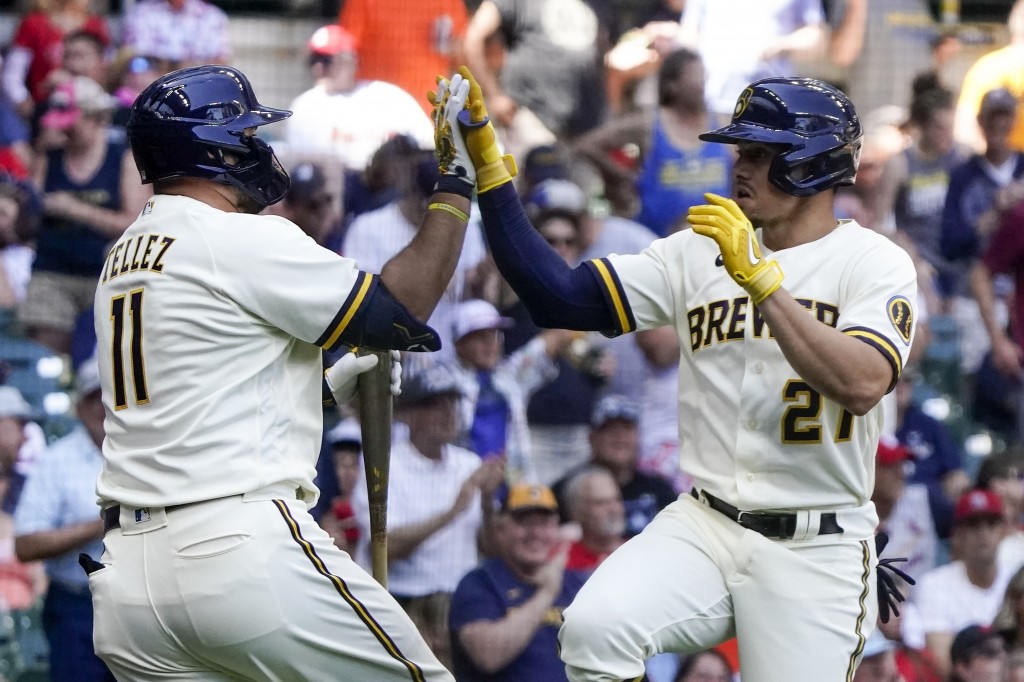 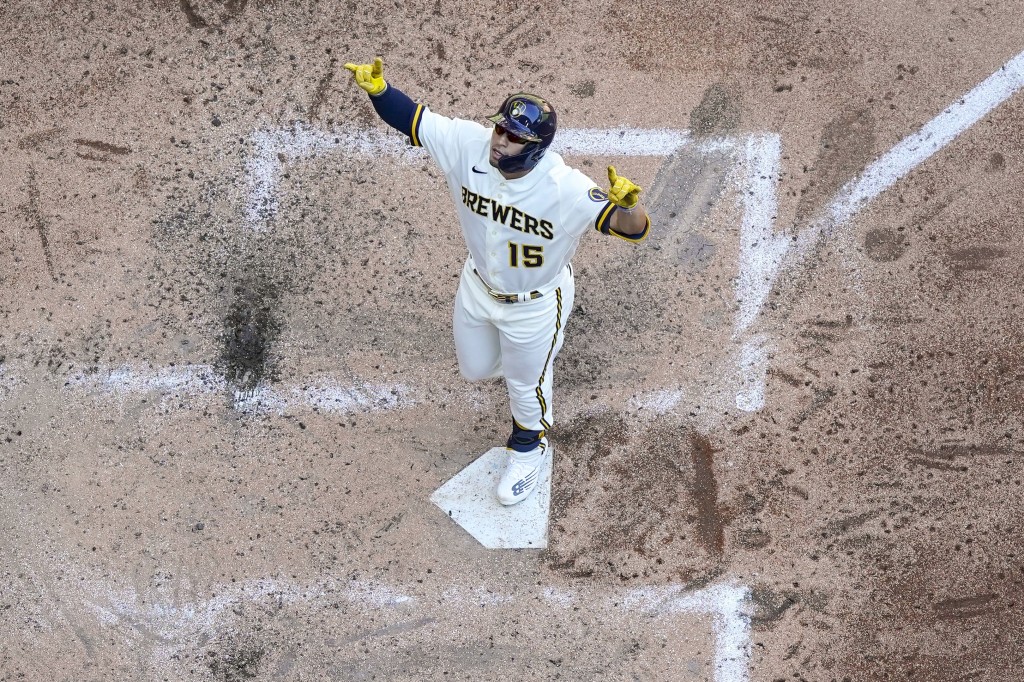 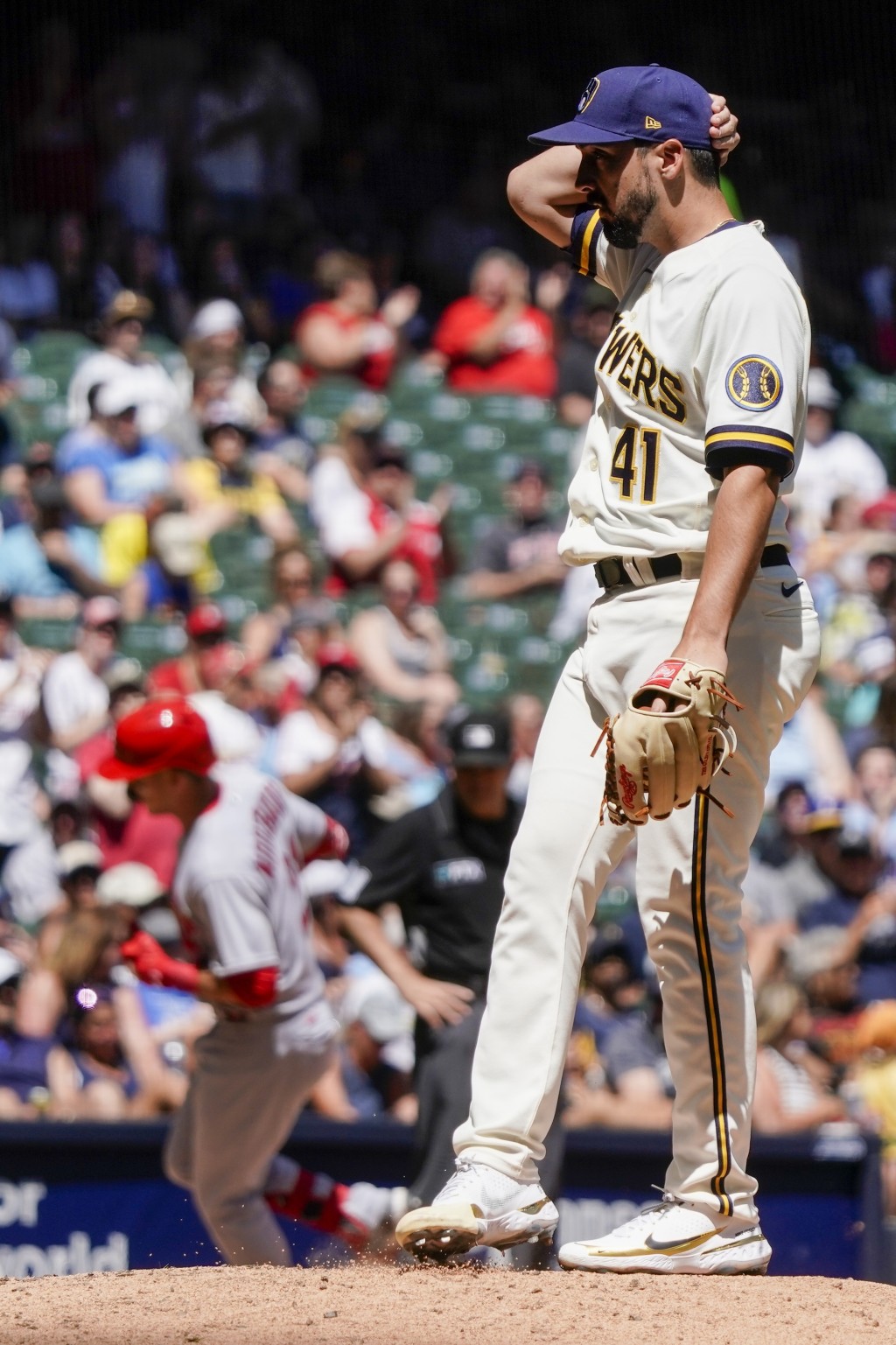 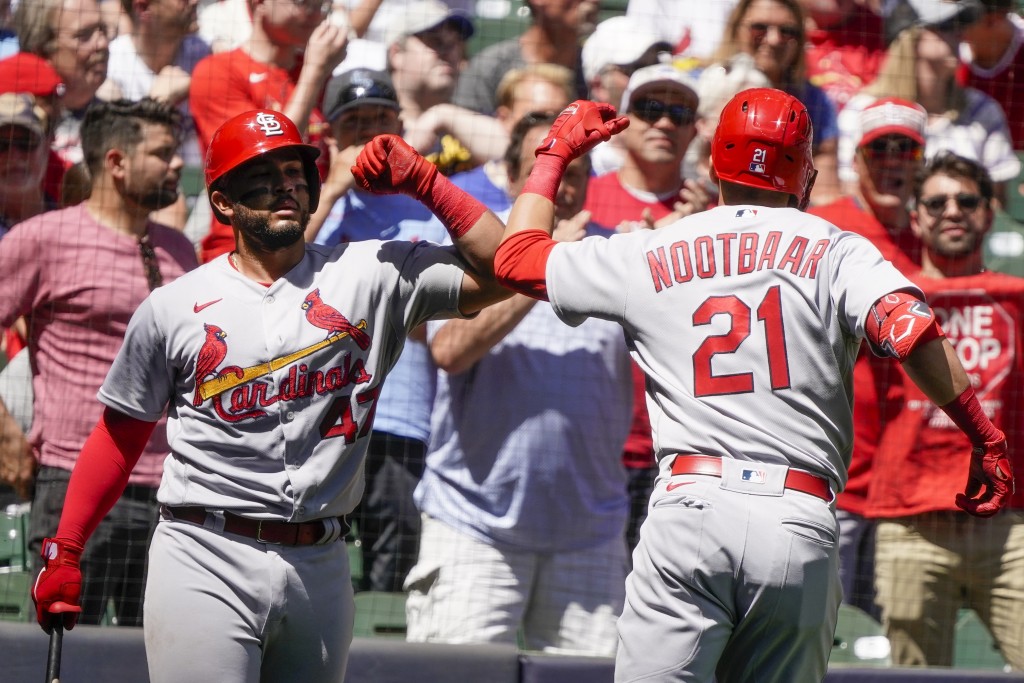 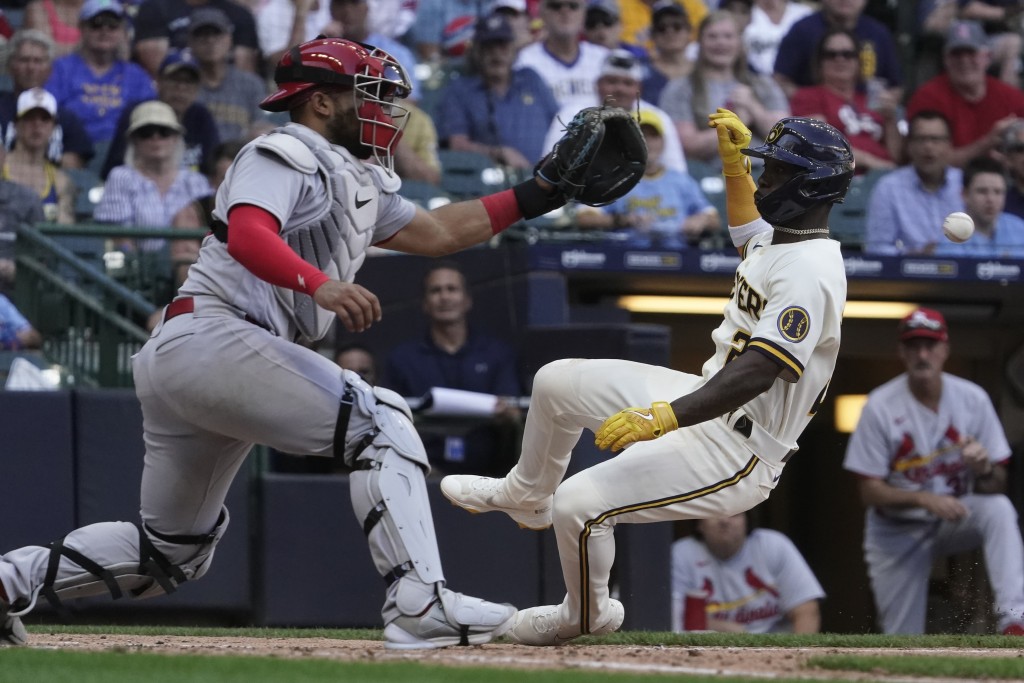 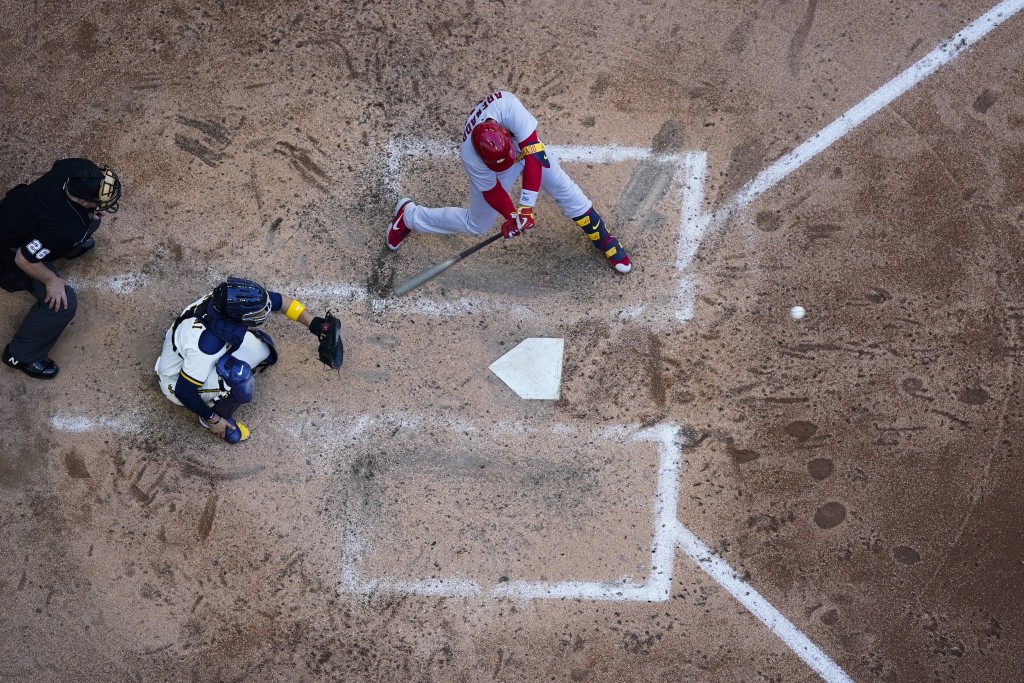 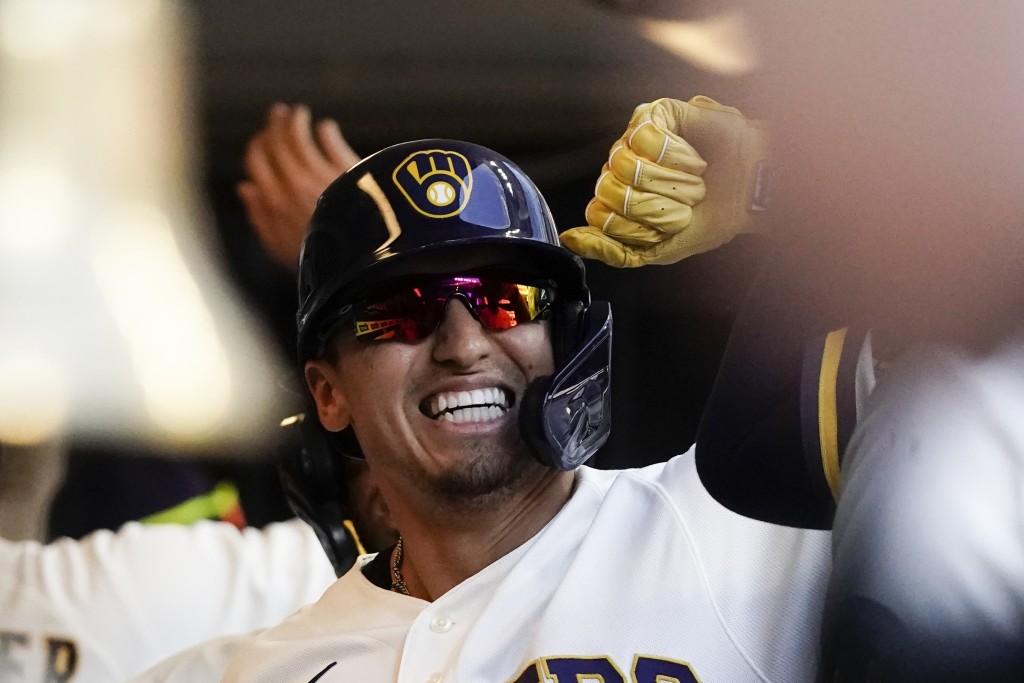 Taylor's drive to left field on a 2-1 sinker from Dakota Hudson (5-4) in the fourth inning gave the Brewers a 4-2 lead and snapped a streak of 46 1/3 innings without allowing a homer by the Cardinals right-hander.

Adames took Hudson deep leading off the fifth to make it 5-3.

“We stuck to it today,” Brewers manager Craig Counsell said. “You have to do everything right in these games to beat good teams. We did some things wrong today but we kept at it and did enough things right the last six innings to get a (victory).”

The Brewers, who have won five of seven, moved back into a first-place tie with the Cardinals atop the division. St. Louis has lost five of its last eight.

Jason Alexander (2-0) allowed four runs on six hits, working into the sixth inning while making his fifth start for a Brewers rotation that's been plagued by injuries.

Josh Hader breezed through the ninth for his 21st save in 22 chances.

Paul Goldschmidt doubled in a run for St. Louis and came around to score on Alexander's throwing error to make it 2-0 in the first inning. Alexander then allowed another double to Nolan Arenado and hit Brendan Donovan with a pitch before inducing an inning-ending double play from Juan Yepez.

Lars Nootbaar led off the fifth with a homer for the Cardinals. St. Louis again got within one run on Yepez's sacrifice fly in the sixth, but Milwaukee responded with Jace Peterson's sac fly in the eighth.

“It really wasn’t all that bad until a couple of poorly timed homers,” Hudson said. “That's what cost us the lead and we just never got it back.”

The St. Louis pitching staff allowed Milwaukee to load the bases with nobody out in the third, fourth and eighth innings.

“It’s just not competitive,” Cardinals manager Oliver Marmol said. “You can’t do that in the big leagues. It’s pretty simple.”

The Brewers and Cardinals have played three four-game series this season, all of which have finished in splits.

“It’s reflected in the 12 games we've played that we’re pretty evenly matched and it’s going to be tight all the way," Counsell said.

The teams will face off seven more times in 2022. They'll play three games in St. Louis from Aug. 12-14 and two more there a month later before wrapping up their regular-season series with two games in Milwaukee on Sept. 27 and 28.

The Cardinals are hoping OF Tyler O'Neill's time on the injured list will be short after an MRI revealed his strained right hamstring wasn't as serious as first thought. O'Neill, who also missed three weeks because of a shoulder injury earlier this season, was placed on the IL after suffering the injury running out a double last Sunday in Boston.

Brewers RHP Brandon Woodruff was scheduled to make a minor-league rehab start Thursday night at Class A Wisconsin. Woodruff was placed on the IL on May 30 with a right ankle sprain and has also battled Raynaud’s syndrome in his right hand. Infielder Mike Brosseau (right ankle) and right-handed reliever Trevor Gott (right groin) are also rehabbing with Wisconsin.

The Cardinals return home, where RHP Andre Pallante (2-2, 1.69 ERA) will take the mound Friday to open a three-game series against RHP Kyle Hendricks (2-6, 5.43) and the Chicago Cubs.

The Brewers continue their weeklong homestand Friday night with the first of a three-game series against the Blue Jays. RHP Adrian Houser (4-7, 4.24) gets the nod for Milwaukee while RHP Alek Manoah (8-2, 2.00) is scheduled to start for Toronto.