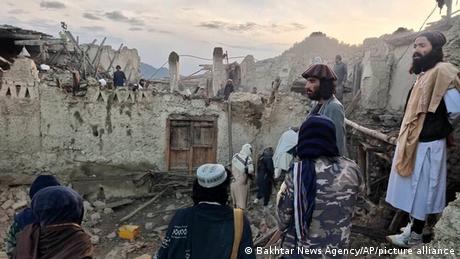 "Some 24 people were killed only in our area. All our houses have been destroyed. Our food items are buried under the debris. We need food and shelter urgently," Kowsar, a resident of the Gyan district in Afghanistan's Paktika province, told DW.

"Our district has been wrecked by the quake and the death toll is too high. Mass graves are being dug and bodies are being buried in them," he added.

Kowsar, who lost his father in the magnitude 6 earthquake, said that he woke up to strong jolts of the quake on Wednesday. "As I left my room, everyone was covered under the dust. We managed to evacuate my mother, younger brothers and sisters, but couldn't save my father."

He added that 12 members of his uncle's family were also killed and another eight wounded as a result of the powerful quake, which hit several Afghan provinces.

Hibatullah Akhundzada, the supreme leader of the Taliban and of the country, warned that the number of casualties, which is currently over 1,000, could rise.

"People are still trapped under the rubble," said Mohammad Amin Huzaifa, head of the Taliban's Information and Culture Department in Paktika.

Rescue efforts are underway in quake-hit areas but the difficult mountainous terrain has complicated the efforts, as many affected areas are not accessible by roads. Volunteers are working around the clock in a frantic effort to free people from the rubble of their homes.

Afghanistan lacks a proper disaster management mechanism, and with the departure of international aid organizations after the Islamist Taliban group seized power in August 2021, humanitarian assistance has become even more difficult.

Anas Haqqani, a senior Taliban official, said on Twitter that the government was "working within its capabilities."

"We can't reach the area, the networks are too weak, we're trying to get updates," Mohammad Ismail Muawiyah, a spokesman for the top Taliban military commander in Paktika province said, referring to the telephone networks.

Meanwhile, United Nations Secretary-General Antonio Guterres said the international organization has "fully mobilized" to assist with the deployment of health teams and supplies. Eight trucks of food and other necessities from Pakistan arrived in Paktika, according to the Taliban spokesman Zabihullah Mujahid.

The White House said in a statement that President Joe Biden is monitoring developments and had directed "USAID (US Agency for International Development) and other federal government partners to assess US response options to help those most affected."

Ahmad Tamim Azimi, a spokesman for the Ministry of Disaster Management for Afghanistan's previous government, says that disaster management is not a priority for the Taliban.

Azimi added that political and economic instability as well as the departure of trained and educated officials from Afghanistan have further undermined the country's capacities.

"If you put religious clerics in charge of technical departments, how can you expect to manage the crisis? It will only further push Afghanistan toward chaos," he told DW.

But Janat Fahim Chakari, an economic expert, believes that the Taliban legitimacy issue should not hinder the international humanitarian assistance for Afghanistan. "Had the earthquake hit the country during the tenure of former President Ashraf Ghani's government, the international community would not have any problem in providing aid. The humanitarian assistance, in my opinion, should not be politicized," Chakari told DW.

The earthquake will only exacerbate problems for common Afghans, who are suffering from hunger and poverty. Millions of Afghans are currently jobless, and their bank accounts are frozen. Many Afghans are selling their possessions to buy food, and urban communities are facing food insecurity on levels similar to rural areas for the first time.

In January, the United Nations made the "biggest-ever appeal" for humanitarian aid for a single country, saying it needed $4.4 billion (€3.9 billion) for Afghanistan to prevent the "world's most rapidly growing humanitarian crisis" from deteriorating further.

But the international community has been reluctant to hand over the funds directly to the Taliban, fearing that they would use the money to buy weapons. For the same reason, Washington has refused to unfreeze Afghanistan's bank assets.

The Wednesday quake has further exposed the issue of trust between Afghanistan's Islamist rulers and the West.

The Taliban have been desperately seeking legitimacy for their government. They have repeatedly urged the international community to recognize their rule. But now they see an opportunity in a crisis.

Bilal Karimi, a spokesperson for the Taliban, told DW that they have ordered all relevant government bodies to help the affected people and provide them with food and other essential items. "There is no obstacle for any aid organization [to work in Afghanistan], and the Taliban are also capable to deal with the situation," he said.

"The Islamic Emirate of Afghanistan has called on international aid organizations to help Afghanistan in this difficult time. Some countries have already sent aid, which is being distributed through the government," he added.

Former Afghan government official Ahmad Tamim Azimi, however, is skeptical of the Taliban claims: "They are still seeking international recognition. The country needs coordination and collaboration on different levels of the state, but the Taliban have no international legitimacy to do that. Afghanistan, thus, will face challenges in coping with the situation."

Azimi warned that if the issue was not managed quickly, Afghanistan would face catastrophic consequences. "It will affect the people, who could be used by terrorist organizations."