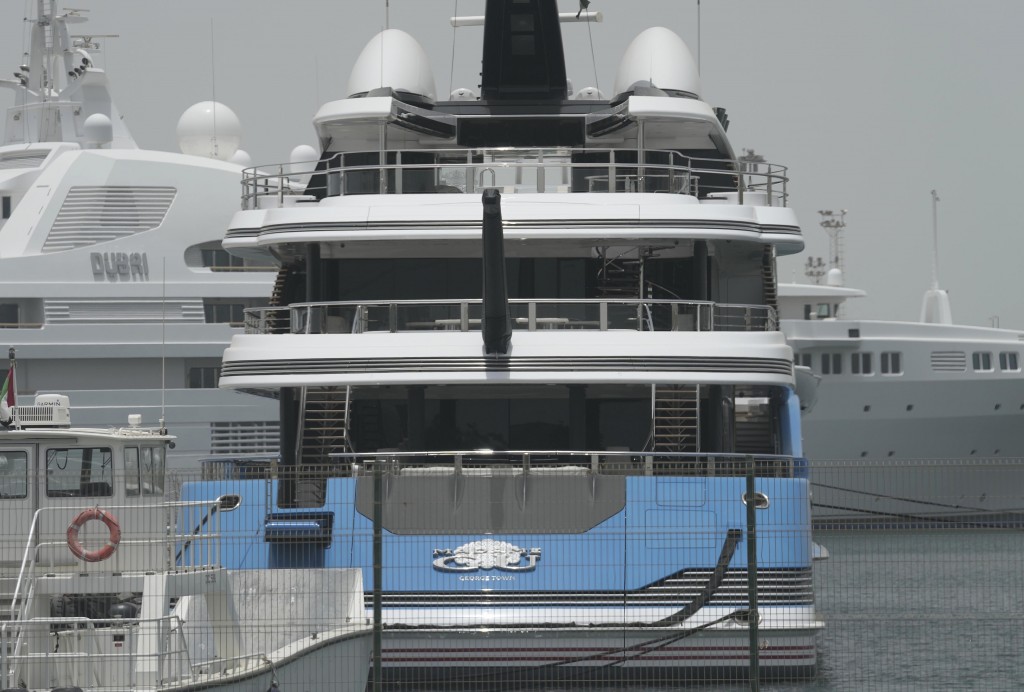 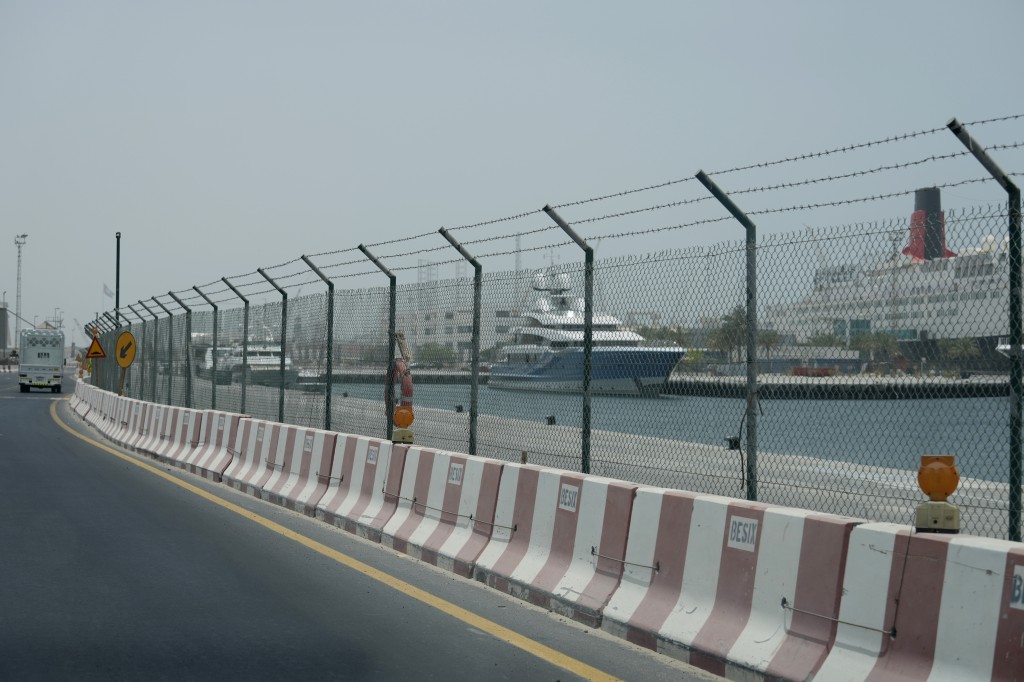 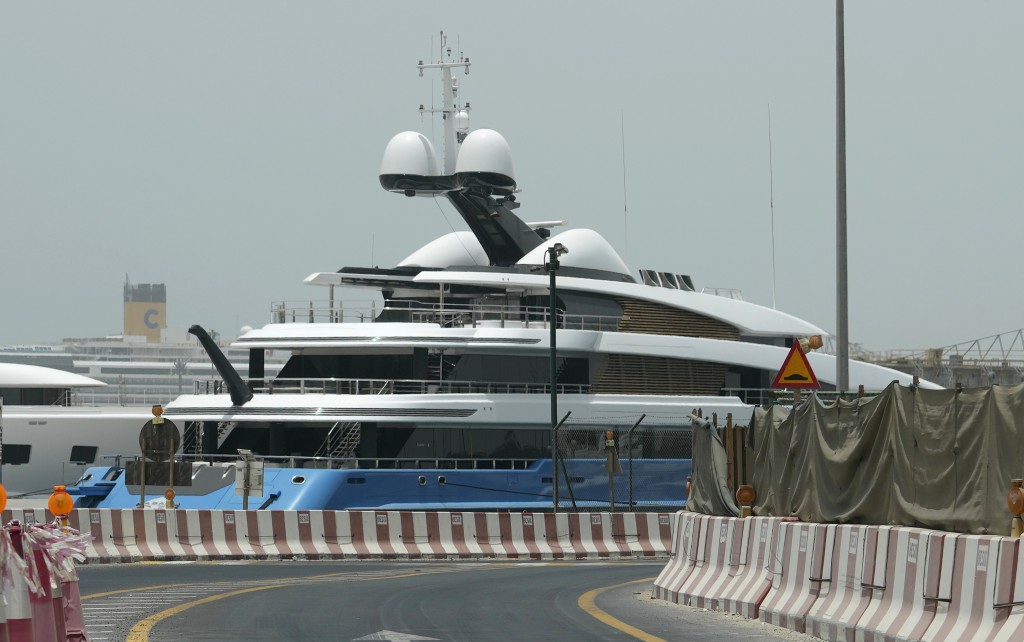 DUBAI, United Arab Emirates (AP) — A sleek $156 million superyacht belonging to a sanctioned Russian oligarch and parliamentarian is now docked in Dubai, the latest reminder of how the skyscraper-studded sheikhdom has become a haven for Russian money amid Moscow's war on Ukraine.

The 98-meter (324-foot) Madame Gu, which has a helicopter pad, gym, beach club and elevator, remained moored off Dubai's Port Rashid on Thursday in what has become a test for the close partnership between the United States and United Arab Emirates.

The vessel, with an eye-catching blue hull and $1 million annual paint job price tag, is owned by Andrei Skoch, one of the wealthiest men in Russia's Duma. A steel magnate, Skoch's fortune is valued at about $6.6 billion, according to Forbes. Attempts to reach Skoch for comment were not successful.

Like sanctioned Russian billionaire Andrey Melnichenko’s Motor Yacht A docked in the northern emirate of Ras al-Khaimah, the appearance of the Madame Gu in Dubai shows how Russian oligarchs have parked their assets in the UAE even as Western governments increasingly enforce sanctions and American pressure mounts on its Gulf Arab ally to follow suit.

The U.S. Treasury first sanctioned Skoch in 2018 over his role in government and alleged “longstanding ties to Russian organized criminal groups, including time spent leading one such enterprise.” Earlier this month, the Treasury designated the Madame Gu, along with its helicopter, barring American entities from conducting business with the superyacht. Skoch is also sanctioned by the European Union.

The Madame Gu, registered in the Cayman Islands, flew an Emirati flag on Thursday when Associated Press journalists observed the ship — a show of wealth dramatic enough to rival the Dubai’s famed Queen Elizabeth 2 cruise ship-turned-hotel floating just beside it. It also was moored just next to the $200 million megayacht Dubai, owned by the city-state's ruler, Sheikh Mohammed bin Rashid Al Maktoum.

Satellite photos from Planet Labs PBC show the Madame Gu at its berth at Port Rashid beginning from March 25.

The UAE, home to glitzy Dubai and oil-rich Abu Dhabi, has declined to take sides in Moscow's war and welcomed the influx of Russian money to its beach-front villas and luxury hotels. The UAE's Foreign Ministry did not immediately respond to a request for comment.

The invasion of Ukraine sent Russia’s richest businessmen and politicians scrambling to save their significant assets from what became a widening dragnet. Superyachts tied to Russian oligarchs have taken on outsized significance in the Western crackdown that aims to exert pressure on President Vladimir Putin to change course in Ukraine.

Authorities across Europe and elsewhere have seized yachts owned by sanctioned Russian billionaires on a U.S. sanctions list. Earlier this month for instance, the U.S. won a legal battle in Fiji to confiscate a $325 million Russian-owned superyacht.

Other U.S. allies, including Germany, the United Kingdom, France and Italy, are involved in trying to collect and share information with Washington against Russians targeted for sanctions, the White House says.

One of a shrinking number of countries where Russians can still fly directly, the UAE has chosen not to impose sanctions on Moscow or freeze the assets of Russian billionaires relocating to the emirate.

An apparent influx of superyachts and private planes tied to Russian's wealthy so far have avoided scrutiny in a country that has long been a magnet for foreign money — legal and otherwise.

But their increasingly visible presence appears to be frustrating Washington.

This month, a U.S. court ordered the seizure of two aircraft worth over $400 million believed to be owned by sanctioned Russian oligarch Roman Abramovich. The former Chelsea soccer club owner’s Boeing 787 Dreamliner is now in the UAE, the court filing said.

In a House hearing Wednesday, U.S. Assistant Secretary of State for Near Eastern Affairs Barbara Leaf acknowledged the UAE had become a safe haven for Russian oligarchs linked to Putin.

“I’m not happy at all with the record at this point and I plan to make this a priority to drive to a better alignment, shall we say, of effort,” said Leaf, who once served as an ambassador to the UAE.

Deputy Treasury Secretary Wally Adeyemo, one of the main U.S. coordinators on the Russian sanctions strategy, visited Dubai and Abu Dhabi to meet with Emirati financial officials this week.

During a banking round table, he pleaded for increased vigilance.

“Despite this commitment (to prevent money laundering), the UAE — and other global financial hubs — continue to face the threat of illicit financial flows," he said, according to readout from the Treasury Department.

Adeyemo warned of challenges that have emerged amid the war on Ukraine “for both governments seeking to hold Russia accountable and for financial institutions like yours that are responsible for implementing the financial sanctions we impose.”