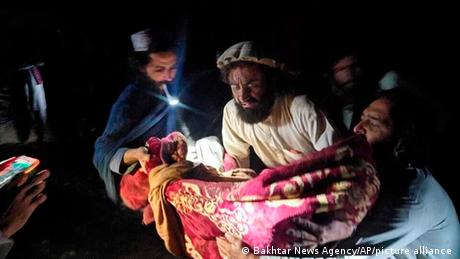 Rescuers in eastern Afghanistan have been working around the clock in a frantic effort to free people from the rubble of their homes after a powerful earthquake killed at least 1,000 people in the mountainous border region.

Desperate survivors and rescue workers dug through debris with their bare hands without heavy equipment, as poor communications and a lack of proper roads hampered rescue efforts.

The magnitude 6 quake, centered in Paktika province, struck in the early hours of Wednesday.

The tremors were felt as far as 480 kilometers away in Lahore, Pakistan. It hit at a depth of 10 kilometers (6 miles), according to the United States Geological Survey.

According to state media, an estimated 1,500 people have been injured and thousands of structures have been destroyed. Afghanistan's leader, Hibatullah Akhundzada, warned that the number of casualties could rise.

"People are still trapped under the rubble,” said Mohammad Amin Huzaifa, head of the Information and Culture Department in Paktika.

The disaster presents a particular challenge to the Taliban government, which has largely isolated the country since it took power last August. The departure of many international aid agencies from Afghanistan since then only presents more challenges.

Despite the frequency of natural disasters in Afghanistan, the emergency response teams were ill-equipped even before the Taliban takeover. Since then, only a few airworthy planes and helicopters remain, limiting current rescue efforts.

Anas Haqqani, a senior Taliban official, said on Twitter that the government is "working within its capabilities."

"We can't reach the area, the networks are too weak, we're trying to get updates," Mohammad Ismail Muawiyah, a spokesman for the top Taliban military commander in Paktika province said, referring to the telephone networks.

Meanwhile, United Nations Secretary-General Antonio Guterres said the international organization has "fully mobilized" to assist with the deployment of health teams and supplies. Eight trucks of food and other necessities from Pakistan arrived in Paktika, according to the Taliban spokesman Zabihullah Mujahid.

The White House said in a statement that President Biden is monitoring developments and had directed "USAID (US Agency for International Development) and other federal government partners to assess US response options to help those most affected."

Afghanistan is frequently hit by earthquakes, especially in the Hindu Kush mountain range, which lies near the juncture of the Eurasian and Indian tectonic plates.

Twin quakes in the western province of Badghis in January this year killed dozens of people. Afghanistan's deadliest earthquake in recent times was in May 1998 in the northeastern provinces of Takhar and Badakhshan which killed 5,000 people.

The latest disaster only adds to the dire situation facing the country, where millions face hunger, poverty and a crumbling health system.

"We ask from the Islamic Emirate and the whole country to come forward and help us,” said Hakimullah, a survivor. "We are with nothing and have nothing, not even a tent to live in.''