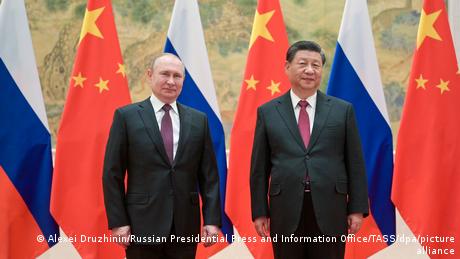 Russian President Vladimir Putin said Wednesday that Moscow was in the process of redirecting its trade and oil exports to BRICS countries as a result of Western sanctions.

The BRICS group comprises Brazil, Russia, India, China and South Africa. Their economies account for more than 40% of the global population and nearly a quarter of the world's gross domestic product.

After the Russian invasion of Ukraine on February 24, the West imposed sweeping sanctions on Russia, including restrictions on imports of its oil.

In order to weather the sanctions, Russia is trying to forge closer ties with Asia to replace the markets it lost in the EU and the US.

Russian oil for China and India

Speaking via video link at the opening of a BRICS business forum, Putin denounced "the permanent implementation of new politically motivated sanctions" that contradict "common sense and basic economic logic."

"Businessmen of our countries are forced to develop their business under difficult conditions where Western partners neglect the basic principles of market economy, free trade, as well as the inviolability of private property," the Russian president said.

He called for strengthening ties within the group. According to Putin, Russia was discussing increasing the presence of Chinese cars on the Russian market as well as the opening of Indian supermarket chains.

"Russian oil deliveries to China and India are increasing. Agricultural cooperation is developing dynamically," as is the export of Russian fertilizer to BRICS countries, he said.

Russia is also developing "alternative international transfer mechanisms" with BRICS partners and an "international reserve currency" to reduce dependence on the dollar and euro, Putin added.

Three of the group members — China, India and South Africa — abstained from voting on a United Nations resolution condemning the Russian invasion of Ukraine.

How China sees the war in Ukraine

The conflict in Ukraine has "sounded an alarm for humanity," Chinese leader Xi Jinping said in his speech at the opening of the forum, as China continues to assume a position of neutrality while backing its ally Russia.

"Countries will surely end up in security hardships if they place blind faith in their positions of strength, expand military alliances, and seek their own safety at the expense of others," Xi said to the forum via video link.

"History has shown that hegemony, group politics and confrontations between blocs bring neither peace nor stability, but war and conflict," he said.

In other comments, Xi said imposing sanctions could act as a "boomerang" and a "double-edged sword," and that the global community would suffer from "politicizing, mechanizing and weaponizing" global economic trends and financial flows.

China has refused to criticize Russia's war in Ukraine or even to refer to it as an invasion in deference to Moscow, while also condemning US-led sanctions against Russia and accusing the West of provoking Moscow.

The leaders of Brazil, Russia, India, China and South Africa are scheduled to meet on Thursday by video. The summit is chaired this time by China.