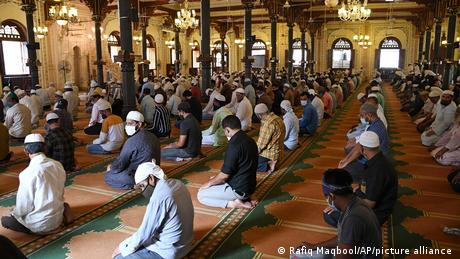 There is currently a debate about the centuries-old Gyanvapi mosque in Varanasi, one of Hinduism's holiest cities, stoking fresh tensions between India's two largest religious communities.

Hindu groups say the mosque, located in the constituency of Prime Minister Narendra Modi, was built after a temple at the site was demolished by Muslim rulers in the 17th century.

After five women sought permission to perform Hindu rituals in a part of the mosque, a local court ordered authorities to do a video-recorded survey of the premises.

Last month, reports claimed the survey had discovered a shivalinga, a stone shaft that is a representation of the Hindu god Shiva, at the site, a claim that has been rejected by the mosque authorities.

The court then banned large Muslim gatherings at the mosque, but India's Supreme Court later overturned the ruling.

Muslims in India now fear that the ruling Bharatiya Janata Party (BJP) activists could lay similar claims to other mosques and forts that were allegedly built on temple sites in other parts of the country.

Last month, S Eshwarappa, a former deputy chief minister of Karnataka state, claimed that at least 36,000 temples were destroyed to build mosques during the time when Muslim emperors ruled India. He said that they would all be reclaimed legally.

Right-wing Hindu groups are demanding that the authorities carry out surveys of several mosques to determine whether they were built on temple sites.

Last month, members of the Hindu Narendra Modi Vichar Manch forum sought permission from the BJP government in Karnataka to pray at the 200-year-old Jamia Masjid in Srirangapatna, which they claim was sitting atop the ruins of a temple.

Another radical Hindu outfit claimed that 27 Hindu temples were demolished to build the Qutub Minar, the famous 13th-century minaret in Delhi and a UNESCO World Heritage Site.

"There is no doubt that these temples were demolished in the past. They must be rebuilt, and Hindus should be allowed to offer prayers there," Vinod Bansal, a spokesman for the Vishwa Hindu Parishad organization, told DW.

"For how long can we tolerate this injustice?" Bansal added.

Other Muslim sites that Hindu groups lay claim to include the Akbar Fort in Prayagraj (formerly known as Allahabad), the Bhojshala in the Madhya Pradesh state and Adina Mosque in the West Bengal state.

Amid this controversy, historian Sita Ram Goel's book Hindu Temples: What Happened to Them, which was published in 1990, has become popular in India. According to Goel, over 1,800 Muslim structures in the country were either constructed on temples or were built with materials from destroyed temples.

A threat to Indian secularism

Communal tensions have spiked in India since Modi came to power in 2014. Many Muslims see the attempts by Hindu extremist groups to "reclaim temples" as a part of the BJP's anti-minority policies.

"We won't allow them [right-wing Hindu groups] to hurt us anymore. It's our responsibility to protect our mosques," Asaduddin Owaisi, president of the All India Majlis-e-Ittehadul Muslimeen organization, told DW.

Owaisi said any place of worship that existed on August 15, 1947, India's Independence Day, could not be changed according to the Places of Worship Act, passed by the South Asian nation's Parliament in 1991. He said the law was passed to preserve India's secular character and prevent communal conflicts.

"In their aggressive pursuit of Hindu supremacy, they [Hindu groups] are bringing up one issue after another. Laying claim to 3,000 mosques is one of them," Zafarul Islam Khan, the editor of The Milli Gazette and the former chairman of the Delhi Minorities Commission, told DW, adding that these attempts are a threat to India's secular and democratic social fabric.