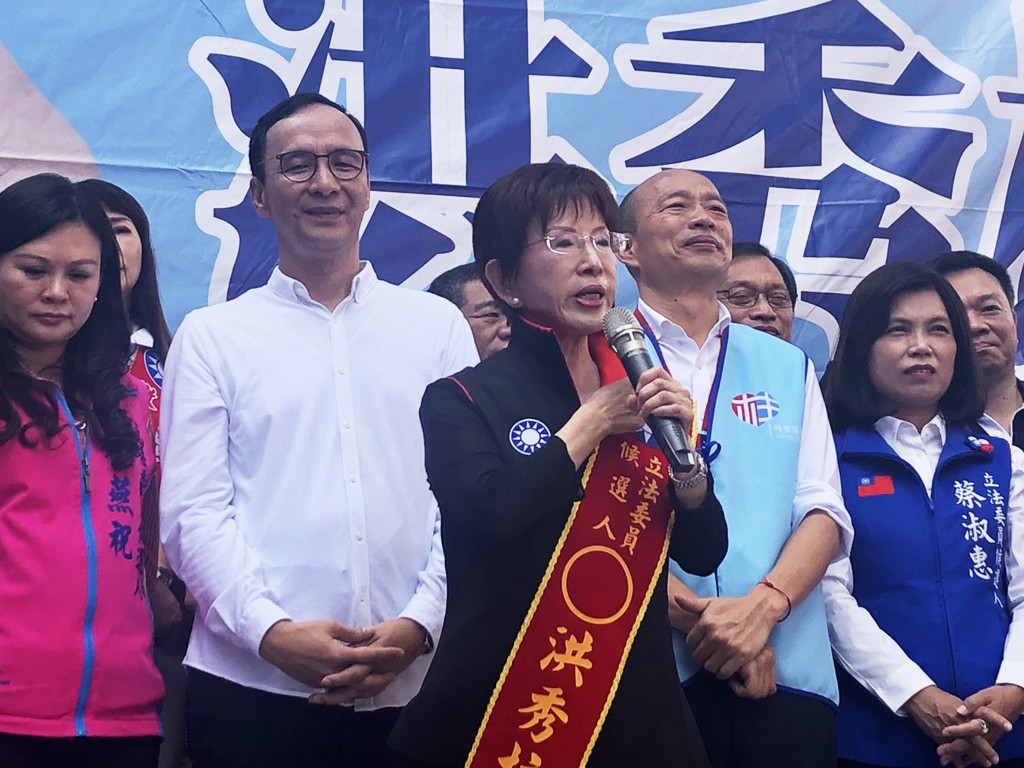 This is part five in a series on what Americans need to know about the KMT following Eric Chu’s visit and the re-opening of the KMT Washington office. Part one “What Americans need to know about KMT past” is here, part two “When pro-China elements took over the KMT” is here, part three “KMT's pro-US pivot on very wobbly foundations” is here and part four “How pro-China is the KMT now?” is here.

TAICHUNG (Taiwan News) — Is Kuomintang (KMT) Chair Eric Chu’s (朱立倫) recent push to re-position his party as being pro-U.S., anti-Communist, and not pro-China for real? The Taiwanese public does not believe so.

As explained in previous articles in this series, there are elements in the party that are pro-unification with China, but the party for most of this century has been closer to China. This new pivot to a pro-U.S. and not pro-China stance could be at risk of only lasting as long as Eric Chu remains the party chair.

Chu is a relatively weak party chair, and his popularity has been plunging.

If the KMT does not do well in this year’s local elections, Chu will be under pressure to resign. If he survives, and the party does well in the national elections in 2024, then this new policy has a chance to succeed at becoming party orthodoxy, but for now it is primarily on Chu’s shoulders.

How seriously does Chu himself take this pivot? Prior to last year, he never talked in such strong terms about the U.S. or China, preferring to take bland stances that revealed little about his thinking.

It’s not even clear he personally had a definite stance on these issues or even necessarily does now. He is known as a pragmatist with an eye on winning elections, and he knows his party’s ideology of being pro-unification (even if in the distant future), supporting the "one China" principle, and continuing to support the 1992 consensus are deeply unpopular with the voting public.

While we cannot absolutely rule out his personally supporting this new pivot, we can be certain that he has his eye on the electability of his party. After losing two national elections in a row in landslides, he is well aware of the toxic effects of the party’s ideology at the ballot box.

It appears to have helped already, with the aforementioned TPOF poll showing a nearly 4% jump in popularity over the last month, which is when Chu made his charm offensive trip to America. However, at 18%, it still trails the ruling Democratic Progressive Party’s (DPP) nearly 33% support by a large margin.

The first time Chu began to take a new, strong public stance was during the campaign for KMT party chair last year. During the second debate, he broke with his usual “all things to all people” style and made a strong case for why he, and only he, was the one who would defend the Republic of China (ROC) and hold off the “red unificationists” like his hardline pro-unification challenger Chang Ya-chung (張亞中) and save the nation from being annexed by China.

Chu even went so far as to say he would insist on using the KMT’s version of the 1992 consensus with China’s General Secretary Xi Jinping, which is “there is one China, with each side having its own interpretation.” The Chinese side has never accepted the second half of that, just that it means “one China.”

Right after winning the chair election, China’s Xi sent a congratulatory message. This clearly indicates that, unlike Chu’s predecessor Johnny Chiang (江啟臣) who got no such message, the CCP did not consider Chu a problem for them.

This should raise some (ahem) red flags considering what he said during the debate. Even the light blue pro-U.S. Chiang did not sound vehement about staving off annexation by China, but somehow the CCP hated Chiang and to this day has been muted in their treatment of Chu.

Within hours, Chu had sent his response. From the timeline, it is unclear if he had advance notice of Xi's message or simply expected it, but it is fairly certain that Chu had already prepared it.

Xi’s message included: “At present, the situation in the Taiwan Strait is complex and grim,” calling for unity among “all Zhonghua (中華, ethnic Chinese) sons and daughters” and expressing the hope that the two parties will work together to “seek peace for the Taiwan Strait, seek reunification for the country and seek rejuvenation for the nation.”

“In the past three decades, between our two parties cross-Strait relations through multi-level exchanges and cooperation at all levels yielded beneficial progress. In recent years, however, the DPP administration has changed the status quo across the Strait by adopting ‘desinification’ and ‘anti-China’ policies. That created a tough situation across the Strait and an extreme sense of insecurity among the people across the Strait”

“People on both sides of the Strait are the descendants of Yan and Huang (IE Chinese people). On the basis of the ‘1992 consensus’ and ‘opposing Taiwan independence,’ we hope from now on that our parties can pursue consensus and respect differences, promote mutual trust and integration, enhance exchanges and cooperation, so that the peaceful development of cross-Strait relations can move forward. This is beneficial to the people across the Strait and the promotion of peace and stability across the Taiwan Strait.”

While in diplomatic messages one expects politeness, this went well beyond and contains some elements that do not seem to line up at all with Chu’s recent anti-Communist and not pro-China comments. It also reads like it is right out of former President Ma Ying-jeou’s (馬英九) playbook, who, in a previous column I noted, was trying to lay the groundwork for eventual unification.

That is normally how one would translate it, or something similar, but there is a slippery word in there: 同. While it is not the same character that is usually used for unification (統) it carries a similar meaning, and so it could be interpreted as meaning something like “pursue unification.”

That appears to be how the TAO took it. Specifically referring to that line, TAO spokesperson Zhu Fenglian said at a press conference: “Regarding the differences between the two sides of the Strait, the Chinese side is willing to hold dialogue under the 'one China' principle to seek the path to resolution.”

Also note, that almost right out of the gate, Chu blames the DPP and praises cooperation with the Chinese Communist Party. He accuses the DPP of changing the status quo in the Taiwan Strait, echoing China’s stance, in spite of it being China that has been aggressively changing the situation.

The letter clearly reads like his fellow Taiwanese compatriots in the DPP are more of an enemy than the CCP.

Think through the message that sends to the Taiwanese about where his priorities are on defending their freedoms, independence, and way of life. He’s saying to the Taiwanese public he is more interested in working with a brutal, genocidal, and increasingly Orwellian party-state bent on annexing Taiwan than with the democratic government the Taiwanese themselves elected.

This seemingly contradicts Chu’s claims to American and domestic audiences that he and the KMT are “anti-Communist” and “not pro-China.”

With those claims now looking less than solid, what about his “pro-U.S.” comments?

Chu studied in America, and may well be pro-U.S. As this series has repeatedly noted, there are many in the KMT who view being pro-U.S. as a good thing.

However, if his “anti-communist” and “not pro-China” stances are not as solid as they look, if he has to choose between standing by the U.S. or by China, which way will he choose? He might choose the U.S. side, but no one should feel absolutely certain about that.

This is something his American audiences and Taiwan voters should keep in mind.