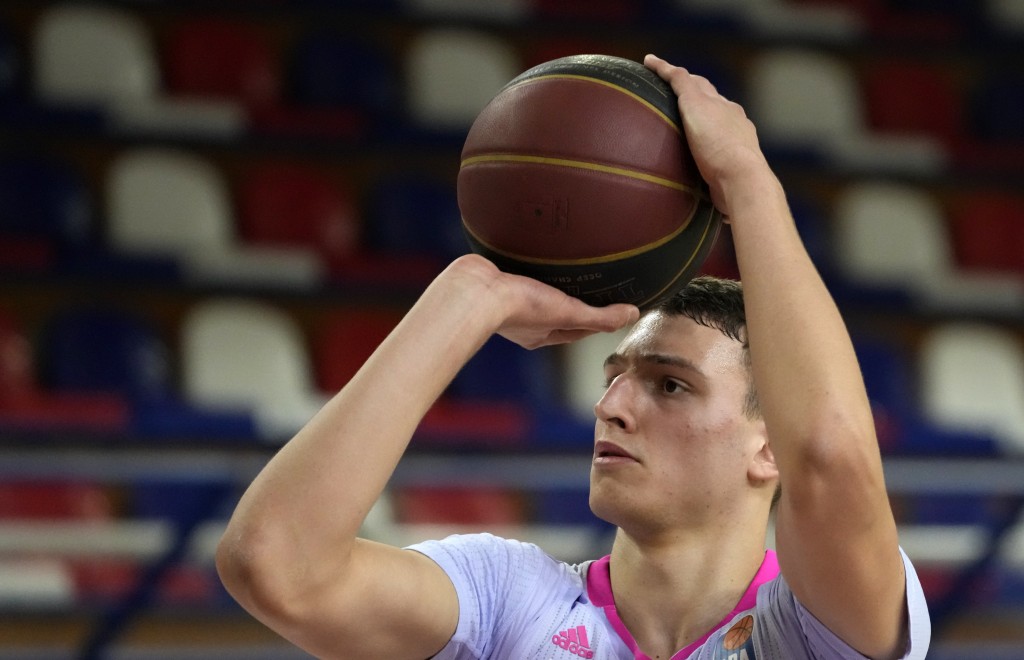 LONDON (AP) — Ousmane Dieng of France moved to Australia for a season to hone his skills. Nikola Jovic stayed home in Serbia.

Both are expected to end up in the NBA, though, since they are among the top international prospects in Thursday night's draft.

Both are versatile 6-foot-10 wings who only recently turned 19 years old after completing their first professional season.

Dieng played for the New Zealand Breakers in Australia's National Basketball League as part of its Next Stars program, which has become a hotspot for NBA prospects. Jovic was voted top prospect in the ABA League after his first full season for Belgrade club Mega, which produced reigning NBA MVP Nikola Jokic.

Here’s a look at some of the top international players in the draft:

STRENGTHS: Multi-faceted scorer with court vision and playmaking skills. He averaged 11.7 points, 4.4 rebounds and 3.4 assists this season and shot 36.5% from 3-point range.

Jovic told The Associated Press he had worked out for the Houston Rockets, San Antonio Spurs — as of Monday both teams had three first-round picks — the Denver Nuggets (the 21st and 30th selections), the Chicago Bulls (No. 18), the Minnesota Timberwolves (No. 19), and the Milwaukee Bucks (the 24th pick). He also had workouts scheduled with the Miami Heat, who have the 27th pick, and the champion Golden State Warriors (No. 28).

“My basketball IQ is really good, shooting-wise I’m really good, also passing. Those are things I can immediately translate to the NBA,” Jovic said.

CONCERNS: Jovic doesn't possess an explosive first step. Entering the season at 200 pounds, there were also concerns about his strength, but he has bulked up and now weighs 224 pounds.

“I’m working on my whole body. Core stability is really important for me,” said Jovic, who turned 19 this month.

Rafael Barlowe, director of scouting at NBA Big Board, said Jovic projects as “a league-average defender” and said the right fit will be vital: “He could end up in a bad situation like Deni Avdija (Washington Wizards) on team where he doesn’t have the opportunity to handle the ball and he’s stuck in a corner.”

The lanky Frenchman recovered from a slow start in Australia to show flashes of why he could be a potential lottery pick.

STRENGTHS: Perimeter skills, playmaking potential, can defend multiple positions. He averaged 8.9 points, 3.2 rebounds and 1.1 assists per game. His 3-point shooting percentage was in the single digits early, but over the final 12 games of the season it was 35%.

“I just needed to find my rhythm and kept working on my game,” he said.

Dieng worked out with “a lot” of teams but declined to name them.

“I can fit in any team because I’m pretty versatile, so I can do whatever the coach wants me to do,” he said. “I’m a pretty hard worker and really versatile with good vision and can do everything on the floor.”

CONCERNS: Shooting consistency and frame. He needs to add bulk. At 215 pounds, he’s about 10 pounds heavier than early in the season, when he sometimes looked lost.

“The gap between third division in France and the NBL is really big. Everything is quicker and everything is more physical,” he said, adding that playing among former NBA players “was really good for me.”

Some other internationals with no U.S. experience:

— ISMAEL KAMAGATE: A 6-11, 230-pound center for Paris Basket. The 21-year-old Frenchman averaged 11.8 points, 6.3 rebounds and 1.5 blocks per game. He rejected nine shots in a game against Roanne. French league all-star.

— GABRIELE PROCIDA: An athletic 6-7 Italian who shot 38.3% from behind the arc for Bologna.

The 7-foot-3 Victor Wembanyama of France might have been this year's top pick — possibly last year's too. The 18-year-old will finally be eligible in 2023.

With his size and skills — ball-handling, shooting, rim protection — Wembanyama is considered a generational talent. He finished with 22 points, eight rebounds and eight blocks against a stacked United States team that included Chet Holmgren in the final of the FIBA Under-19 World Cup last July. He plays for ASVEL, the French team owned by Tony Parker.

“If he maximizes all of his gifts," Barlowe said, “he could easily be one of the best players in his generation.”