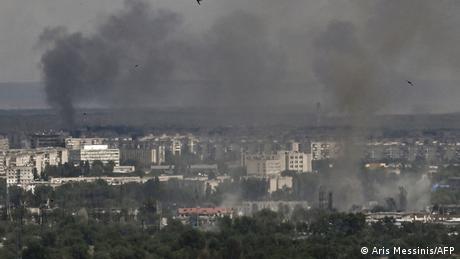 This story was last updated at 02:05 UTC/GMT

Danish Energy Agency deputy director Martin Hansen said that "this is a serious situation we are facing and it has been exacerbated by the reduction in supplies." Currently Denmark's stocks are around 75% full.

Danish energy company Orsted announced at the end of May that delivery of Russian gas would be suspended after June 1, after the company refused to settle the payment in rubles as Moscow had requested.

Russian troops have entered the industrial part of Sievierodonetsk, according to Luhansk regional governor Serhiy Haidai.

The Azot chemical plant is the only part of the besieged city that remains under Ukrainian control.

Ukrainian Deputy Prime Minister Iryna Vereshchuk said that there are around 300 civilians sheltering in the Azot plant.

Yesterday, Kyiv conceded that it had lost control of Sievierodonetsk suburb Metiolkine.

Muratov is the editor-in-chief of independent newspaper Novaya Gazeta.

The proceeds from the auction will go to UNICEF's Humanitarian Response for Ukrainian Children Displaced by the War, according to Heritage Auctions.

Muratov won the prize in 2021 for his "efforts to safeguard freedom of expression."

Foreign policy adviser to Ukrainian President Volodymyr Zelenskyy, Ihor Zhovka, told DW that Kyiv's expectations as to whether Ukraine will be conferred EU candidate status are now more positive than several days ago, following the recommendation of the European Commission.

Zhovka said that if Ukraine achieves candidate status it will have done so at "record high speed."

"We are willing to make further reforms despite the war, and especially after we win the war," he said.

What happened in Russia's invasion of Ukraine on Monday

Hungary proposed its territory as a possible route for Ukrainian grain exports.

The head of Russian-occupied Crimea said Ukraine had fired at oil drilling platforms off the coast of the peninsula.

Ukrainian President Volodymyr Zelenskyy vowed to take back areas of southern Ukraine that are currently under Russian occupation.

China's crude oil imports from Russia increased 55% in May compared to a year earlier.

Russia said that its forces have seized the village of Metiolkine near Sievierodonetsk in the Luhansk region.

Germany seized Russian-owned properties under sanctions, in the first case of its kind.

You can revisit our updates from Monday here.