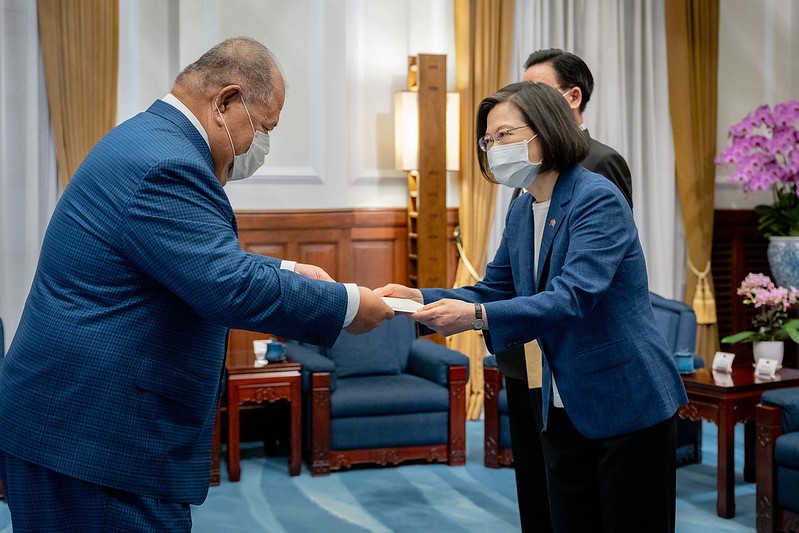 Tsai pointed out in a speech that Tuvalu was the first country to establish diplomatic relations among Taiwan's Pacific allies. She said that she witnessed firsthand the results of cooperation between the two countries when she visited Tuvalu in 2017, adding that the warm hospitality of the Tuvaluans impressed her very much.

Tsai said that Taiwan and Tuvalu are both maritime countries known for their warmth and kindness and share the universal values of democracy and freedom. Tuvalu has “long spoken up” for Taiwan in the international arena and supports Taipei's participation in the World Health Assembly, the United Nations Framework Convention on Climate Change, and other international organizations, the president said.

Tsai said both countries have continued to deepen cooperation in the fields of agricultural technology, talent cultivation, clean energy, and public health and medicine, in recent years. The countries have also jointly taken on the challenges of climate change, and are striving to achieve the UN Sustainable Development Goals, she said.

The two nations supported each other during the pandemic, bolstering Tuvalu's pandemic response as well as Taiwan’s medical cooperation programs, Tsai said.

Tsai noted that Paeniu has served as the prime minister of Tuvalu three times in the past and praised his rich political experience and familiarity with bilateral relations. She said with Paeniu's assistance, “Taiwan and Tuvalu will come to enjoy even closer cooperation and exchanges.”

Paeniu said he witnessed the development of bilateral relations during his ten years as prime minister. He said he is grateful that, after leaving office in 2006, he still sees continuous support and assistance from Taiwan.

The ambassador said that his major responsibility was to continue the friendship between the two nations. Although the financial support that Tuvalu can provide is not as large as that of Taiwan, what it can give Taiwan in return is the highest level of trust and loyalty, he said.

Paeniu added that he hopes cooperation between the two countries will continue to progress.