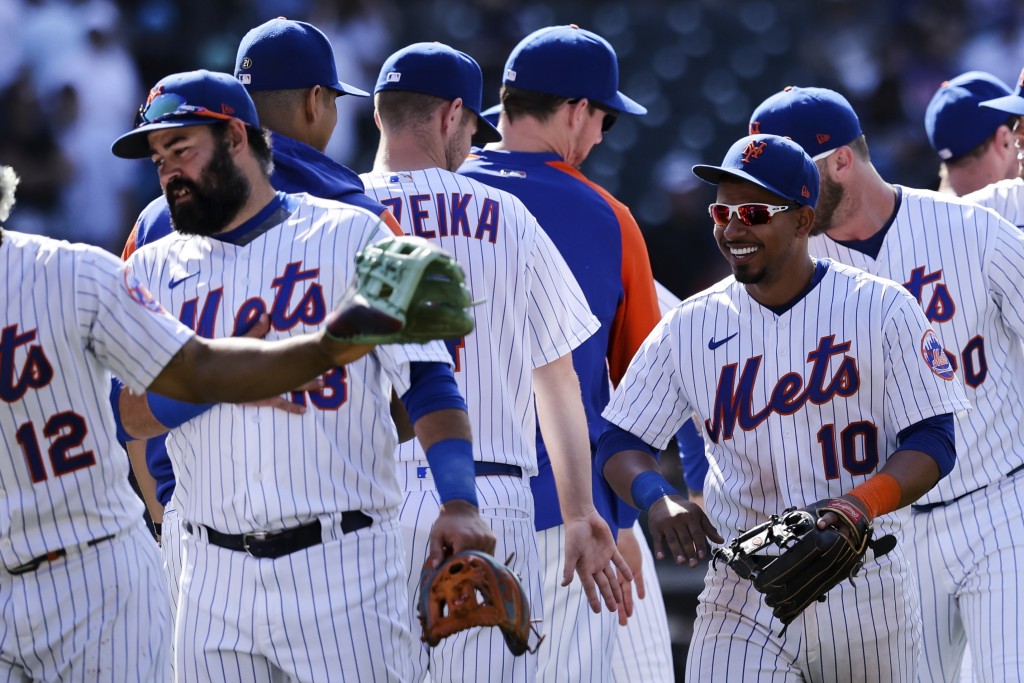 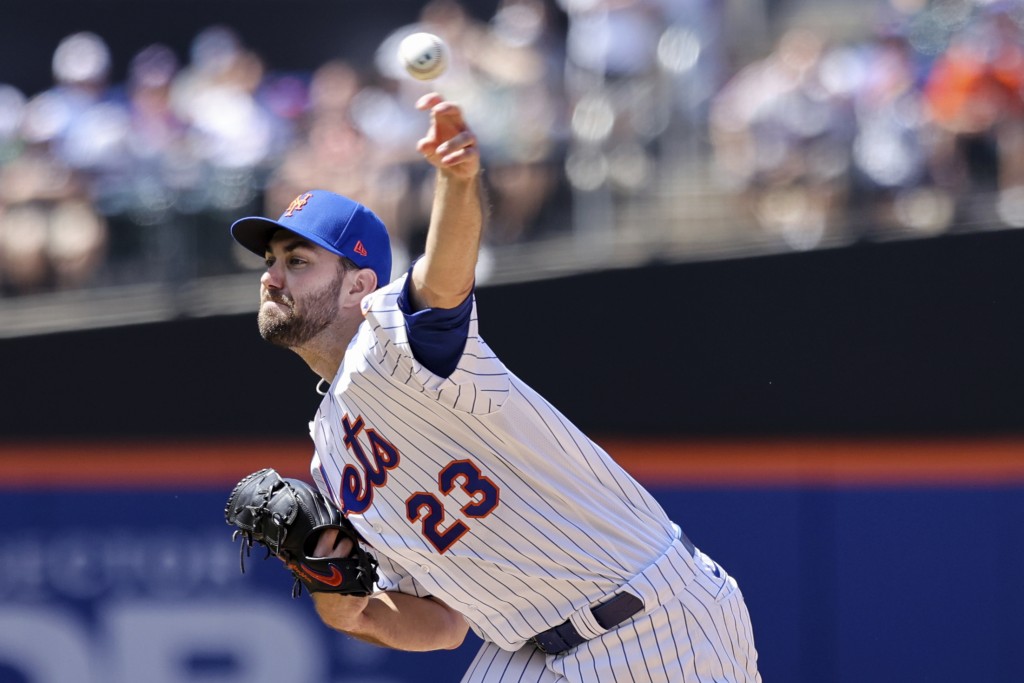 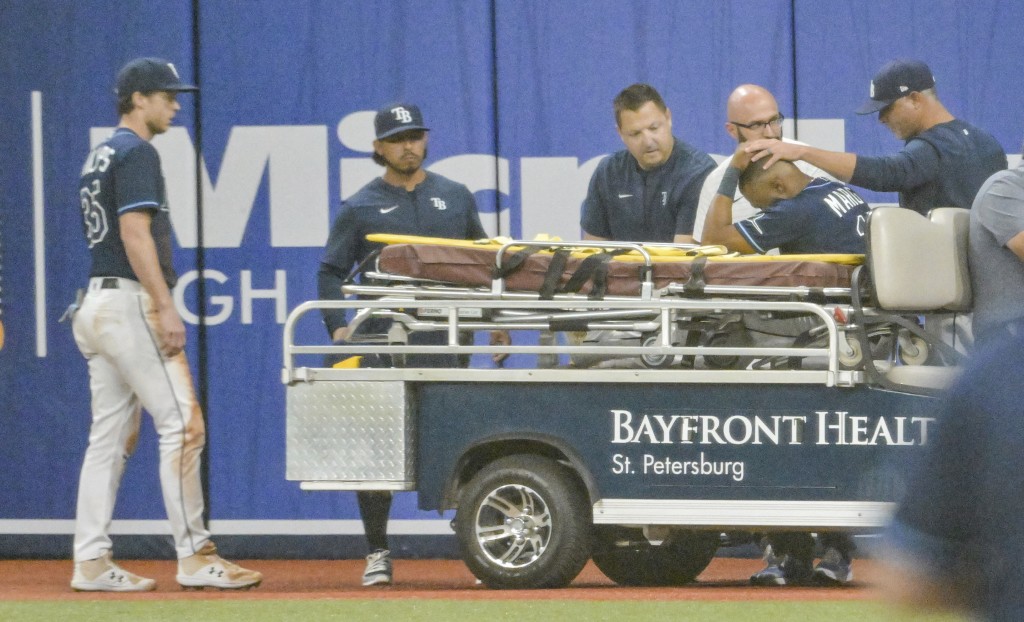 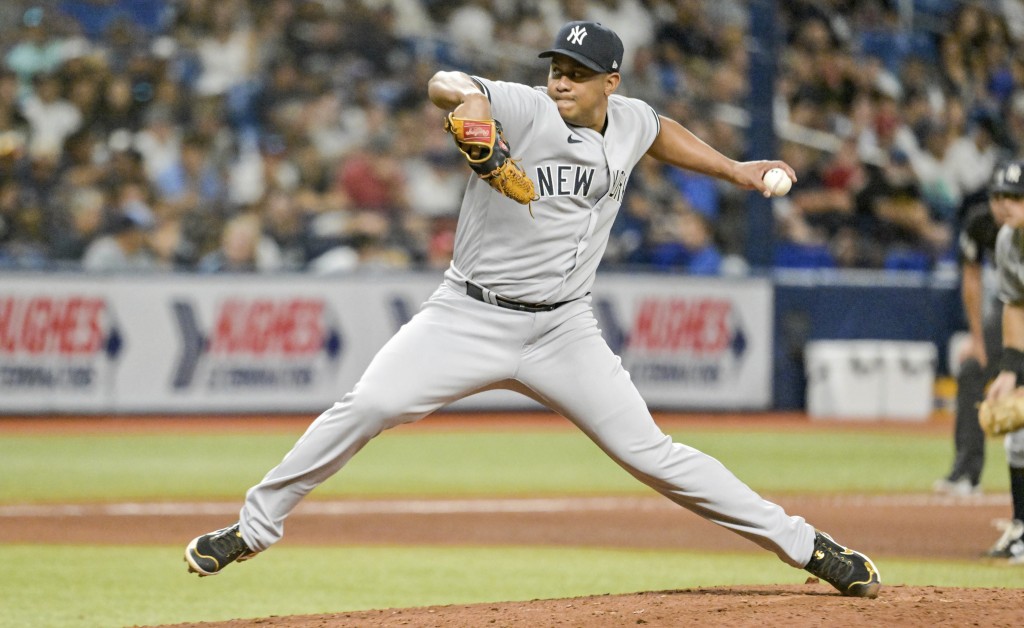 ST. PETERSBURG, Fla. (AP) — Gerrit Cole took a no-hit bid into the eighth inning, Aaron Hicks hit a tiebreaking triple in the ninth as Manuel Margot slammed into the right-field wall and injured a knee and the New York Yankees beat the Tampa Bay Rays 4-2 on Monday night for their 50th win.

Cole struck out 12 and walked three, allowing his only hit when Isaac Paredes singled leading off the eighth.

New York, which lost Jeff McNeil to right hamstring tightness, took three of four from the Marlins and tied the Yankees for the lead with 11 shutouts. The Mets took a 4-0 lead against Trevor Rogers (3-6) with two sacrifice flies, Mark Canha’s bases-loaded walk and McNeil’s scurry home.

Andrew Vaughn matched a career high with four hits, including a solo homer, and the Chicago White Sox celebrated Tim Anderson’s return with an 8-7 victory over the Toronto Blue Jays on Monday night.

CHICAGO (AP) — Andrew Vaughn matched a career high with four hits, including a solo homer, and Luis Robert and Josh Harrison homered as Chicago won for the fifth time in seven games.

Tim Anderson had two hits in his first big league game since May 29. He was activated from the 10-day injured list after being sidelined by a strained right groin.

Toronto lost for the fourth time in five games. Raimel Tapia and Cavan Biggio each hit a two-run homer for the Blue Jays, but José Berríos (5-3) was tagged for six runs and nine hits in four innings.

Lance Lynn (1-0) was charged with five runs, three earned, and four hits in five-plus innings, and Joe Kelly got his first save this season.

Franchy Cordero had three hits, including a two-run single, and Boston won for the sixth time in eight games to climb a season-high six games above .500. Tanner Houck pitched the ninth for his fifth save.

Alex Faedo (1-4) lasted just 4 1/3 innings for the Tigers, who had won two straight after losing six in a row.

ATLANTA (AP) — Orlando Arcia drove in pinch-runner Phil Gosselin from second with a tiebreaking single in the ninth off Camilo Doval (2-3), leading Atlanta past San Francisco.

Kenley Jansen (4-0) stranded runners on second and third in the ninth when he struck out Thairo Estrada and pinch-hitter Brandon Crawford.

The defending World Series champion Braves have won 16 of 18.

Madris became the first Pirates player to have a three-hit game in his debut since Jason Kendall in 1996.

JT Brubaker (1-7) scattered five hits in six scoreless innings for his first win since last Aug. 24, The Pirates took advantage of five walks by rookie Caleb Kilian (0-2), who was tagged for seven runs in 2 1/3 innings.

Tyrone Taylor hit a two-run homer off Miles Mikolas (5-5), and the Brewers regained sole possession of first place in the NL Central. Milwaukee followed an eight-game skid by winning six of eight. Josh Hader worked the ninth for his 20th save in 21 chances.

Kim Ha-seong hit a go-ahead, two-run single in the second for the Padres, who were without All-Star slugger Manny Machado, who sprained his left ankle Sunday in a loss at Colorado.

Darvish (7-3) struggled through a 33-pitch first inning but got out of a bases-loaded jam after allowing just one run. He held the Diamondbacks to one run and four hits, struck out five and walked two. Taylor Rogers pitched a perfect ninth for his 21st save.

Zach Davies (2-4), who pitched for the Padres in 2020, lost his third straight decision over seven starts after allowing four runs and four hits in six innings. He hasn’t won since May 13, against the Chicago Cubs.

Kris Bubic, who came into the game as one of four pitchers in the majors to have at least eight starts and no wins this season, struck out a season-high seven in six innings for his first victory, improving to 1-4. He went six innings and gave up two runs on six hits and walked two.

Taylor Ward had two hits — including a homer in the third inning — and drove in both runs for the Angels. Los

Noah Syndergaard (4-6) worked into the eighth inning for only the second time in 11 starts, but struggled at the end. He allowed five runs on eight hits in 7 1/3 innings, striking out five and walking two.