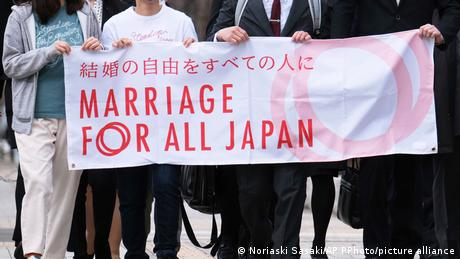 A Japanese court declared on Monday that a ban on same-sex marriage does not violate the country's constitution.

The Osaka District Court made the declaration as it rejected a case brought by three same-sex couples who had argued their right to free union and equality has been violated.

The court denied their claim for compensation and defined marriage as a union between opposite genders — upholding a stipulation in Japan's constitution.

However, the court did state there could be benefits in some sort of framework that recognizes same-sex marriage.

"From the perspective of individual dignity, it can be said that it is necessary to realize the benefits of same-sex couples being publicly recognized through official recognition," the Osaka court said in its union.

The ruling came as a disappointment for activists who have made ground toward wider recognition of same-sex unions in Japan. Pressure from civil society won out in 2021, when a court in the city of Sapporo ruled that restrictions placed on same sex marriages was unconstitutional.

This mirrors mixed rulings on same-sex unions by courts throughout Japan.

But many same-sex couples are not satisfied with a legal status that defines them as "partners" alone.

"Nothing can replace [marriage]. I feel nothing but resentment. It's like they're saying, 'We don't treat you equally but that's OK, right?'," a plaintiff in Monday's case case told AFP news agency.

Partnerships carry a different legal status than a recognized marriage in Japan. Partnership certificates do give same-sex couples hospital visitation rights or the right to rent property together, but do not provide for shared custody of children or the inheritance of property.

Opinion polls by the local government in Tokyo found that 70% were in favor of same-sex marriages. But the Osaka court claimed that the topic is not widely discussed in Japan.

"Public debate on what kind of system is appropriate for this has not been thoroughly carried out," said the Osaka court.

The ongoing debate in Japan mirrors rulings by other courts throughout the region. While Taiwan in 2019 legalized same sex marriages, becoming the first Asian country to do so, South Korea only recognizes the couples as common law spouses.

China does not recognize same-sex marriages or civil unions, but does grant dependent residency status to couples legally married in other countries.

The economics of inclusivity

Some analysts have indicated that Japan's stance on same sex marriage may have residual effects on the country's economy.

"International firms are reviewing their Asian strategy and LGBTQ inclusivity is becoming a topic .... International businesses don't want to invest in a location that isn't LGBTQ-friendly." said Masa Yanagisawa, head of prime services at Goldman Sachs, to the Reuters news agency prior to the Osaka verdict.

Japan will on June 26th meet with the leaders of other G7 countries, all of which have legalized same-sex marriage.