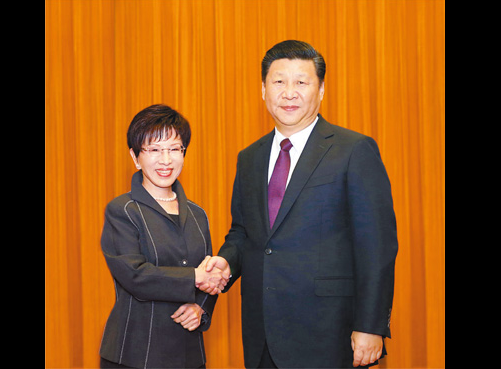 TAICHUNG (Taiwan News) — Kuomintang (KMT) Chair Eric Chu (朱立倫), on his recent trip to the United States, sought to reassure his American hosts that the KMT has “always” been pro-U.S., anti-communist and not pro-China. As parts one through four in this series explain, the reality is far more complicated, and in this column we look into the pro-China elements of the party.

“Some” is probably accurate, but it is important to remember that the KMT views are a spectrum. Broadly speaking, there are four types of KMT members on the issue.

At one end are light blues like former Chair Johnny Chiang (江啟臣), who want to drop the 1992 Consensus, are pro-U.S. and have views that are approaching something resembling mainstream public opinion, but with slightly less aggressively anti-China talking points than the DPP and more talk of “constructive dialogue” with China. Not coincidentally, this appears to be where the Taiwan People’s Party (TPP) is positioning itself, and they are threatening to siphon off voters from this wing of the KMT, which would effectively leave the party even more pro-China and isolated from mainstream public opinion.

At the other end are the deep blue ideologues like the aforementioned Chang, former Chair Hung Hsiu-chu (洪秀柱), former presidential candidate Han Kuo-yu (韓國瑜) and former President Ma Ying-jeou (馬英九). The deep blues can be broadly split into two camps, people like Hung and Chang who want to move quickly to unify with China, and those like Ma who would like to gradually integrate with China and set the stage for unification to become inevitable (see my previous column on how Ma tried to accomplish this).

Then there are the Taiwanese with business interests in China (taishang, 台商), who are also often called “compradors” even within the party. They are keen on good relations with China for business reasons, but their appetite for unification varies.

Finally, there are those who couldn’t care less because they joined the party for reasons like “my parents told me to” and “my family has always been KMT.” These more apolitical types aren’t very active in the party, so don’t have much impact.

The percentage makeup of each group is a bit hard to determine, but there are indications the party is moving more deeply blue. Partly, this is due to the aging of the party as the percentage of party members under 40 is only around 3%, and partly due to poaching of KMT supporters by the more moderate TPP.

There are also some very aggressive deep blue media outlets, including the Want Want China Times and CTi TV News that take instructions from China as well as propaganda operations both domestic and acting on behalf of China’s United Front. In the last few decades, the KMT has also welcomed many Chinese members, often the spouses of Taiwanese.

That being said, there are counter-trends that could push the party lighter blue. Aggressive moves by the Chinese side, especially things like the frequent military plane incursions into Taiwan’s ADIZ and belittling Taiwan on the international stage offend many in the party.

The taishang aren’t as influential as they were as business slows and the business environment in China worsens. Some are leaving the KMT, which means less money on the deeper blue side.

Worse for the KMT, in some opinion polls, the TPP has overtaken them. While the TPP isn’t yet strong enough to take on the party across the board, the party is growing and making inroads.

While the deep blue ideologues aren’t willing to change, there are many in the party who are more concerned with winning power, serving the public or advancing their careers than ideology. After all, a political party at its heart is an open conspiracy to take power, and many in any political party are in it for that.

However, it doesn’t appear the reformers have a whole lot of support in the party. I saw one report that stated that over 80% of party members supported retaining the 1992 Consensus, while among the public at large over 80% disapprove of it.

Without much polling of KMT members available, trying to determine how much weight each faction in the party has requires some tea leaf reading. One example is to look at the results of the last chair election.

Johnny Chiang, the light blue reformer, only got just shy of 19% of the vote. The deep blue unificationist Chang Ya-chung got around 33% of the vote.

Eric Chu, who talked at times like a reformer during the campaign, did emphasize that he intended to keep the 1992 Consensus and he was generally viewed as a moderate. During his previous presidential run and his previous term as KMT chair he didn’t make any major changes ideologically.

Chu won with just shy of 46% vote. He probably took some of Chiang’s supporters, who viewed him as a safer bet to hold off Chang.

Would it be accurate to say that the 33% who voted for Chang represent the percentage of party members who are deep blue? Possibly, though there was a lot of excitement around his insurgent run, so his motivated supporters might have come out in higher numbers.

The overall turnout was 50% in that election, and we can’t say for sure what those who didn’t vote think, or if they are in the apolitical camp. However, the voting results suggest that the deep blues and those in the middle are still a majority, and out of step with mainstream public opinion.

While we don’t have much polling on KMT members, there is more information on KMT voters.

For American audiences, a My Formosa poll from March inquires about KMT supporters' views of the U.S. When asked if the U.S. values (or attaches importance to) Taiwan, 40% said yes, and 58% said no. Among the general public, 59% said yes and only 34% said no.

An educated guess is that the hardcore deep blue ideologues make up roughly a third of the party, and no more than 40%. The light blue camp is probably between one-fifth and one quarter.

The remainder are likely between the two on the spectrum, including many of the taishang compradors.