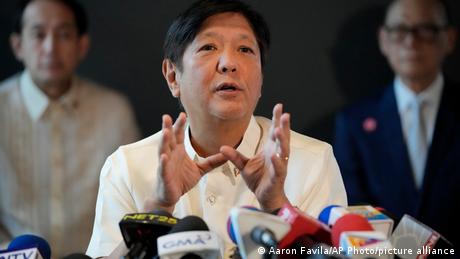 The son of a former dictator and soon-to-be president of the Philippines, Ferdinand Marcos Jr, said on Monday that he will also serve as the country's secretary of agriculture when he takes office at the end of the month.

His announcement came as he expressed concerns about rising food prices in a country that is one of the world's biggest importers of rice and is in the bottom half of the world's economies by GDP per capita.

Although not unheard of, the decision to take on an extra portfolio alongside the presidency is highly unusual.

In his address on Monday, Marcos Jr. blamed "outside forces" for what he warned could lead to food shortages and ever-higher prices.

"From the very beginning, I have always said that agriculture is going to be a critical and foundational part of our economic development or economic transformation as we anticipate the post-pandemic economy," said Marcos Jr — who is known as Bongbong by his supporters.

"The problem is severe enough that I have decided to take on the portfolio of secretary of agriculture at least for now, and until at least we can organize the department," he said.

Marcos Jr. pledged to bring down the price of rice by more than half to 20 pesos (€0.35, $0.37) per kilogram during his presidential campaign. He won a landslide victory in May and will take office on June 30.

Rolando Dy, agriculture economist and executive director of the Center for Food and Agribusiness at the University of Asia and the Pacific, told Reuters that slashing prices as much as Marcos plans would be "impossible."

The Philippines' national debt is already more than 50% of GDP and has been rising rapidly in the past few years. Unless global food prices normalize, having been at or near record levels for months, only government subsidies could rein in prices, and there's little to suggest authorities in Manila could afford this even over a short period.

Marcos Jr.'s political rise has come thanks to his effective rebranding campaign heavily utilizing social media and despite his father's dictatorship that was ended with a popular, pro-democratic uprising in 1989 which drove the elder Marcos into exile in the USA.

His vice-president, Sara Duterte, is the daughter of the outgoing President Rodrigo Duterte, whose brutal crackdown on drug users left thousands dead.

The president-elect has so far appointed two dozen cabinet members, including the ministers of finance, trade and economy.

The Philippines, like much of the rest of the world, is suffering from two years of pandemic and lockdowns as well as the highest rates of inflation in three years on top of the rising price of food, driven in part by the Russian invasion of Ukraine.