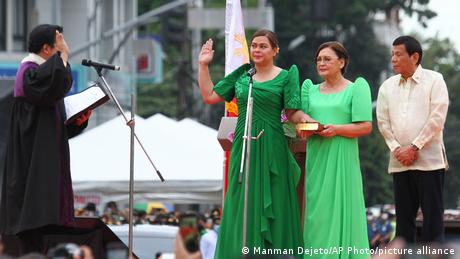 Sara Duterte, daughter of the outgoing populist president of the Philippines Rodrigo Duterte, was sworn in as the country's 15th vice president on Sunday.

"The voice of 32.2 million Filipinos was loud and clear — with the message to serve our motherland," she said, referring to the votes she received.

Duterte, 44, won a landslide victory in the May elections despite her father's human rights record while he was president that saw thousands of drug suspects gunned down.

Rodrigo Duterte's presidency has been marked by a brutal anti-drugs campaign that led to thousands of suspects shot dead by police or vigilantes. The drug killings are being investigated by the International Criminal Court as a possible crime against humanity.

Questions surrounding her father's track record do not appear to have swayed the new vice president.

"I'm not the best or the most intelligent person in the Philippines and the world but nobody can beat the toughness of my heart as a Filipino,” said Duterte in a speech after she took her oath before a Supreme Court associate justice.

Sara Duterte was the running mate of Ferdinand Marcos Jr., who also won in the May 9 elections and will be sworn in as the country's president on June 30, when their six-year term begins.

Like her father, Duterte trained as a lawyer before entering politics in 2007 when she was voted in as her father's vice mayor in Davao, 1,000 km (600 miles) from the capital Manila. She succeeded her father to become the first female mayor of Davao in 2010.

While Sara Duterte refused calls by her father and supporters to seek the presidency, she has not ruled out a future run. One of her brothers, Sebastian Duterte, will succeed her as Davao mayor, and another brother, Paolo Duterte, won a seat in the House of Representatives in the May 9 elections.

The electoral triumphs of Sara Duterte and Marcos Jr. have alarmed left-wing and human rights groups because of their failure to acknowledge the massive human rights atrocities that took place under their fathers, including late dictator Ferdinand Marcos. Ahead of their election victories, Amnesty International called for a "dramatic course correction."