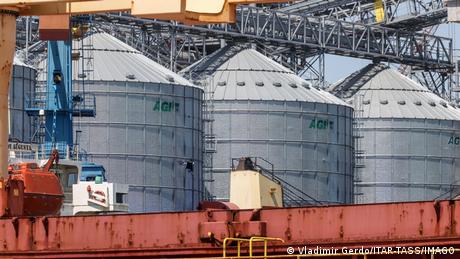 "We call on Russia to deblockade the [Ukrainian] ports... It is inconceivable, one cannot imagine that millions of tonnes of wheat remain blocked in Ukraine while in the rest of the world people are suffering hunger," Borrell told reporters.

He accused Russia of weaponizing "the hunger of the people" and said Moscow would have to be held "accountable" for its actions.

German Foreign Minister Annalena Baerbock said that Berlin will support Poland and Romania in adapting their rail networks to help bring the millions of tonnes of grain out of Ukraine.

"The railway tracks need to be modernized, we need the right cargo wagons - the German government is working on this with many other actors," she said on arrival at the EU foreign ministers meeting.

"It is clear that, in the end, we will certainly not be able to get out all grain but if we even just manage to free part of it, on various routes, then this will help as we are facing this global challenge."

Baerbock added that Germany will host a conference on Friday on the question of securing food exports from Ukraine to "improve the humanitarian situation worldwide and to set global food security on a more stable footing."

Ukraine is one of the world's largest exporters of key goods such as wheat and vegetable oil. The restriction of these goods from the global market — along with rising fuel prices — has sent food prices skyrocketing.

The EU has been working on solutions to get grains and other goods out of Ukraine to be exported to other countries.

The bloc has given its support to a UN plan to mediate an agreement between Russia, Ukraine and Turkey in order to allow ships to safely access Ukraine's ports in the Black Sea.

The EU has also had to contend with claims by Russia that Western sanctions are to blame for food price hikes and shortages in Africa and the Middle East.

Borrell on Monday rejected this narrative, saying: "I want to insist that it's not the European sanctions that are creating this crisis. Our sanctions don't target food, don't target fertilizers."