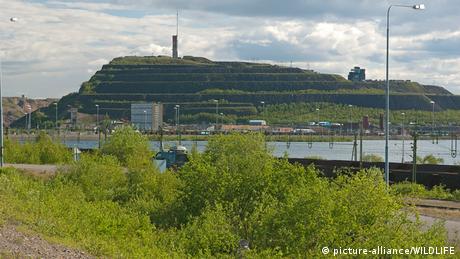 The European Union wants to decrease its dependency on Russian fossil fuels while accelerating its decarbonization effort. Metals and critical raw materials will play a pivotal role. Minerals, especially lithium, are most needed for clean-energy technologies. Relevant mining activities are concentrated in Asia, Oceania and South America.

Finland and Sweden, the two European countries currently applying for NATO membership, have a long mining tradition and could help solve the EU's deficit, but question marks remain.

"We are the most important mining countries in the EU. Sweden alone produces over 90% of all the iron ore produced in the EU, Maria Suner, CEO of the Swedish Association of Mines, Mineral and Metal Producers (Svemin), told DW. However, that's just a little over a quarter of what the bloc needs, meaning that the EU still has to import 70% of its iron ore, she added.

Finland and Sweden also share the mineral-rich Fennoscandian bedrock. According to Suner, the solid rock beneath the Scandinavian and Kola peninsulas has the potential to provide everything that's on the EU list of critical raw materials.

The European Commission compiled a list of critical raw materials (CRMs) in 2011. Economic value and supply risk are the two criteria used to determine the importance of the materials. The list is getting longer.

Russia's invasion of Ukraine is the major reason for Finland and Sweden to apply for NATO membership, and arguably, to step up mining in the medium term.

Svemin's CEO says the focus on mining increased due to the COVID pandemic and ensuing supply chain disruptions, but more so after Russia invaded Ukraine. It has added to the increase in demand, pushing raw materials prices to a new high.

China is the top producer of graphite and rare earth materials. According to data from the International Energy Agency, it also refines 87% of the rare earths, 65% of cobalt, 58% of lithium, and 35% of nickel. Russia is the second-most-important country in the world for nickel extraction and the third-most-important for cobalt extraction.

"If there's more support for mining activities in Europe, I don't see that as a result of Russian hostilities. It's more a question of whether Europe has woken up to the fact that it lacks metals," Pekka Suomela, executive director of the Finnish Mining Association (FinnMin), told DW.

Land competition is always an issue in Nordic regions with a focus on forestry. Increased mining is opposed by many environmentalists citing the need to protect biodiversity.

In March, when the Swedish government allowed the exploitation of the Scandinavian country's largest unexploited iron ore deposit, Swedish climate protection activist Greta Thunberg and the Fridays for Future movement said Sweden was "waging a war on nature."

Finland, Norway, and Sweden are the least densely populated countries in Europe, which might theoretically be a plus for mining activities. Nonetheless, many scarcely populated areas are protected.

"Almost half of the Swedish territory is reindeer herding area for the Sami people, the only Indigenous people in Europe," said Suner. "But the area needed for mining is very limited and we know how to minimize the impact."

In the EU, it can take up to 25 years from the exploration phase to the start of commercial mining. Svemin has proposed 27 reforms, including shortening the permission procedures. Worries about the medium-term environmental impact often clash with long-term decarbonization efforts.

While EU member states are responsible for mining legislation, Brussels deals with aspects related to health, water and land usage.

The current geopolitical situation might increase social acceptance, but caution is needed. According to Suomela, the European Union must be careful not to put too much pressure on any single country to avoid local resistance that could easily shift public opinion.

Another possible future obstacle has to do with energy prices. They remain fairly moderate in northern Sweden and Finland, well below the levels reached in central Europe. But an increase in mining activities requires coherent investments in energy assets.

"The mineral and mining sector is planning for a tenfold increase in electricity use by 2050," Suner commented. "Additionally, we have other projects for battery production and fossil-free steelmaking. Such projects are not covered by the electricity production we have in Sweden today."

Estonia, another country bordering Russia, is active in the cleantech supply chain, hosting the only commercial rare earth processing facility in Europe. The facility is owned by Toronto-based rare earth materials technology company Neo Performance Materials. The company launched an initiative in 2020 to expand the supply of rare earth feedstock to their Sillamae processing facility near the Gulf of Finland.

Constantine Karayannopoulos, Neo's president and CEO, told DW that the war in Ukraine caused refining companies to look more closely at their global supply chains. "Neo is no exception," he explained, recalling that its supplier in Kola, the Russian peninsula, had been a reliable supplier for over 40 years.

Right now, it looks like demand will increase. According to the European Association of Metals (Eurometaux), lithium usage in clean technologies could increase by a staggering 2,109% by 2050. Demand for dysprosium, tellurium and scandium is expected to more than double over the next 30 years.